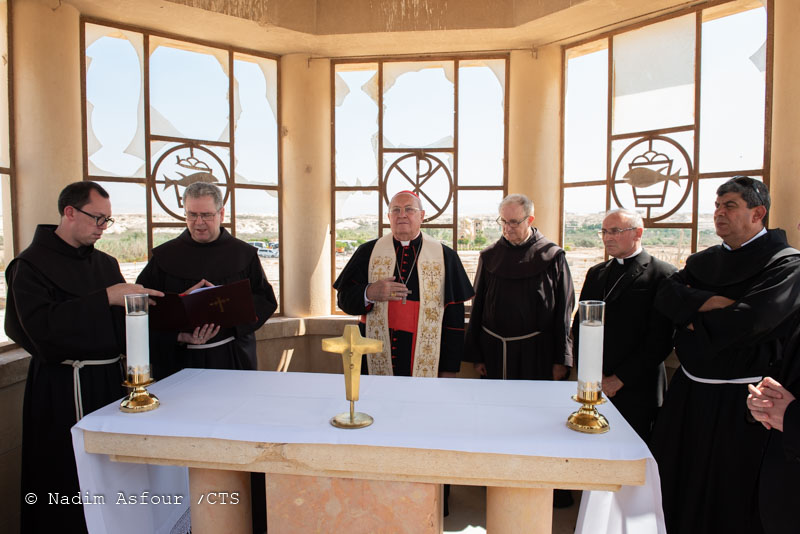 Msgr. Leonardo Sandri, during his visit to the Franciscan chapel at the site of the Baptism of Jesus, October 2019

Every Holy Week, we spiritually become pilgrims to Jerusalem and contemplate the mystery of our Lord Jesus Christ, Dead and Risen. In his Letter to the Galatians, the Apostle Paul, who had a living and personal experience of this mystery, goes so far as to say: “The Son of God loved me and gave Himself up for me!” (Gal. 2:20). What the Apostle lived is also the foundation of a new model of fraternity that derives from the work of reconciliation and pacification among all peoples carried out by the Crucified One, as St. Paul writes in his letter to the Ephesians.

In 2020, Pope Francis wanted to remind us of the consequences of this gift of reconciliation and he did so through the encyclical “Fratelli tutti”. With this text, the Pope, starting from the prophetic witness proposed by St. Francis of Assisi, wants to help us to consider all our relationships – religious, economic, ecological, political, and communication – in the light of the principle of fraternity. The foundation of our being all brothers and sisters is precisely on Calvary. There, through the greatest gift of love, the Lord Jesus halted the spiral of enmity, broke the vicious circle of hatred and opened for every one the way of reconciliation with the Father, among us, and with the creation itself.

The deserted streets around the Holy Sepulchre and Old Jerusalem echoed the empty and wet Saint Peter’s Square, which the Holy Father crossed on 27 March 2020 on his way to the Crucified One, before whom the whole world fell on its knees, imploring an end to the pandemic, and making everyone feel united by the same mystery of pain.

It has been a year of trials and so too for the Holy City of Jerusalem, for the Holy Land and for the small Christian community that lives in the Middle East that seeks to be the salt, light and leaven of the Gospel. In 2020, the Christians of those lands suffered an isolation that made them feel even more distant, cut off from vital contact with the brethren from various countries of the world. They suffered the loss of work, due to the absence of pilgrims, and the consequent difficulty in living with dignity and providing for their families and children. In many countries, the persistence of war and sanctions compounded the effects of the pandemic. In addition, part of the economic aid that the collection pro Terra Sancta guaranteed every year also fell short, due to the added difficulties involved in carrying it out in many countries.

Pope Francis presents the figure of the Good Samaritan to all Christians, as a model of active charity, of enterprising and supportive love. He also encourages us to reflect on the different attitudes of the characters in the parable to overcome the indifference of those who see their brother or sister in difficulty and pass on: “Which of these persons do you identify with? This question, blunt as it is, is direct and incisive. Which of these characters do you resemble? We need to acknowledge that we are constantly tempted to ignore others, especially the weak. Let us admit that, for all the progress we have made, we are still “illiterate” when it comes to accompanying, caring for and supporting the most frail and vulnerable members of our developed societies. We have become accustomed to looking the other way, passing by, ignoring situations until they affect us directly” (Fratelli tutti, 64).

May this year collection pro Terra Sancta be an opportunity for everyone not to ignore the difficult situation of our brothers and sisters of the Holy Places but rather to lighten their burdens. If this small gesture of solidarity and sharing (Saint Paul and Saint Francis of Assisi would call it “restitution”) fails, it will be even more difficult for many of them to resist the temptation to leave their country, more demanding to support the parishes in their pastoral and educational work and harder to sustain the social commitment to the poor and suffering. The sufferings of the many displaced people and refugees who have had to leave because of war call for an outstretched helping hand to pour the balm of consolation on their wounds. We must not give up on taking care of the Holy Places that are concrete proof of the mystery of the Incarnation of the Son of God, and the offering of His life for us and for our salvation.

In this unusual scenario, marked by the absence of pilgrims, we feel the duty to once again make our own the words that the Apostle of the Gentiles addressed to the Corinthians two thousand years ago, inviting you to a solidarity that is not based only on philanthropy but rather on Christological motivations: “Indeed, you know the grace of our Lord Jesus Christ: though rich, He made Himself poor for you, so that through His poverty you might become rich” (2 Cor. 8:9). And after recalling the principles of equality, solidarity and the mutual exchange of material and spiritual goods, the Apostle adds words, as eloquent then as now, which do not need any comment: “Keep this in mind: he who sows poorly will reap poorly, and he who sows bountifully will reap bountifully. Let each one give according to what he has decided in his heart, not with sadness or by force, because God loves those who give with joy. Moreover, God has the power to make all grace abound in you so that, always having the necessary in everything, you can generously perform all good works.” (2 Cor. 9:6-8).

To Your Excellency, the Priests, the Religious and the Faithful who in various ways strive for the success of the Collection, in fidelity to the participation that the Church requires of all her children, we have the joy of transmitting the deep gratitude of the Holy Father, Pope Francis.

Finally, as we invoke abundant Divine blessings on your Diocese, we offer our most fraternal greeting in the Lord Jesus.

Leonardo Card. Sandri
Prefect of the Congregation for the Oriental Churches