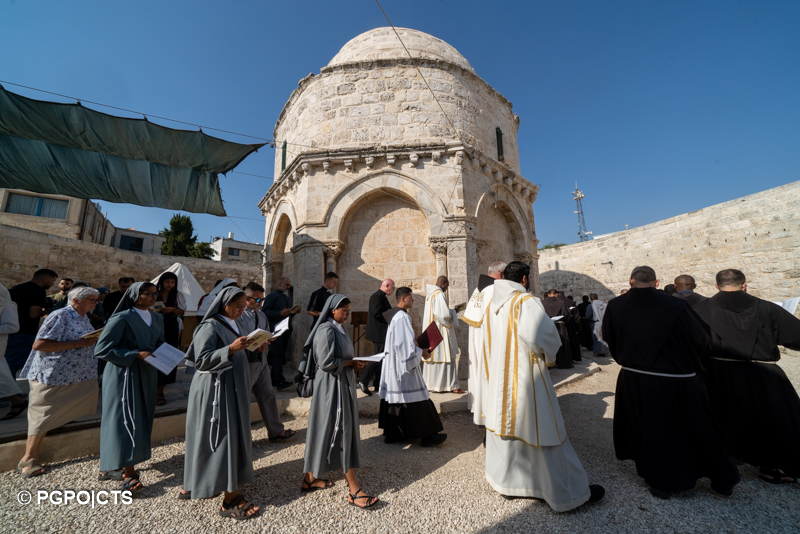 The celebrations that accompanied the solemnity of the Ascension of the Lord in Jerusalem started on Wednesday 25 May. The 'solemn entrance’ into the shrine of the Ascension, on the Mount of Olives, inaugurated the ceremonies of the vigil: the first vespers, compline and procession of the Franciscan religious around the Crusader edicule. Prayers of the Office continued in sequence during the night at the same site, while on the morning of 26 May, the solemn mass was celebrated, presided by the Custody’s Vicar, Fr. Dobromir Jasztal, ofm.

Ascension represents the last terrestrial event in Jesus’s life, according to the narration of the Evangelist Luke – the author of the Gospel of the same name and the Acts of the Apostles - who describes the final rise to heaven of Christ, from which he will return only at the end of time, in what is called the Parousia, or the second coming. The Letter to the Hebrews, the second reading of the liturgy of the Word, recalls that the ascension to heaven is, effectively, the priestly act with which Jesus “did not enter into a sanctuary made by hands, a copy of the true one, but heaven itself, that he might now appear before God on our behalf.” (Hebrews 9,24).

On the morning of Thursday, 26 May, the solemn mass opened with a song that resumes the episode of the Ascension described in the Acts of the Apostles: "Men of Galilee, why stare at the heaven? As you saw him ascend to heaven thus the Lord will return, hallelujah."

In his homily, Fr. Dobromir illustrated how the liturgy of the Word of the day helps us understand the situations to which the authors of the New Testament connect the Ascension of Jesus to heaven. In the first place, the promise of the Holy Spirit: “And behold, I am sending the promise of my Father (Luke 24,49), “In a few days, you will be baptized with the Holy Spirit” (Acts 1,5). "From the Ascension of the Lord, the Apostles therefore have to wait for the gift of the Spirit, the gift that is essential for their life and their mission, as the promise of the Spirit is connected with the mandate of the mission and the efficacy of the testimony of the disciples.”

Insisting on the metahistorical role of this mandate, in his homily, Fr. Dobromir said, "The task of communicating to his brother the salvation worked by Jesus in His Death and Resurrection was entrusted to the disciples of then and to every disciple of today.”

Going on to look at the passage in the Gospel, the Custody’s Vicar continued, it can be seen that the Lord leaves while blessing, as Abraham, Isaac, Jacob and all the Patriarchs did, handing on to their sons the mission received. "The good Father is not he who ensures a quiet life for his sons and tries to solve all their problems. The father educates his sons so that they are able to live their lives and carry out their mission.  Jesus too, in blessing, hands over to the disciples and to each one of us the mission received and completed, but which still has to be communicated to the whole world.”

Before the assembly, which in the end also included a large number of pilgrims -  an encouraging sign of their return to the Holy Land - Father Dobromir exhorted the faithful to stand in front of the mystery of the Ascension of Jesus to heaven, exactly as the first disciples did: "let us adore and, above all, let us open our hearts to the gift of the Spirit so that He can act in us and through us, as he acted in Jesus and in the disciples. Let us return to our daily occupations animated by deep joy and let the Work of Gid shine through in our lives, faithful to the mission received."

The site where the celebrations were held has been a place of worship and pilgrimage since the very first centuries of the Christian era. Shortly after the death and the resurrection of Jesus, the first Christian communities started to gather secretly in a small grotto on the Mount of Olives to commemorate the Lord’s ascension to heaven. This secrecy did not end until 313, when the Edict of Milan on the freedom of worship passed by the Emperor Constantine granted full religious freedom to Christians.

In the second half of the 4th century, the Roman noblewoman Poimenia built the first church of the site on the southern highest point of the Mount of Olives. Since 1198, when it was bought by the emissaries of Saladin, the place has remained the property of the Islamic waqf of Jerusalem and the building, previously built by the Crusaders, was converted into a mosque, but is not used for worship. Inside the small church -  which due to its tiny dimensions is also called “edicule” – there is a rock on which the footprint of Jesus’s right foot is traditionally recognized. 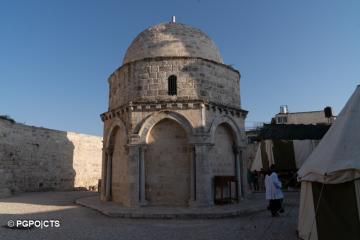 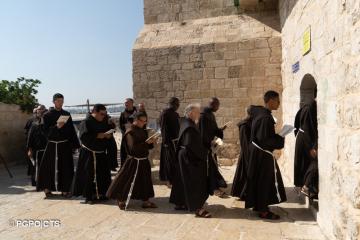 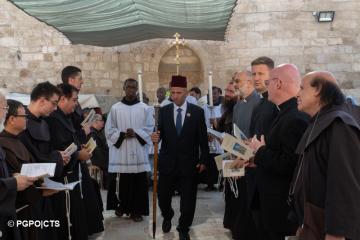 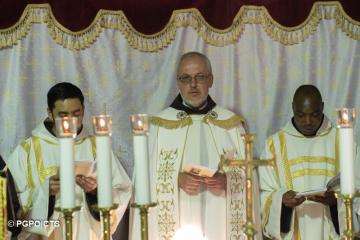 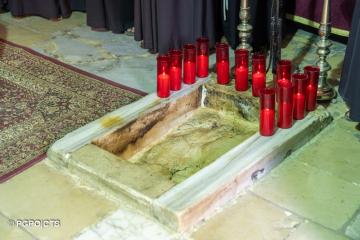 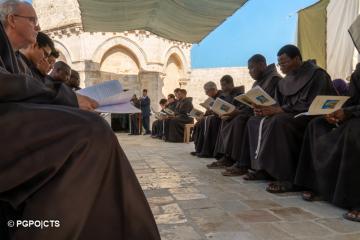 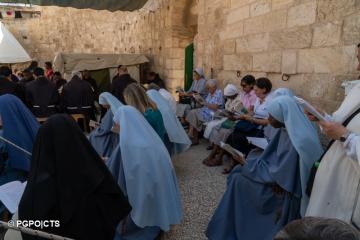 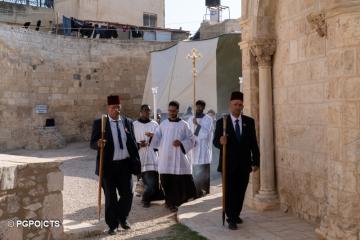 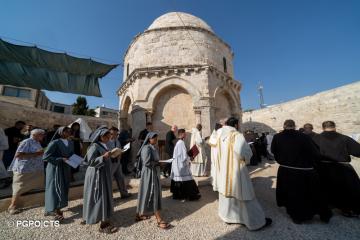 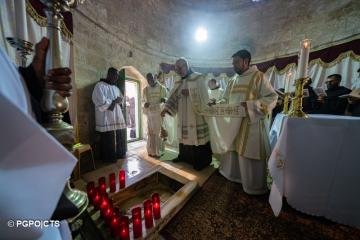 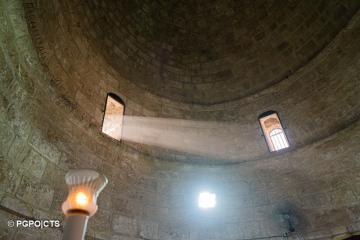 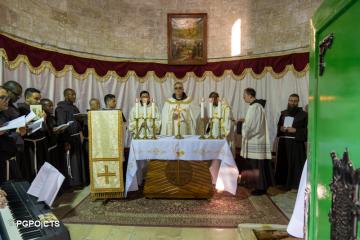 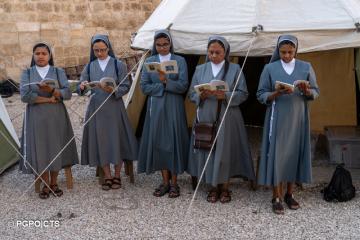 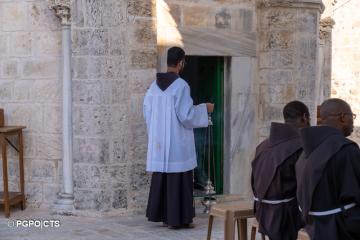 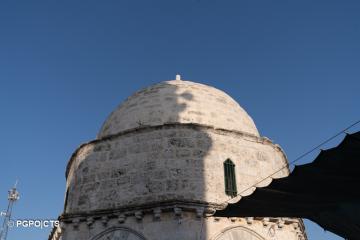 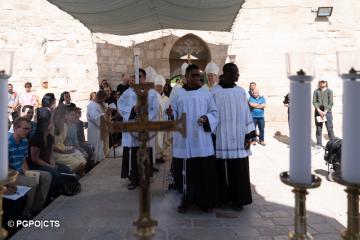 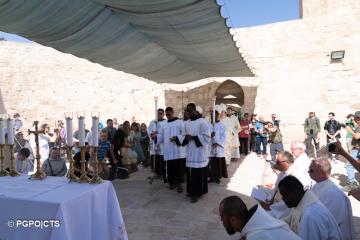 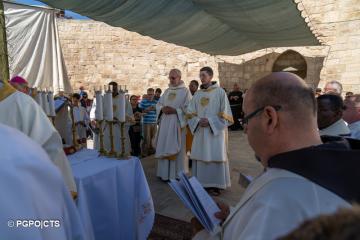 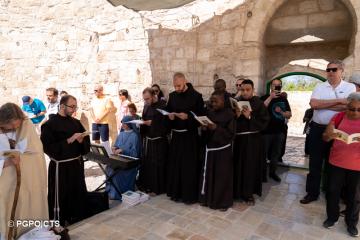 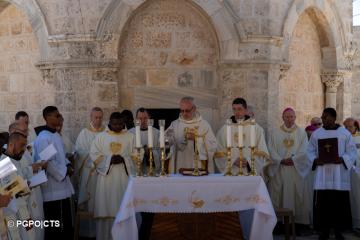