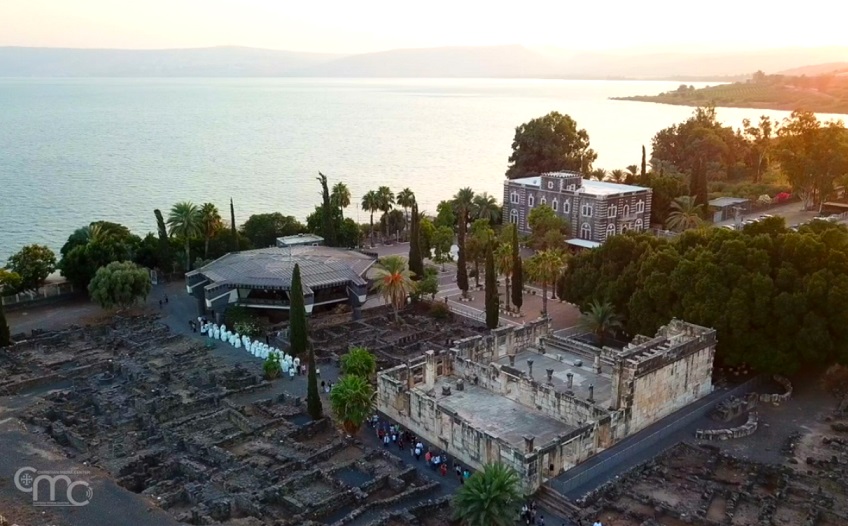 On October 9, the Custody of the Holy Land commemorated the presence, preaching and miracles of Jesus in his city of Capernaum, located on the shores of Lake Tiberias. There, our Savior Jesus Christ dwelt, called, healed, forgave, taught and worked miracles.

"And then that beautiful extraordinary narrative found in chapter six of St. John which is the sermon that Jesus gives, the sermon on the Bread of Life."

The festive Mass on this occasion was presided over by Brother Francesco Patton, Custos of the Holy Land, with the participation of a group of priests and monks, in the presence of a large crowd of faithful from Jerusalem, Nazareth and neighboring cities and towns.

Father Zaher Abboud said in his homily that "if we do not experience God's personal mercy every day in our lives, we will not be able to forgive others. The voice of Jesus is calling and the voices of the world are trying to silence his voice in our hearts. Hopefully, we can recognize his voice in our lives and follow him to eternal happiness."

BADE’A ATEEK
Nazaret
"Indeed, the city of Capernaum took up much of Christ's life. He experienced pride and anger there. Jesus was so angry that he said, "And you, Capernaum, will you be lifted up to heaven? Down to hell shalt thou fall!" He said to Peter's mother-in-law, "Arise, be healed," even though she was an old woman. And the Bible tells us, "She got up and served them." All of this greatly strengthens our faith in Jesus, in his truth, and gives much meaning to our lives."

In the city where the Gospel tells us so many beautiful stories, Franciscan excavations have unearthed small neighborhoods with basalt stone houses and the remains of what was once a synagogue where Jesus went and taught the crowds.

Excavations revealed an octagonal Byzantine church, confirming the diary of the fourth-century pilgrim Egeria, who says: "A church was made on the house of the Prince of Apostles, but the walls of the house still remain as they were."

Br FRANCESCO PATTON, ofm
Custos of the Holy Land
"This place is also very important for the Christians of the Holy Land, because these places are part of their identity. The Christians who today live in the various villages here in the Galilee as in Jerusalem or Palestine. They are the direct descendants of those Christians who 1,000 years ago, and more than 1,000 years ago, were also here in Capernaum praying, testifying that they believed in Jesus Christ, and carrying on an unbroken chain even of Christian life that has come down to us today."

The life and miracles of Jesus in Capernaum open our minds, dispel the darkness in our lives and testify that he is the way, the truth and the life.

In Capernaum, the place of the Eucharistic Promise

Capernaum: the Feast of presence, preaching and prodigies

Sea of Galilee: the Lake of Jesus