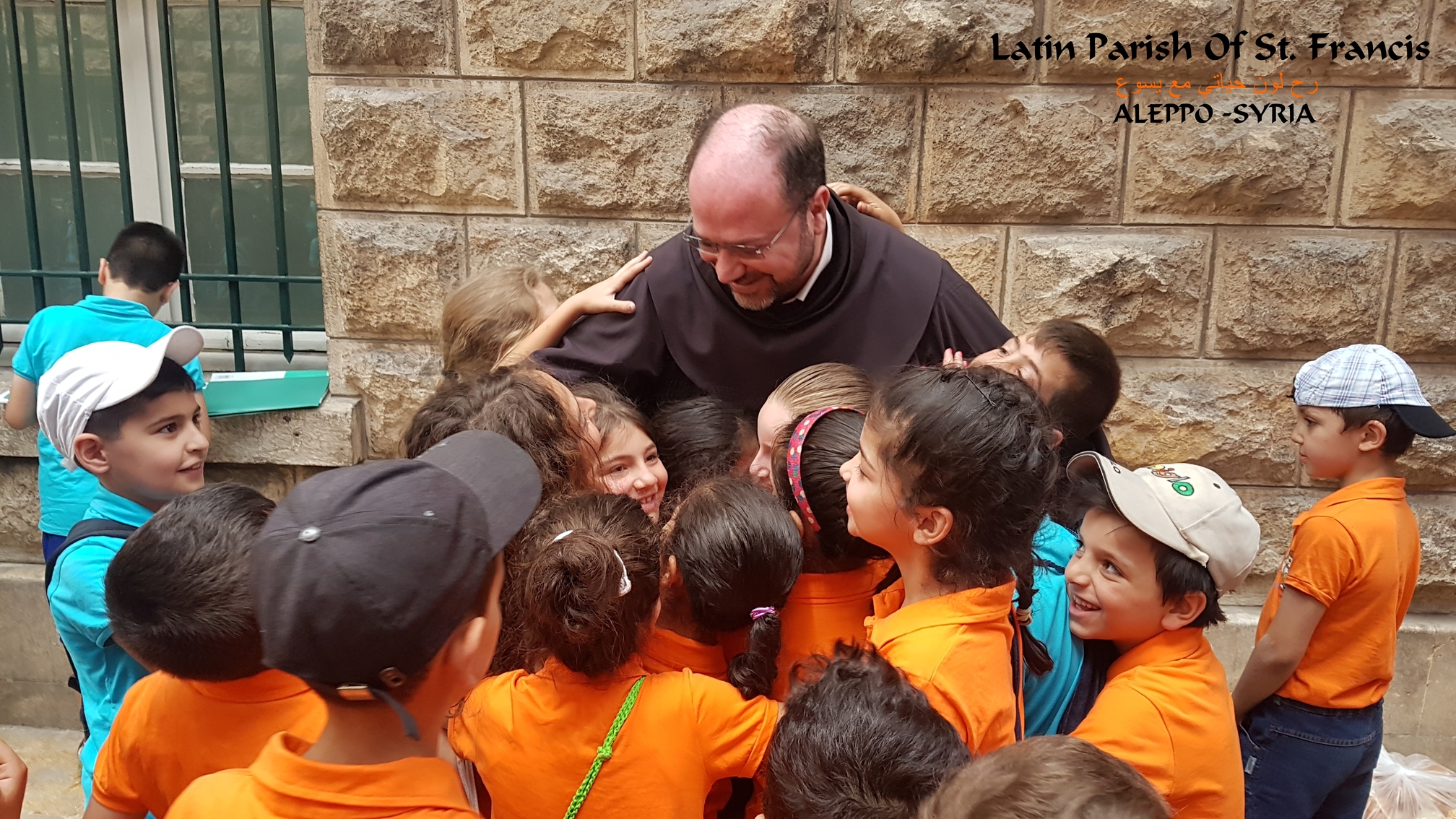 The children of the Latin parish St. Francis of Aleppo with the parish priest Fr. Ibrahim Alsabagh

Outside the Latin parish of “St Francis”, the ruins of the buildings destroyed by ten years of war in Syria, resist unchanged, reminding us that Aleppo is still a wounded city. Even though the spotlights of the world are no longer focused on the Syrian crisis, the people of Aleppo continue their daily battle, to rebuild their homes, families and hearts. The Franciscan friars of the Custody of the Holy Land, who serve the Latin parish of Aleppo, know all the blindest sufferings and the most unhoped for joys. “Never as in these years have I felt the despair of people,” says the parish priest Fr. Ibrahim Alsabagh, who has been in Aleppo for over seven years, together with three other friars. “I remember that for every person who died because of the missiles, which fell between 2014 and 2016, I had to work in every way possible, for at least three weeks, to restore hope in the hearts of those who were left behind. Until today, never in my life had I heard so many elderly people say, “Let me die” or “I don’t want to live any longer.”. I have heard many people cursing the day they were born, like Job. Even today, our difficulty or rather, our challenge, is to rekindle hope.”

Before the Syrian crisis, the Latin parish of Aleppo had 1,800 families but, following the emigration of about two-thirds of the families, today there are about 3,000 faithful (608 families). “Unfortunately, people’s situations have worsened and, according to our statistics, 92% are living below the poverty line,”  continues Fr. Ibrahim. “There are many reasons for this precarious economic situation: the division of the country, the frantic exploitation of its underground resources of gas and oil, the endless crisis that has been going on for more than ten years, the destruction of the industrial facilities of Aleppo, corruption, Covid, the Lebanese crisis. All these factors contribute to making the people’s living conditions inhuman.”

In, Aleppo, where winters are very cold, there is  no diesel oil for heating or gas for cooking, while bread can be bought only in small amounts and after queuing for hours. In the past two months, because of the cold and the impossibility to keep warm, 60% of the elderly have passed away, to whom the friars took communion in their homes.

In the impossibility of having any health insurance and, while the hospitals remain semi-destroyed and without medicines, Covid continues to infect and kill many people. “Those who want to save themselves go to private clinics, but we know examples of people who, to  pay for a stay of a few days in intensive care, have had to sell their homes, for half of their real price,” continues the parish priest of Aleppo.

In this situation of suffering, the parish of St Francis tries to offer spiritual support every day which becomes concrete in the Word, in the sacraments and in the community and  personal accompaniment of the faithful. “Since I arrived, I have seen that to support the faithful who are living through this time of ordeal, it is necessary, first of all, to give them the Word in abundance.” says Fr. Ibrahim. “We have given catechism to adults for four years and then we continued with the social doctrine of the Church. Never, as in these years have we worked on the quality of the catechism for children.”.

Every week, the six Sunday Masses and the pastoral services address more than two thousand people, looked after by 11 employees and 104 volunteers. Alongside the spiritual support, the material support is also very strong. There were 42 active projects in 2021 of which 25 for all the Christians of different rites,  in “sophisticated coordination” with their Churches in  order to cultivate communion and avoid implementing parallel initiatives. We are talking about projects of basic needs: economic support for the families, distribution of food parcels, financing medical expenses and operations, distance adoptions of children, legal advice and covering legal expenses.

“A very topical project at the moment is called  Five loaves and two fish and guarantees a hot meal for 1,000 people a day. It is also aimed at our Muslim brothers who are in need. We are also trying to help young people who want to get married, with the project  Wedding gift, with which they can pay rent for one year or buy furniture for their home,” continues Fr. Ibrahim.

The initiatives supporting education  are also fundamental, with after-school activities for 90 pupils and grants for university students.

According to the Franciscans’ statistics, 25,568 people go every month to the various help and aid centres of the parish, also supported by the NGO Pro Terra Sancta.

The reconstruction projects include those aimed at covering the costs to repair damaged homes (since 2016 about 1,700 homes have been repaired), microcredit for the young and unemployed and support initiatives for parishes and priests in need.

“The haemorrhage of emigration that affected our community (two-thirds of the richest families have emigrated) has almost stopped in the past two years,” explains the parish priest of St Francis’s church.  “We urge those who have left and those who are getting ready to leave not to neglect their faith while they are far away, to take part in the life of the local church, not to forget their parents and relatives who are still in need.”

Despite the difficulties, Fr. Ibrahim also has stories of hope to tell: “Many years ago, after a meeting with young university students I had encouraged to dream and to plan their marriage in the future, a young man of twenty-one told me he had a girlfriend of eighteen and he was ready to marry her as soon as possible. This gave me great consolation and also made me smile, because it made me think that, after all the bombings of that period, there were still some normal people.” After an accompaniment of some years, the two youngsters got married and their baby girl was welcomed into the church very recently, during the feast of the Presentation of Jesus at the Temple.

“Joking with some of our parishioners recently, I said that  we are a parish that is full of suffering and “tragedy,” but at the same time “full of grace”  because the Lord has never abandoned us,” says the parish priest of Aleppo. “Our suffering, that of more than ten years of crisis, is not over yet. The black clouds are still present over our country. We are a nation on paper, one of the many, in the hands of “great global players” who are waging the “third world war piecemeal” (Quotation Pope Francis). With the faith and hope that He gives to His sheep, my prayer is raised so that He can send friars who love the flock and are not afraid of giving themselves totally to the service of people.” 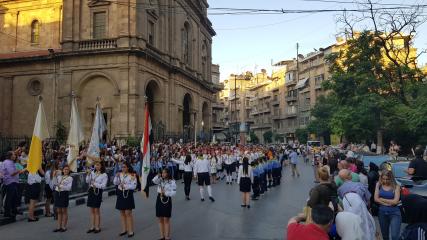 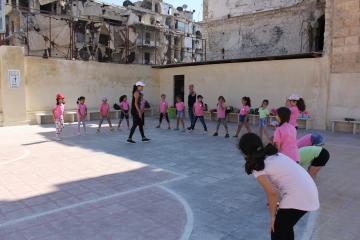 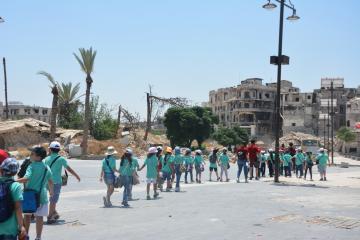 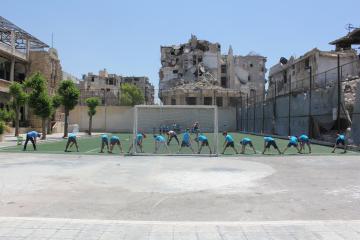 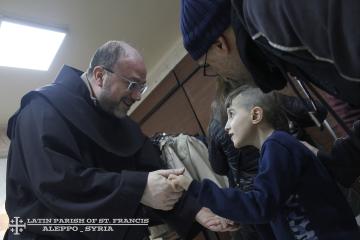 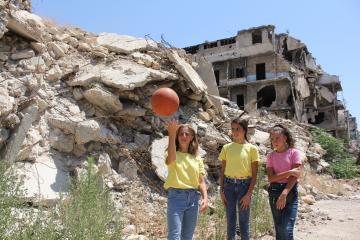 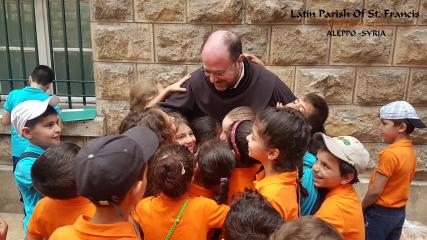 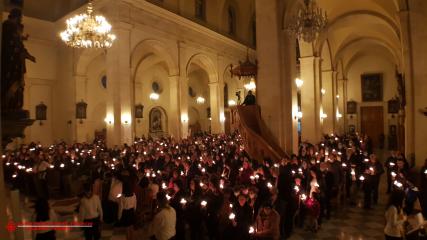 The Seventh Franciscan March in Syria