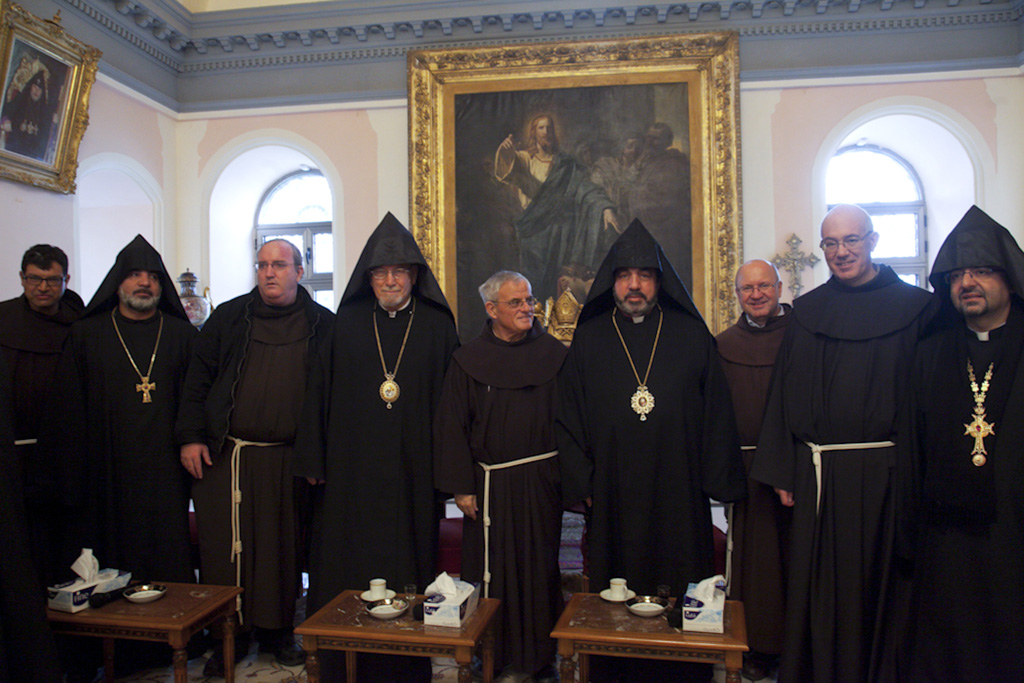 Tuesday, January 29, the Custody of the Holy Land, represented by its Vicar, Fra Artemio Vítores, paid a visit to the Armenian Patriarchate to congratulate His Beatitude, Nourhan Manougian ler, elected January 24, 2013, as the 97th Apostolic Armenian Patriarch of Jerusalem, succeeding Torkom Manougian II, who died on October 12, 2012, at the age of 93.

In speaking to Fra Artemio, the Patriarch renewed his desire that the two fraternities maintain the good relations that have united them for centuries.

In fact, throughout history and in spite of theological debates, the two communities have been able to establish fraternal bonds of understanding, making an interchange of services when the political situation of the country was precarious.

The Franciscans are particularly grateful to the Armenians, who accepted them after their expulsion from the Cenacle in 1551, protecting the friars for eight years. The Armenians, in fact, offered property to the friars within the walls of the Quarter, not far from the Convent of Monastery of the Archangels.

Recently, this hospitality was in part returned to the Armenians, when H.B. Torkom Manougian II was able to complete his long life at the Infirmary of the Convent of St. Saviour in Jerusalem; He was visited regularly by his fraternity, as well as by the friars living in the Infirmary, who surrounded him each day with their prayers.

Certainly, the custody will be present on the day of the official Enthronement of His Beatitude Nourhan Manougian. This day will provide a new opportunity for joyful sharing.