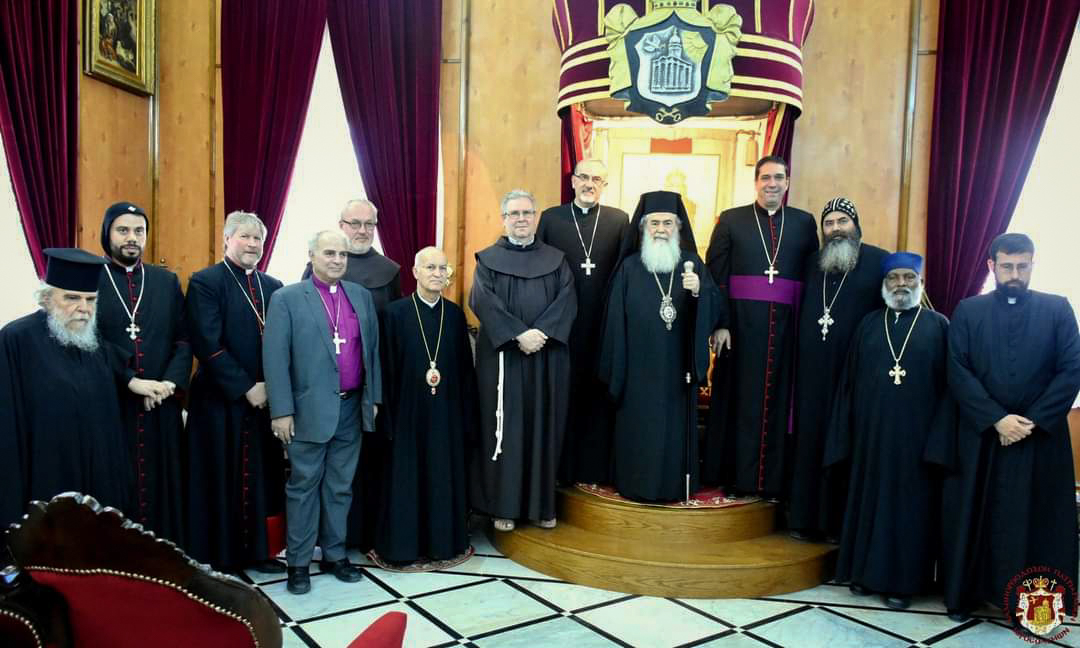 We, the Patriarchs and Heads of Churches in Jerusalem, extend our joyful Easter greetings from Jerusalem, the Holy City of the Resurrection, to both our local congregations and to faithful Christians around the world. As the angel declared to the women who had gone to Christ’s tomb in order to grieve: “Why do you seek the living among the dead? He is not here, but has risen!”

In his earthly life, Jesus proclaimed to those around him, “I came that they may have life, and have it abundantly” (John 10:10). Through his suffering, death, and resurrection, Christ made this possible by breaking the bonds of sin and death, opening for all who come to him in faith a new and spiritually abundant way of life. As the Apostle Paul later affirmed, “Just as Christ was raised from the dead by the glory of the Father, so we too might walk in newness of life” (Rom 6:4b).

Yet this gift was not meant for a small, select group. As the Risen Lord himself immediately made clear, this hope for a newness of life was to be shared with everyone: When he appeared to his disciples on the evening of Easter Day, he greeted them with the words, “Peace be with you. As the Father has sent me, so I send you” (John 20:21). Thus from the beginning, our Lord charged his Apostles to spread his message of repentance and divine forgiveness through the hope ignited in his Resurrection without anxiety or fear. It follows that, just as the Holy Fire that emerges each year from the Empty Tomb is shared with multitudes throughout the earth, so too are we called to be bold witnesses to the transforming grace of God in Christ Jesus to all of God’s people, both by word and deed.

This Christian witness is all the more pressing in the face of the lingering effects of the pandemic, the sudden eruption of violence and war, and the increase of injustice and oppression around the world. It is therefore essential that our Easter celebration be not merely the commemoration of a single, albeit epoch-changing day in history. It must also be for us a time to rededicate ourselves to Christ’s call to pass along the Holy Fire of God’s divine grace to those in need of hope, both far and near. Only in this way can we fully realize the deeper meaning of Christ’s Resurrection, as his transformative message of peace and reconciliation spreads to the four corners of the earth, beginning from Jerusalem.

This Easter, we call upon the faithful across the globe to hold all these things dear in their hearts and minds as we once again exchange with one another that joyous and ancient Christian greeting:
“Christ is Risen! (Al Maseeh Qam! Christos Anesti! Christos harjav i merelotz! Pikhirstof aftonf! Christ est Ressuscité! Cristo è risorto! Christus resurrexit! Meshiha qam! Christos t'ensah em' muhtan! Christus ist auferstanden!) He is Risen, indeed! Alleluia!”

—The Patriarchs and Heads of Churches in Jerusalem