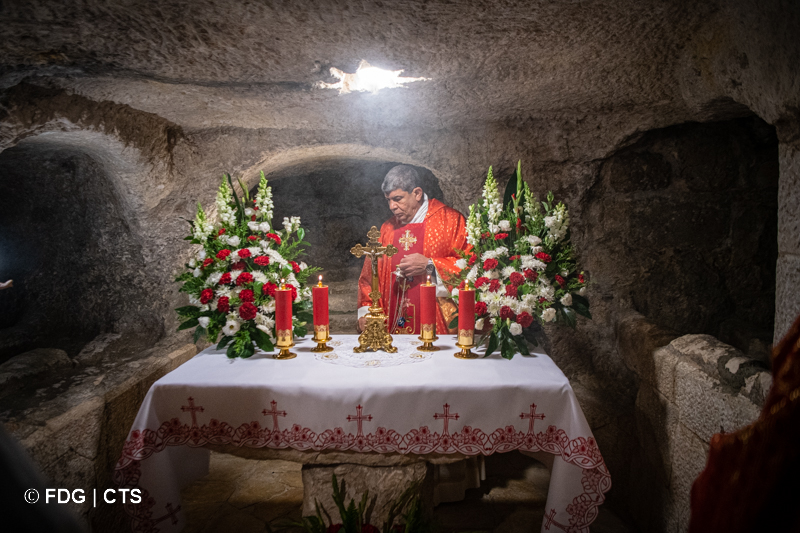 Fr. Ibrahim Faltas, Vicar of the Custody of the Holy Land, incenses the altar of the Grotto of the Holy Innocents

The Solemnity of the Holy Innocents was celebrated in Bethlehem on 28th December, presided by the Vicar of the Custody of the Holy Land, fr. Ibrahim Faltas, in the presence of the Franciscan community of Bethlehem, the local faithful and religious.

The narration of the Massacre of the Innocents is told in the Gospel according to Matthew (2,16), without parallels in the other canonical gospels: “When Herod realized that he had been deceived by the Magi, he became furious. He ordered the massacre of all the boys in Bethlehem and its vicinity two years old and under, in accordance with the time he had ascertained from the Magi.”  In relation with the events present in the book of Exodus, the evangelist presents Jesus as the new Moses: just as the latter escaped the violence of the Pharaoh, the Son of God escaped the massacre ordered by Herod thanks to an angel sent to Joseph in a dream, in which he was told to flee to Egypt. The Holy Family did not return to Judaea until after the death of Herod.

The day which venerates these innocents as martyrs, as they were torn from life shortly after Christ came into the world, already appears in the sources of the 6th century, but it was elevated to the rank of a proper feast-day by Pope Pius V,  who made it correspond to the other feast-days after Christmas in the Roman Breviary (1568) and in the Roman Missel (1570).

The Custody of the Holy Land commemorates this Biblical episode in the city of the massacre, in Bethlehem. A few yards from the grotto of the Nativity, a small grotto opens up, identified as a common grave where tradition places the tomb of the Holy Innocents and commemorates the massacre. Next to it, there is the grotto of St Joseph, where the angel is believed to have spoken in a dream to Joseph to order him to flee to Egypt: the mass was said here, on the altar of St Joseph.

During the homily, the Vicar of the Holy Land wanted to stress how “in the feast of the Holy Innocents, our thoughts go to the many wars present in today’s world, where  it is the children who pay the harshest consequences.” Fr. Faltas pronounced severe words against all the situations in which, due to the unconsciousness of men, we still witness the martyrdom of innocent children. “I want to recall the heart-breaking cries we all heard a few days ago for the death of two small children in Beit Sahour, two holy innocents, dead due to the lack of responsibility of men. Only the Lord can bring consolation to this family in our city; a massacre that took place just a few days after the feast of Christmas, just like the Massacre of the Innocents. All this requires a personal and social attitude and answer.”

The Vicar then continued with an invitation to follow the example of St Joseph, “who offers us a very clear testimony of the type of answer decided before the call of God. We feel we can identify in him when we have to make decisions at the difficult times of our faith: God “makes us come out of the night towards Egypt,” in other words, he invites us not to be afraid in the  face of our very lives which often appear to us as a dark night, difficult to light up.”

During the celebration, the traditional Christmas songs “Adeste Fideles” and “Tu scendi dalle stelle” kept alive the spirit of Christmas which has just passed, to remember here the birth of Jesus. The final wish of the words of fr. Faltas is that “the new, bright and strong light of God, who has become a child, fills our lives and strengthens our faith, our hope  and our charity.” 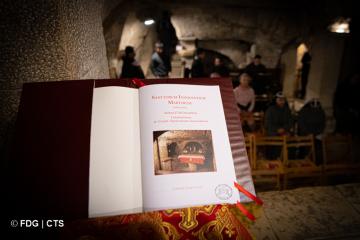 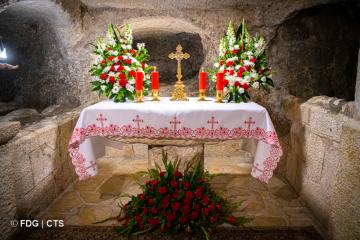 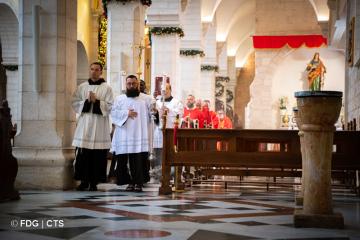 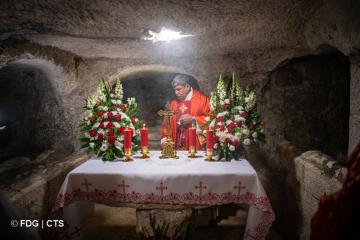 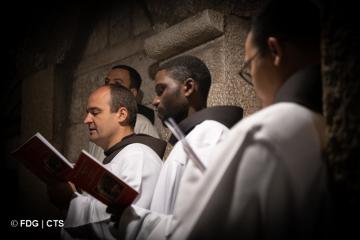 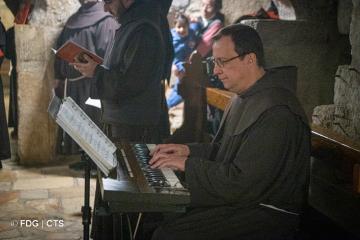 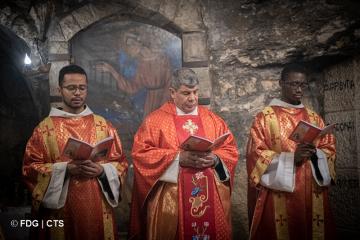 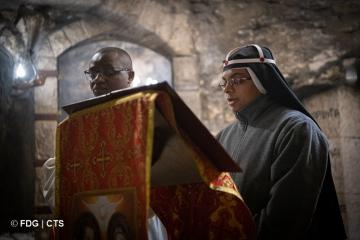 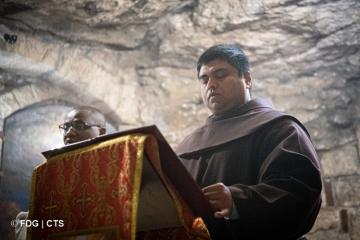 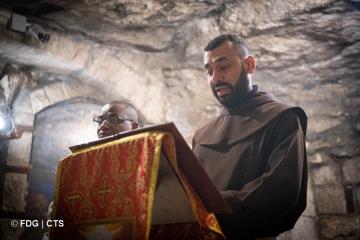 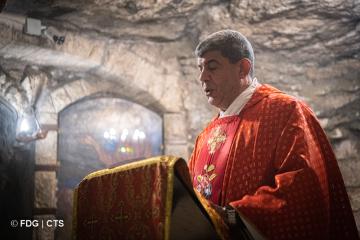 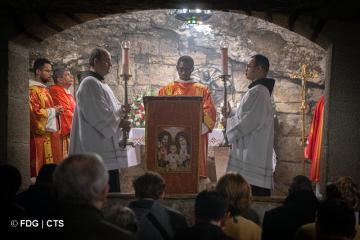 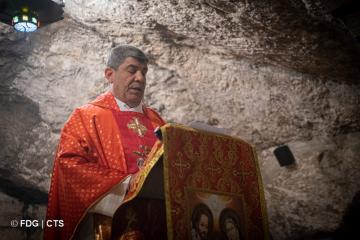 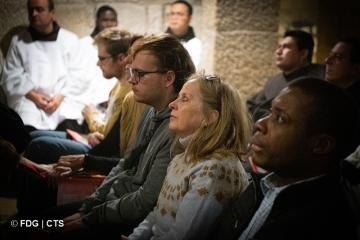 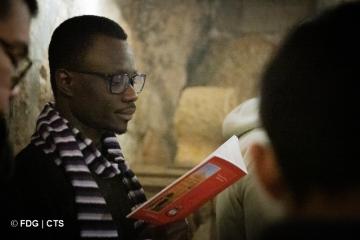 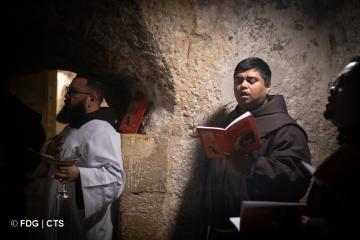 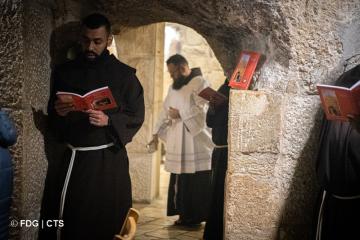 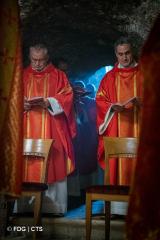 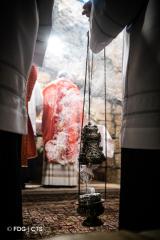 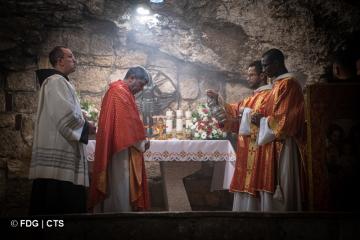 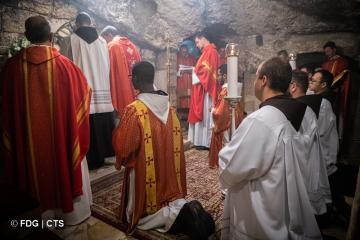 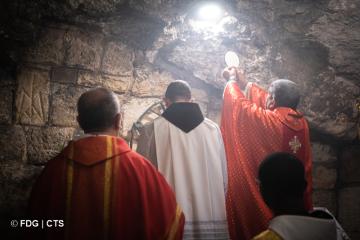 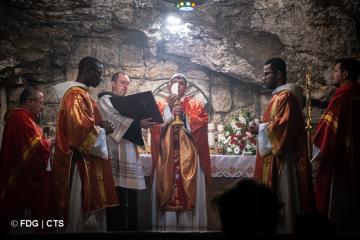 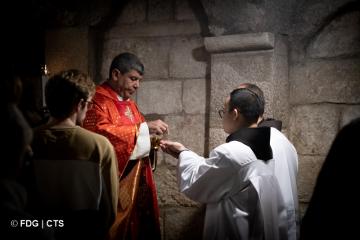 Christmas in Bethlehem, where it all started