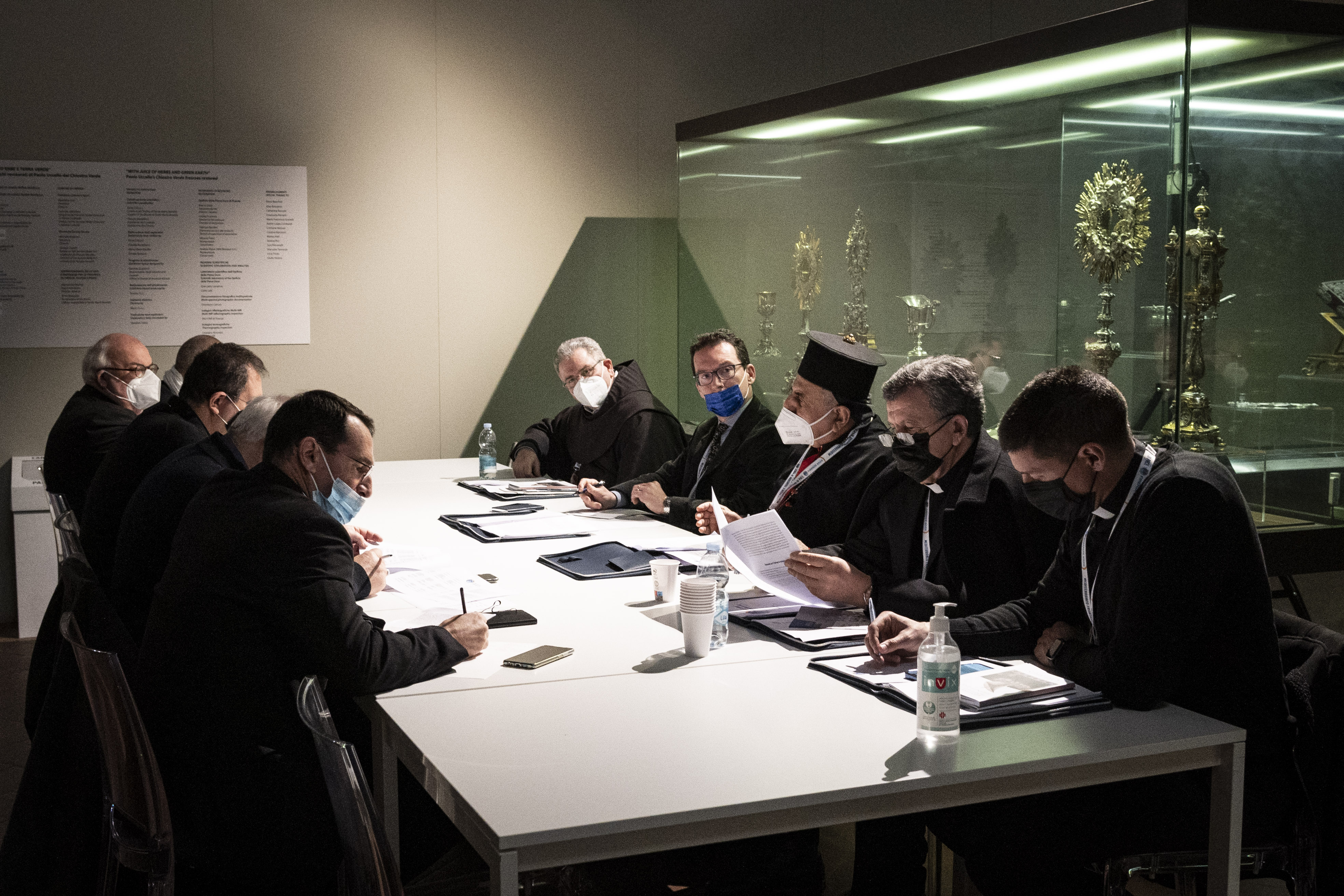 The meeting of the bishops and mayors of the Mediterranean, promoted by the Italian Bishops’ Conference, was held in the city of Florence (Italy) from 23 to 27 February 2022, upholding the aspiration ad the courage of Giorgio La Pira, mayor of Florence in the 1950s, who deeply cherished peace and the unity of peoples. The meeting, which follows the one held in Bari (Italy) two years ago, on the subject "The Mediterranean, a frontier of peace, "opened on the afternoon of 23 March with the prolusion of Cardinal Gualtiero Bassetti, archbishop of the diocese of Perugia-Cittàdella Pieveand President of the Italian Bishops’ Conference, with an address by the Italian Prime Minister,  Mario Draghi.

One new element which accompanied the meeting was the presence of 60 mayors, from different areas of the Mediterranean, who held a parallel assembly and who then met with the bishops. The days were intense, dedicated to discussion and dialogue, which allowed the bishops and the mayors to reach the writing and signature of the Florence Charter: a document passed by both assemblies with the aim of fostering peace and dialogue amongst the peoples of the Mediterranean. This document will then be given into the hands of Pope Francis.

Returning from the meeting, the Custos of the Holy Land, Fr. Francesco Patton offers an overview, with a focus on the need to speak about peace in this context where the Mediterranean still plays an active role for the destinies of the different peoples surrounding it.

An overview of the event: what were the main points and what was new in this meeting?

From the point of view of the ecclesiastical path, it is an important event because the participants are the bishops of cities around the Mediterranean Sea, from the European shores to the African ones, via the Middle East: the whole of the Mediterranean was present. This is very important because it offers, for example, the chance for bishops of the Oriental rite to make the current situation in their countries, after the terrible wars of the last decades that have decimated the oriental communities, especially in Iraq and Syria, but also in Lebanon. That’s not all: these events allow everyone to express themselves on situations which are profoundly different: the chance to listen to one another is very important, especially if linked to the need to make a culture of peace grow.

Again from this point of view, many of the mayors present had probably ever seen one another or met before, also because often they belong to countries that do not have diplomatic relations and this type of forum becomes the occasion for meetings which otherwise would be difficult.

How can the Mediterranean area be considered in the light of contemporary events?

Amongst ourselves, we have defined it a “crossroads of peace”. The Mediterranean is a sea which – as Pope Francis has denounced – has several times become a huge tomb, due to the problems linked to the attempts by immigrants to cross it to reach the European shores. The commitment of the Church aims to be the offer of a significant contribution to a culture of peace through, for example, educating on peace, in order to train young people who can make a substantial contribution and who have a clear Christian identity, to be able to know how to declare and propose the Church and be able to evangelize through testimony and announcement.

What does it mean to be able to speak about peace at a time of conflict like the one we are in?

I would say that precisely the situation experienced by many countries and the circumstance in which we found ourselves, the start of the aggression by Russia on Ukraine, has made us notice even more that there is the need for a different culture, for a culture of peace. Touching at close hand the devastation of war allows working out a rejection based on the experience of devastation itself, in harmony with the social doctrine of the Church which refuses war as possible instrument of solving conflicts, favouring dialogue, negotiation and diplomacy.

The Holy Land: amongst all the subjects of the meeting, in which aspects did you find the work that is done on a daily basis by the Custody of the Holy Land?

Personally, I find the work we do in many of the aspects we discussed: in particular in the need for dialogue between leaders and people of different religions. Then also in the central position of education and training, both from the Christian ecclesiastical point of view and from the civil point of view. The Custody has always put good education at the centre, which allows coexisting and overcoming stereotypes and prejudices over the years of growing up together. Another fundamental aspect is the need and the urgency to start a dialogue capable of building bridges between cultures and affinities, instead of remaining blocked by the existing walls, as well as the need for a Church that knows how to speak and evangelize through social commitment.

Trying to project ourselves into the future, how do you imagine this appointment in the years to come?

This time the bishops were all Catholics but it would be interesting to extend the invitation to other religions and confessions for a dialogue around these thematic nuclei, just as there were Christians, Muslims and Jews among the mayors. Having a discussion which is also extended, allows making a real contribution to peace because in real life we do not live in watertight compartments created by our religious affinity.

We hope that in two years’ time the Italian Bishops’ Conference will organize this meeting again. Beyond the final products, the documents that are signed and published, there is value in itself in dialogue and reciprocal listening because there are various sensitivities and reciprocal listening also leads to creating an ecclesiastical conscience where there is also room for different positions.

For me, more than being on the shore, in the future it will become important to be able to face the sea. My proposal for the future is to hold this meeting in Cyprus, for the symbolic value that Cyprus has: it is an island in the centre of the Mediterranean, which is at once and the same time Europe and the Middle East, through which a fracture runs. I would say that it is the synthesis of all the potential that the Mediterranean has, but also of all the limits and problems that it pulls behind it. I see it as a symbolic place.

Pope Francis himself, on his recent visit, realized how greatly Cyprus is a synthesis of everything that is happening in the Mediterranean. 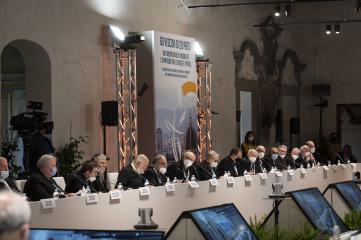 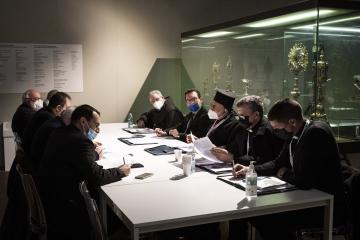 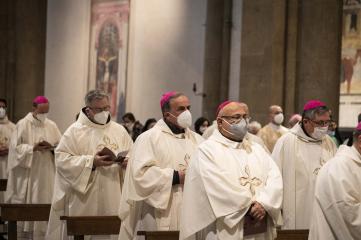 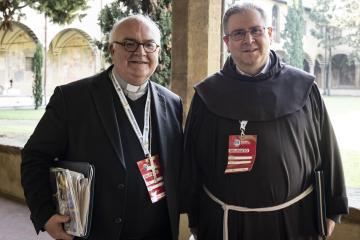 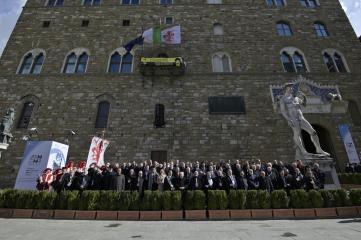