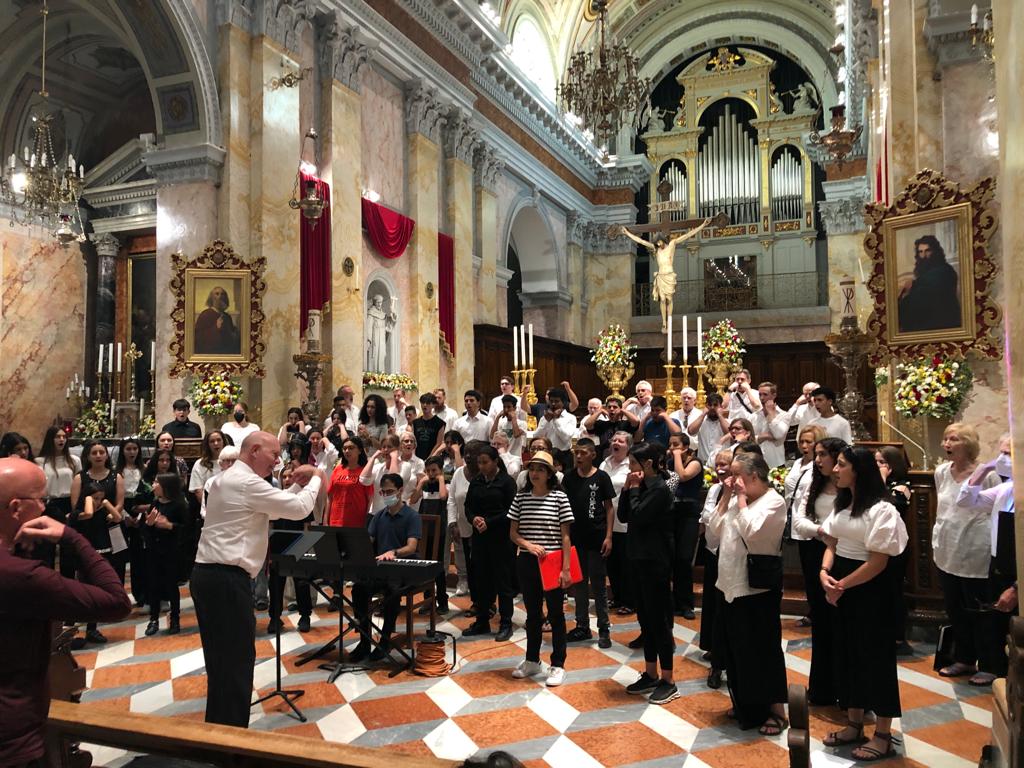 On Saturday 2 July, St Saviour’s Convent is in a state of excitement to welcome the Chapter of the friars of the Custody.The capitular hall is ready, the administrative office is being set up and a reverential silence falls over the corridors and courtyards. However, in the afternoon, the place begins to be filled with voices and laughter: a small miracle that features about eight people both adults and youngsters.

To mark the start of the Chapter, a concert was organized where three choirs performed together,uniting their voices and stories. One choir is made up of teenagers who study at the  Magnificat, theYasmeen Choir; the second is a choir of Palestinian children and teenagers from Bethlehem and Hebron, the Amwaj Choirand the third one is an American choir of youngsters and adults from the Presbyterian church of Pennsylvania, the Bryn Mawr Choir. This choir contacted the Magnificat over a year ago to find out how it could be possible to organize a concern during its journey-pilgrimage to the Holy Land. It was a long wait complicated by the frequent and always new rules on containment of the pandemic. The Magnificat students were unable to sing together for months on end and, although the restrictions have gradually been eased, it was not easy for them to find days for the rehearsals when they could all take part. The other obstacle for the project was obtaining permits for about fifty choir members from Bethlehem and Hebron, in order to hold the concert all together. In the end, however, the miracle came about: through the US Embassy, the young Palestinians were able to enter Jerusalem, some of them for the first time ever. In the early afternoon of Saturday 2 July. After months of preparations and exchanges of ideas by email and video calls, the three choirs met for the first time with great joy and excitement.

The church became a rehearsal room, while the parish hall was turned into a space where the choir members could get to know one another and relax before the concert, scheduled for 6.00 p.m.. Eighty singers united their voices in songs in Arabic, English and Spanish, creating melodies that warmed hearts and rekindled hope.The choir of Bethlehem and Hebron are used to taking part in musical events in Europe and other parts of the world, but they had never crossed the borders between Palestine and Israel  to be able to perform in Jerusalem. The accompanying pianist, who already collaborated remotely with the Magnificat, living in Bethlehem, was unable to contain his joy in telling us that for six years it had been impossible for him to reach the holy city of Jerusalem.

There was not enough time to listen to all the stories and various adventures of these young singers, who all have in common music and a passion for singing. It was not easy to end the concert and vacate the church for the prayer of vespers;there was so much energy that everyone would have preferred prolonging their time together, the harmony of the voices and choirs. In the courtyards, the smiles multiplied, as did the hugs and exchanges of greetings before the final farewell. The concert was a real success, both from the artistic point of view and. Above all, from the human and spiritual one.Thanks to music, frontiers can be broken down, horizons broadened and, with patience and humility, a worthier world can be built. 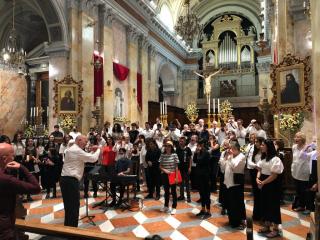 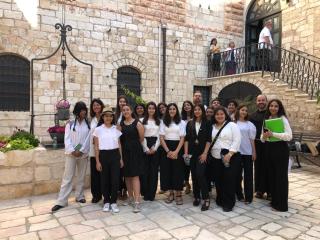 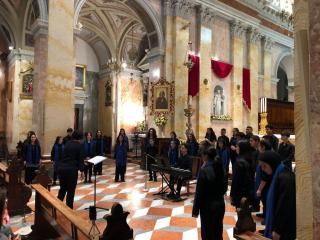 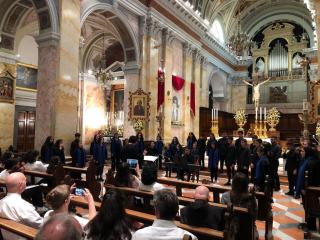 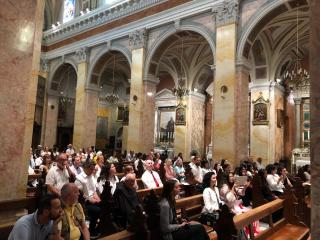 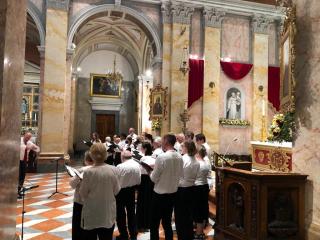 "Knüpfwerk": the students from the Magnificat Institute at the Austrian interreligious camp