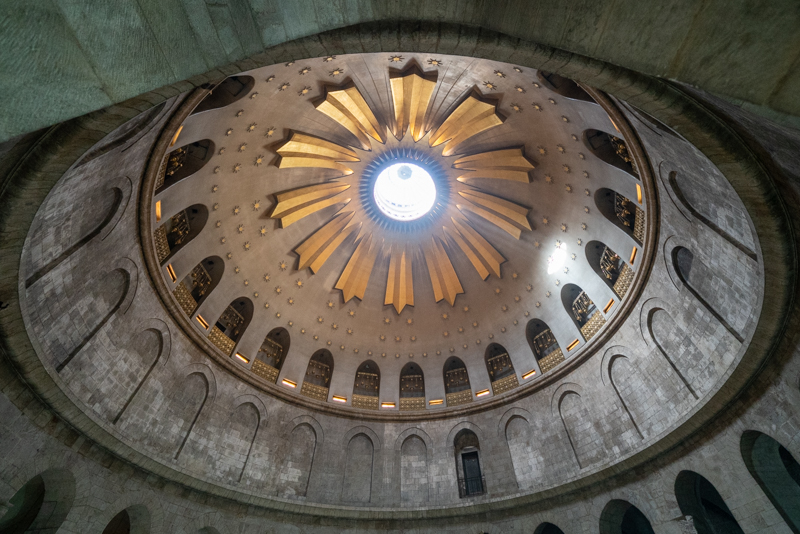 In the morning of Saturday 16 April, the Vigil considered the “mother of all the holy vigils,” that of the Resurrection of the Lord, was celebrated in the Basilica of the Holy Sepulchre in Jerusalem. The solemn mass in the Anastasis of the Holy Sepulchre was presided by the Patriarch of the Latins, His Beatitude Mons. Pierbattista Pizzaballa, before a large number of faithful who came in the early hours of the day to follow the ceremony.

Celebrated in advance with respect to the rest of the world, where it takes place in the night between Saturday and Sunday,  the celebration in the Holy Sepulchre is linked to a very old legacy. Dating back to before the Second Vatican Council, and kept here for needs related to the Status Quo which regulates the life of the Christian communities in the church of the Holy Sepulchre.

This special vigil consisted of a number of moments: the liturgy of the light, characterized by the  Lucernarium rite, where the Paschal candle which symbolizes the light of Christ Risen in glory, is lit; the liturgy of the Word, in which the assembly meditates on the marvels accomplished by God for his people, through reading seven passages from the Old Testament, a letter from Paul and, lastly, the Gospel which narrates the women’s discovery of the empty tomb; the baptismal liturgy, consisting of the renewal of the promises of the Baptism, through renouncing Satan and the profession of faith; the Eucharistic liturgy, where the members, just regenerated in baptism, take part in the table prepared by the Lord through his death and resurrection.

In his commentary on the gospel according to Luke, the Patriarch Pizzaballa dwelled at length on the courage of the women who follow Jesus during his ministry and who were physically present “not only during the passion and the crucifixion, but up to the very time of his burial." These women, that the evangelist mentions by name, Mary Magdalene, Joanna and Mary the mother of James, arereal people “with a name and a mission." These women, without whose courage it would not have been possible to start the dynamism of the announcement of the resurrection; without them, "the disciples would have remained locked behind their fears" inside the Cenacle. This is a place “which the Church must leave to seek Christ risen, to venture out and try to understand the hidden meaning of the signs of the presence of Christ in the world.”

The archbishop then asked whether we are also tempted, as the disciples were, to seek Jesus among the dead - “Why do you seek the living one amongst the dead? (Luke 24, 5) -,whether we too are tempted to beg him  “to put an end to the culture of death and destruction, hatred and wars,” in front of which the joy of Easter seems very far. “Yet,” the archbishop said forcefully, “Christ is the Living God” that represents “a reality we can touch” as he is “present and operating in the world, where the living  and ecclesiastical faith of the disciples welcomes him.”

With a clear reference to the story of Luke on the disciples locked up  in the Cenacle before the women’s announcement, the preacher exhorted the faithful to see hope in Christ: “Christ is the hope of those who do not stay closed in their security, but venture out to find him in this difficult world.” And then he concluded: “let us be amazed by the surprises that God has in store for us [...] let us walk the first together, like the women on the morning of Easter Sunday, and let’s be the first to go and give the good news of the hope in the Resurrection!”

To conclude the celebration, the Patriarch took leave of those present with the solemn blessing, announcing the Easter of God that in his Son he renewed the whole of humanity. 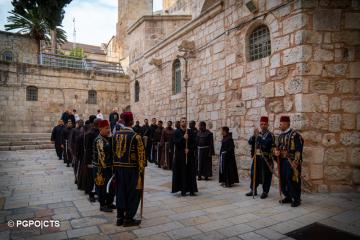 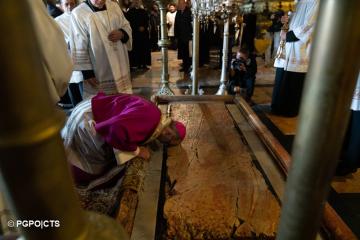 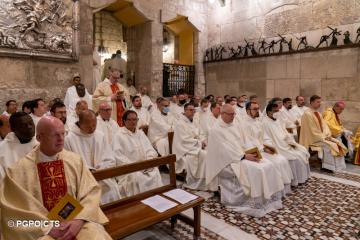 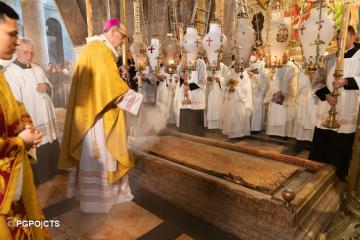 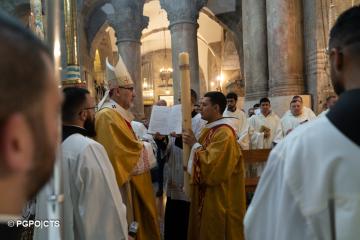 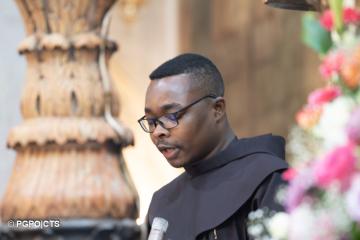 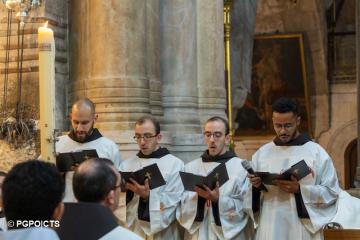 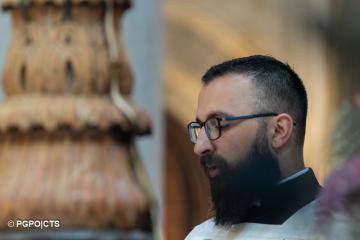 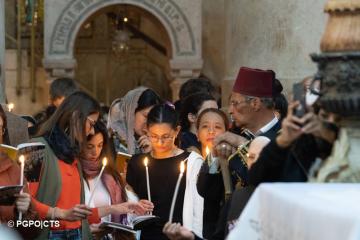 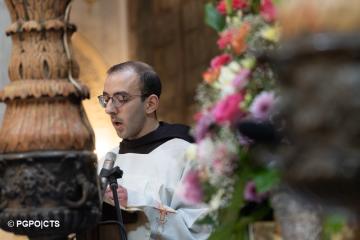 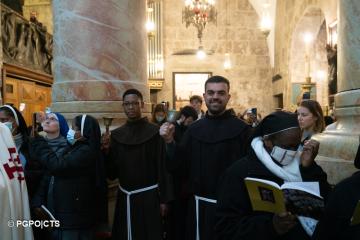 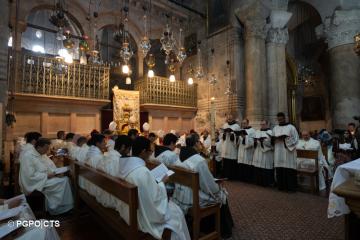 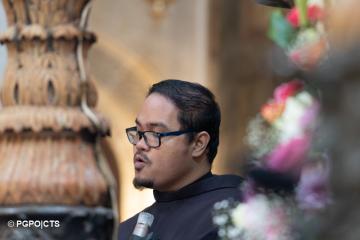 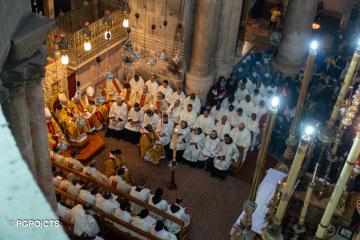 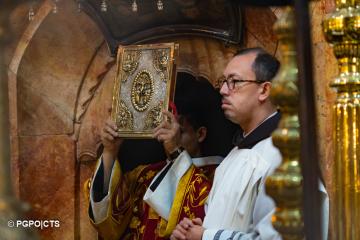 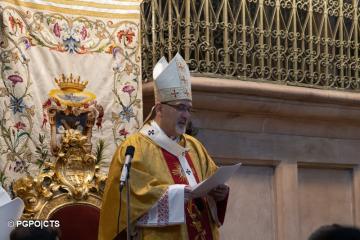 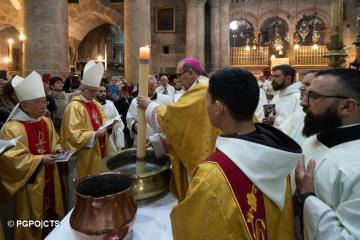 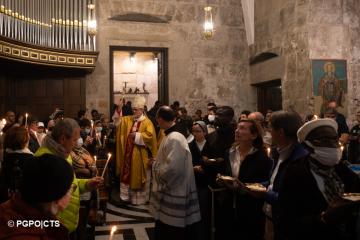 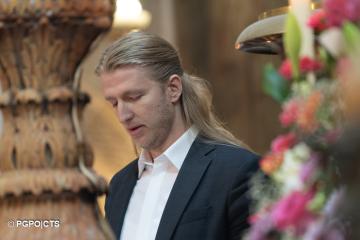 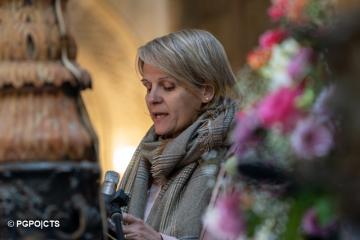 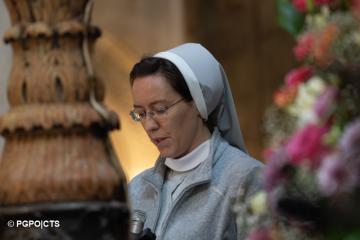 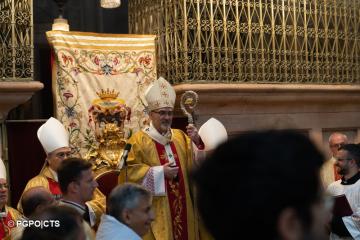