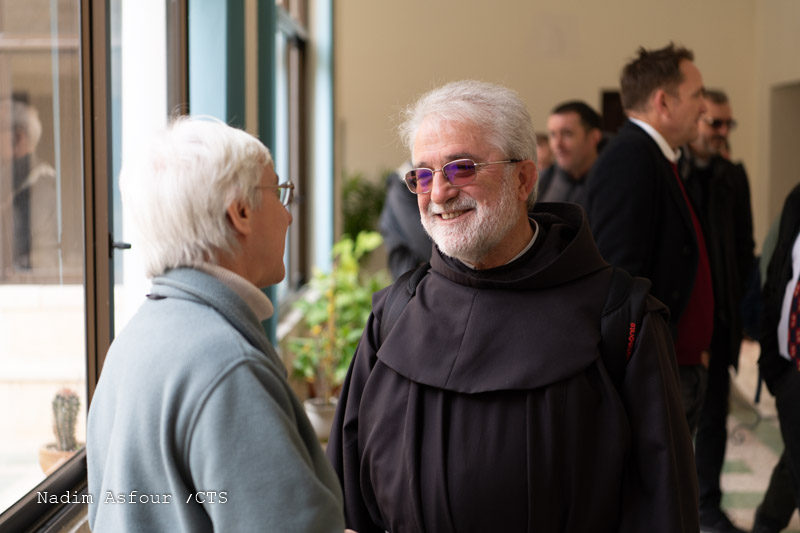 Mons. Rodolfo Cetoloni, Bishop of the Diocese of Grosseto (Italy), was ordained a priest in Jerusalem on 26 June 1973. With a formation as a Franciscan friar minor, the bishop had arrived in the Holy City two years earlier to complete his studies in theology. This was the start of his very strong bond with the Holy Land, which still continues today, almost fifty years later. He has been a guide for pilgrims, has encouraged pilgrimages in his diocese and  twinning initiatives with the Holy Land, even joining the Board of Directors of the John Paul II Foundation, which carries on projects in the Middle East. For the third year running, he has been chosen to represent the Italian Bishops’ Conference to take part in the visit by the Holy Land Coordination, the delegation of European bishops in the Holy Land from 11 to 16th January 2020. On this occasion, he wanted to tell us how his commitment for the Land of Jesus started.

How did your bond with the Holy Land begin?
I arrived in the Holy Land for the first time in 1971. I decided to go out of curiosity and a desire to travel around the world. One of my companions of the novitiate, in formation in the Holy Land, wrote to me and this made me want to leave like him. In Jerusalem I lived in the Convent of the Custody of the Holy Land at St Saviour and I studied in the Convent of the Flagellation. This very complex world which, despite the contrasts, coexisted, made me realize – and I understood it only later on – that the world should not be a single one in its expressions. People can live together and get to know one another. This way I came into contact with the Jewish world and the Arab world and the different Christian confessions.

What was your period of formation at the Custody of the Holy Land like?
The international nature of the Custody of the Holy Land was a great change for me. There were about twenty-five of us, all students from different countries. It was also a decisive period for my choice of priesthood, I was consecrated on 26 June 1973. After the ordination, I decided to return to Italy, but one month later, I received a phone call from Father Michele Piccirillo. He asked me to guide a group from Milan in the Holy Land and that’s when I started with the pilgrimages. I believe they are fundamental, because they let us understand what the Holy Land is.  Thanks to the pilgrimages, I fell even more in love with the Holy Land.

What was your last experience of a pilgrimage?
It was my first pilgrimage  not as a guide, and it was a pilgrimage with the young people from my diocese from 29 December to 5 January 2020. It was led by Fr. Matteo Brena, Commissioner of the Holy Land of Tuscany, to whom I had spoken of the Holy Land for the first time. I took part with great satisfaction. There were thirty-seven youngsters and I saw in them continuous attention and the readiness to accept the message.

How have you seen pilgrimages change in the past forty years?
First of all the number of pilgrims has increased and so has the number of people who take the courses for guides. The pilgrimage is often part of a pastoral programme and there is also a return of interest for the Bible, for communities. Another change that I have seen is the bond with the living stones, with the local Christians.
I personally experienced the Second Intifadah in a very particular way: we, the dioceses of Tuscany, were the only ones to come as pilgrims. In 2002 and 2003, I carried on a campaign called “We were all born there.”  After the occupation of the Basilica I spoke to the Italian Bishops’ Conference and the diocese where I lived as a friar (Fiesole) was appointed to create occasions for pilgrimages and links with the Holy Land between groups, schools and local parishes. I travelled often and if a diocese of Italy were willing, we looked for ways to create bonds. These were meetings in the communities, life in the families, support for some needs, from churches in Haifa to renovate to distance adoptions. The initiatives went from Haifa to Bethlehem, to Jericho and parishes in upper Galilee.
The Italian Church is a sister and mother Church of the Holy Land.

You are in the Holy Land at the moment for the Holy Land Coordination.
Yes, I represent the Italian Bishops’ Conference. It is the third time that I have taken part. The aspect that we are looking into this year is linked to education with visits to Gaza, Bethany and Ramallah. It seems very interesting also in the light of the speech on 9 January by the Pope to the diplomatic corps, in which he insisted a great deal on breaking down the curtain of silence on some situations such as Syria. We have to sow hope with realism and courage and the adults have to give a message to young people for dialogue and solidarity. The contact of the Custody of the Holy Land and the Latin Patriarchate in this context is important because in this lethargy of mistrust, we have to sow hope in young people.

What can the Church do for the people of the Holy Land?
The Church already does a lot. It is important, though, not only to do good, but provoke a critical vision of the situations, a commitment of people to be well formed. The Patriarch Emeritus Michel Sabbah spoke of the vocation of the people here, to stay in this land, to be witnesses. They need formation and a Christianity that is not “ethnic”, of belonging, but a Christianity of faith.

Which place in the Holy Land is dearest to you?
Of the shrines, the Basilica of the Annunciation in Nazareth. Of all the rest, the desert.
The desert is the fundamental place where the experience of the faith is formed. Silence, being in contact with God without defences,  the solitude but at the same time the need to find someone with whom to walk to avoid getting lost. I always try to give the pilgrims three quarters of an hour of silence to pray, scattered in the desert, and it is important for them.
Nazareth, on the other hand, is from my personal experience the place where you are frightened to say yes and then you say yes in a very normal life, made up of useless everyday things for thirty years. This is what the Lord has chosen.
When I learned that I had been appointed bishop, I was about to leave on a pilgrimage for the Holy Land and I was thinking of a motto to choose as bishop. One day I was in Nazareth and under the altar of the church I read the words Verbum Caro Hic Factus Est. I decided that my motto would be Verbum Caro: the son of God chose flesh and even flesh “in bad shape” like mine. 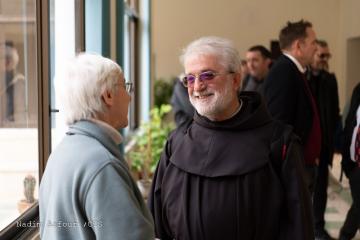 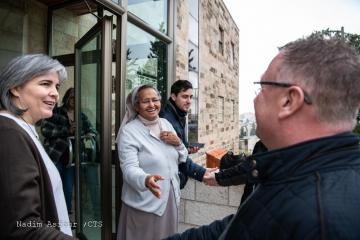 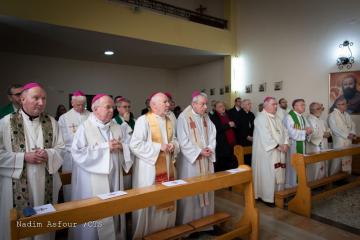 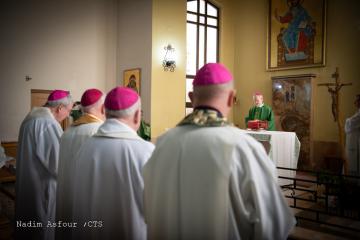 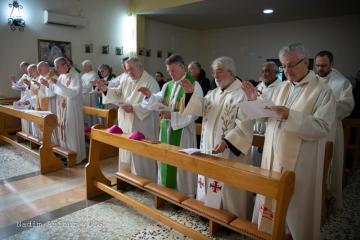 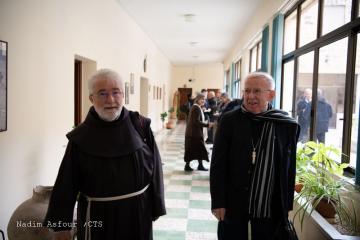