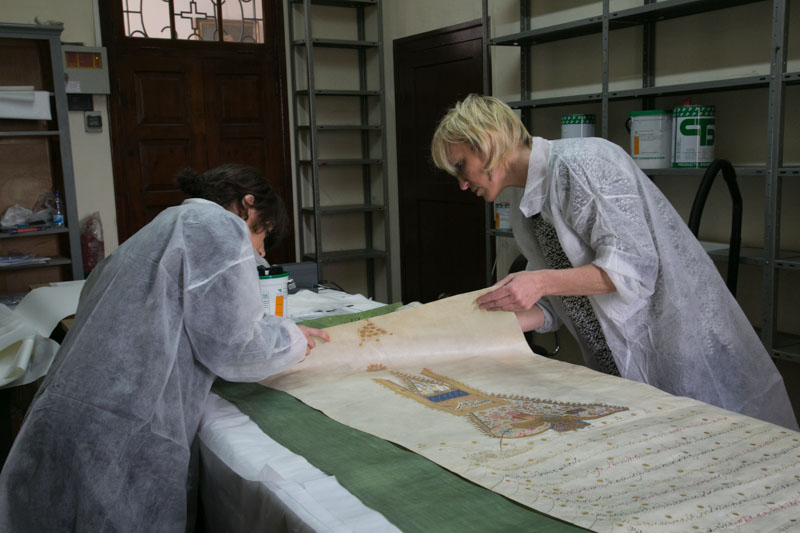 While the work on the Terrasancta Museum is under way in the places that will host it, Br. Sergey Loktionov, the Custody’s archivist, has been preparing the archival documents that will be on exhibit.

It is impossible to trace the history of the Christian presence in Jerusalem without exhibiting some firmans. The term firman etymologically comes from Persian (farman). It can mean “order,” “authority,” “will,” “desire” or “authorization.” Over time, the word "farman" then referred to writing, such as the document by which an order was given. Initially, the term was used for any type of document. Only during a later period did it become a part of administrative language.

The archive of the Firmans of the Custody is exceptionally rich in its number —“2644 firmans ranging from July 31, 1247, to May 5, 1902 are cataloged, and others will be added shortly. A team will come this summer to continue taking the inventory,” said Br. Sergey “And [it is rich] because of how well the firmans have been preserved, but also because certain works, in addition to being legal documents that are still enforced, are truly works of art.”

This is one of the finest pieces from the Franciscans’ collection to be presented at the museum. It belongs to the “gold” collection; the firmans are considered golden since they are illuminated with gold leaf. But, such a document cannot be exposed without special precautions. In fact, not one, but three or four firmans, will be displayed one by one, according to the particular limits of their conservation. And they will be held in a very specific frame, called “teca” in Italian, that now contains these parts. It is airtight, and its metal structure is anti-corrosive; it also ensures moisture stability in spite of external conditions.

Before putting the ”365 (i)” firman (its reference number in the catalog) under glass, it had to be restored. “This firman talks about some rights granted to the Franciscans at the Holy Sepulcher. Having been manipulated over the centuries, it is very fragile now. We found stains here and there, as well as tears on both the paper and on the fabric on which it is stuck. And add on top of that that it has been put away by rolling it because of its size (167 cm x 66 cm), and since it has been rolled and unrolled multiple times, it really needs to be worked on.” continued Br. Sergey. We must also note that the document dates back to 1755. It was issued by the Sublime Porte, the name used to designate the government of the Sultan of the Ottoman Empire.

So, Br. Sergey hired two restorers from the Consorzio Indaco (Brescia, Italy) laboratory, one of whom, Lancini Chiara, is a paper specialist, and the other of whom, Ilaria Mensi, is a fabric specialist. From April 9 to 21, they stayed in Jerusalem to work on various documents including the precious firmans.

In a room at Saint Savior’s Monastery, the firman is placed on a table, the paper on one side, the fabric on the other. It looks like an operating room, complete with scalpels, scissors, tweezers, white gloves and even a piece of bone. Chiara and Ilaria’s white lab coats add to the laboratory atmosphere.

Chiara hones her work on the edges of the paper. She has had to reconstitute the material, as pieces were missing here and there. In order to do this, she came to Jerusalem with papers of different weights in order to determine which one was closest to the original paper. In the end, her work cannot be seen by the naked eye unless the document is placed against the light because even the color of the added pieces were crafted to blend with that of the firman.

“And what if the hole were in the middle of the text? If part of the text were missing,” Chiara explained, “it is clear that we would be unable to replace it. With texts in Italian or Latin, Italian or Latin, we may sometimes replace the text, but not here because they are Arabic characters.” In reality, the text in question is written in Osmanli, which is basically Turkish written with Arabic characters.

As for Ilaria, she works on the fabric on which the paper was pasted. Ilaria and Chiara separated them from each other. This was a delicate operation because the paper’s weight is light and it was stuck on a very light fabric as well.

Moreover, in the report that they wrote, both restorers, properly explained how the firman’s deterioration is partly due to the way in which the two materials have reacted differently to the weather and conditions to which they were exposed, which have led them to be damaged.

Ilaria also arrived in Jerusalem with her material and with some fabrics. “I buy them from a French company.” The thread of the fabric should be as close as possible to the thread of the original. And Ilaria makes her own dyes in order to get the right shade. “The dyes also must meet specific criteria: they must be natural and contain no metals, so that they do not deteriorate the fiber of the veil or the paper that will be pasted to it once again.”

Her job is to repair the holes inside the fabric but mostly on the edges that have been damaged the most or that are frayed. By using a a thread counter and by pointing to different parts of the fabric, she asks others to verify her work. To the naked eye, in fact, it is difficult to find where she has made restoration changes. The fabric looks brand new, clean and ironed.

For both restorers, despite the accuracy of their work, what has made their work easier is the quality of materials that were used in past centuries. “Modern works deteriorate much faster,” said Chiara.

Both restorers being accustomed to working with works of art with their expert hands, they explain that their enthusiasm does not come from the age of the document that needs to be restored, but from its beauty. Ilaria used an interesting analogy. “The relationship that we have with the work and with the those who have commissioned its restoration is similar to that of the doctor with his patient and when the family asks about his condition and about his chances of getting better. We make a diagnosis and we implement a treatment plan.”

The family of the Custody, represented by Br. Sergey, is quite happy with the restoration work. Not only is the the firman in good condition, but it has been rejuvenated.
Now, what about the other 2,742? “We should clean all of the firmans,” said Br. Sergey. With a hand gesture, he makes it clear that the initiative would cost its weight in gold. “In the meantime, new precautionary measures are being taken for the whole collection. Indeed, the archives are increasingly popular with researchers and students. Some works will be placed under glass so as to be displayed during temporary exhibitions for example,” he continued.
We just completed in-depth restoration work on three firmans, but about a hundred of them would need the same care.”
This mission will require external financing in order to be brought to completion.