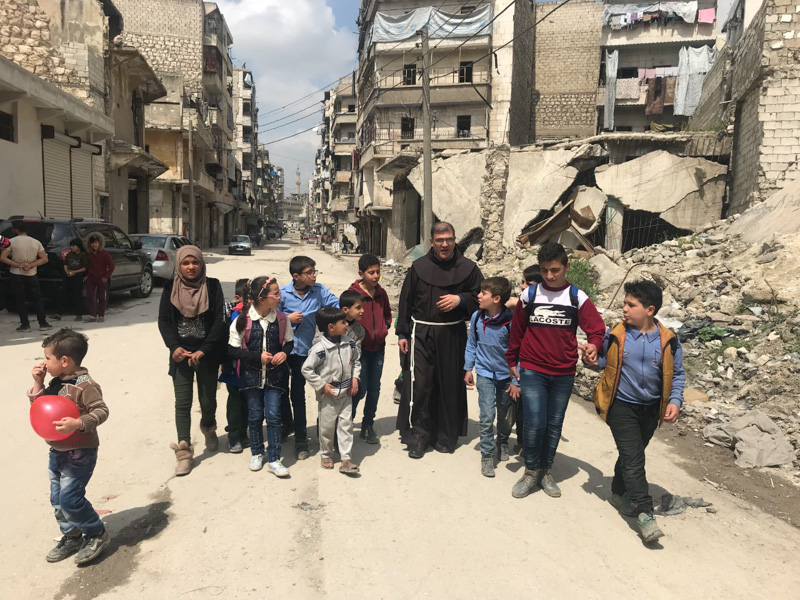 Orphans, children who have been abandoned by their families, children born after rapes and violence: the project "A name and a future", promoted by the Franciscan friars of the Custody of the Holy Land, in collaboration with the NGO Pro Terra Sancta, is for them, marginalized by society and amongst the weakest and most vulnerable. During the conflict, Aleppo was divided into two for years, until December 2016, when the city returned into the hands of the Syrian government. East Aleppo is still today one of the poorest and most dilapidated parts of the city and it is precisely there that the apostolic vicar of Aleppo Mons. George AbouKhazenand the Muftì of Aleppo, Mahmoud Akam, realized there was a major social emergency. “We realized that in East Aleppo, the poorest and most heavily affected part of the city, dominated by extremists, many children had been born that had never been accepted by society. The birth of many of them had not even been registered,” explained Fr. FirasLutfi, Minister of the St Paul Region, who has followed the project since the beginning. “This project is the result of the friendship between the Mufti and the Bishopof Aleppo, who launched the idea, and then on the operative side, a psychologist who had already collaborated on other projects in the past and I intervened.”

The first objective was to collect all those children who had never been registered and try and find a way to legalize their existence. “Then we realized that many of these children were disabled or retarded in their learning and that they had not gone to school for many years,” continued Fr. Lutfi. “So we started two different programmes to solve these needs. Psychological support is also important, because many children have witnessed horrible scenes, lost relatives or undergone traumas.”

Today it is mainly women and children who live in the eastern parts of Aleppo, as the fathers are dead, unknown or have fled. The project “A name and a future” aimed to reach women as well: “We have created a support project for women, because if the mothers are well, then the children will also benefit,” says the Minister of the St Paul Region. “This programme has many dimensions: the first is to give support through microcredit to women who are already able to work in some occupations. The second is to start training courses to learn an occupation. There is also a third area: schooling. Many women had been forced to marry early, even when minors, when they had not yet finished their education. The Jihadists had also prevented some from going to school and learning. Once freed, they wanted to go back to school.”

The Pro Terra Sancta Association has financed and promoted the project and looks after every aspect of it, up to the financial  reporting. “A name and a future” has allowed two centres to be opened, in small apartments in different areas, open from the morning to the evening. “We did not want it to be a large orphanage, because we did not want the children to lose their families or the relatives they lived with, although often they are the grandparents, uncles or acquaintances,” explained Fr. Firas. “So we organized programmes that are done during the day, thanks to the presence of a qualified staff, of about sixty people, and then the children go home in the evening.”

“This project was very important for us, both to help these children and to relaunch the dialogue, to say that we can live in a many-sided society,”  said the Bishop Mons. Abu, speaking in 2020 at “Windows on the Middle East”, a periodic online event organized by the Commissariat of the Holy Land of Northern Italy, in collaboration with the magazineTerrasanta.net. The bishop explained that the Mufti of Aleppo has given permission to Muslim couples to adopt children, which previously was not allowed. "Collaborating with them and for them, we have laid an important foundation stone for the future,” added the Bishop.

The celebrations of the eighth centenary of the meeting between St Francis and the Sultan in Damietta, in Egypt, also gave Fr. FirasLutfi the inspiration to reflect on the dialogue between Christianity and Islam: “What these two religions have in common is attention to the human being and human dignity. If we discuss only the dogmatic and theological side, we never reach anywhere in the dialogue, but when we work together for an objective that aims at promoting the human being, then there is a lot to talk about.”. It is precisely dialogue and encounter that change the world, according to the consecrated Franciscan.

“This war, despite all the atrocities and evil that it has caused, has offered new opportunities for meeting,” said Fr. FirasLutfi. “For example, I had never been to some parts of East Aleppo, but the war opened the doors for our presence as Franciscans even in those new places. And I went in my Franciscan habit, with my charisma which is service and respect for all creatures, as St Francis said. The charisma of Pope Francis also inspired us in this mission to go to the periphery of existence. We have to make the love of God felt where the most injured and marginalized person is,  as in the episode of the Good Samaritan. For me, those women and children, and those parts of the city are like that poor man of Jericho who was abandoned in the road half-dead  and with this project, we want to do something for them.” 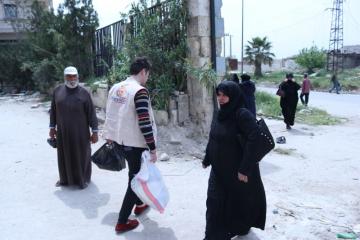 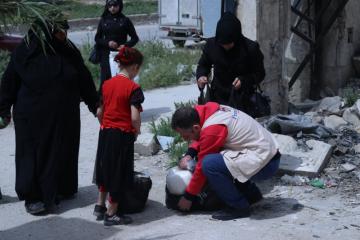 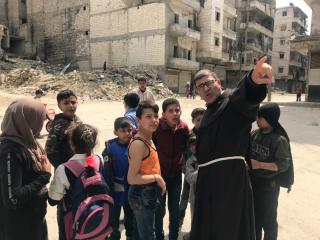 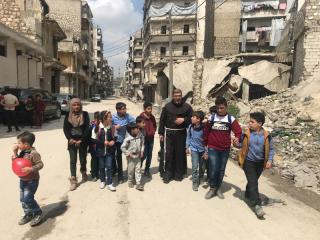 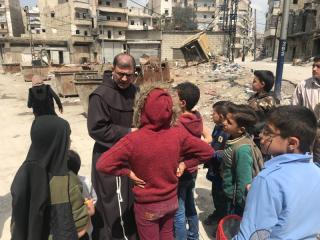 The challenge facing the Franciscans of Aleppo: “to rekindle the hope” of the Syrians

The Seventh Franciscan March in Syria