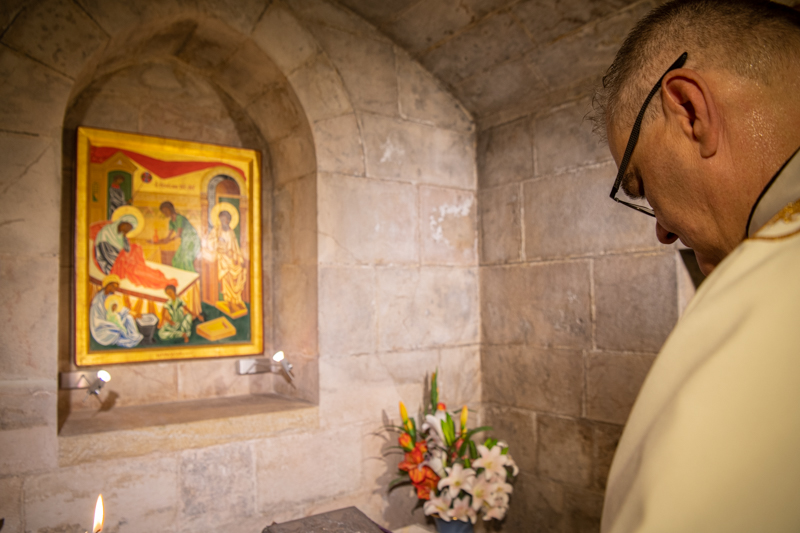 Only three birthdays are celebrated in the liturgical calendar of the Church: the Nativity of Our Lord, the Nativity of his precursor, John the Baptist, and the Nativity of His Mother. The Nativity of the Blessed Virgin Mary is important for its fundamental role in the history of salvation and it is commemorated every year on 8 September.

In Jerusalem, this important date is traditionally celebrated at the church of St Anne, through a eucharistic celebration. This occasion, as well as remembering the birth of the Mother of Jesus,also commemorates the historical closeness of France tot eh Custody of the Holy Land. The church of St Anne itself is the property of the French Republic, as it was a gift in 1856 to Napoleon III from the sultan Abdul Majid, as  sign of gratitude for the military support in the Crimean War. The name of the church, on the other hand, refers precisely to Mary’s mother, Anne, who lived here together with her husband St Joachim, as stated in the proto-Gospel of James, who emphasizes how the house of Mary’s parents stood “not far from the Temple.”It can be said that this site is doubly holy, as the place where the house of Mary’s parents stood and as  the place where the miracle of the healing of the paralysed man at the pool of Bethesda took place, an episode named in John 5, 1 and ff.

The church here, built in the times of the Crusaders, is one of the buildings that has remained intact over the centuries, thanks to King Saladin, who converted it into a Shafiite Koranic school.

Today, the Basilica has been entrusted by France to the Missionaries of Africa, a Society of apostolic life, made up of priests and lay brothers founded in October 1868 thanks to Cardinal Charles- Martial Alleman Lavigerie.

The eucharistic celebration in French was presided by Fr. Stephane Milovitch, ofm, friar of the Custody of the Holy Land, the ne superior of the Basilica of the Holy Sepulchre. French religious and faithful resident in Jerusalem and a French diplomatic delegation headed by the Consul General of France, René Troccaz, accompanied by the consular advisor for religious affairs, the Jesuit, Father Luc Pareydt.

The Gospel proclaimed during the mass was taken from the  first chapter of the Gospel according to Matthew who, as is known, quotes the genealogy of Jesus Christ going back in time, as far as the Patriarch Abraham.

"Why evoke Abraham today?” Fr. Stephane asked during his comment on the Gospel; "the exegetes continue to say that the evangelist Matthew, writing amongst the Jews and for the Jews, is trying to refer to the Old Testament and show that Jesus is a descendant of David. Abraham prepares and announces the vocation of Jesus of Nazareth, as well as ours, that of those who are summoned to collaborate on this work throughout the history of humanity. It shows us in the first place that it is God that always has the initiative and that he is expecting an answer from us. To give thebirth of Mary its full dimension, we have to consider it as prepared prophetically and really prefigured by the birth and the story of Abraham."

The celebration came to an end with the ritual procession at the crypt of the nativity below the Basilica where, accompanied by the Litany of Loreto sung in Latin, Fr. Stephane incensed the icon of the Virgin Mary. 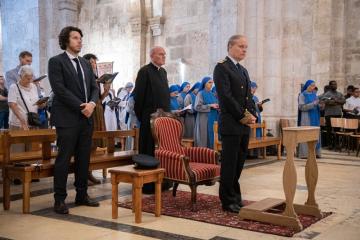 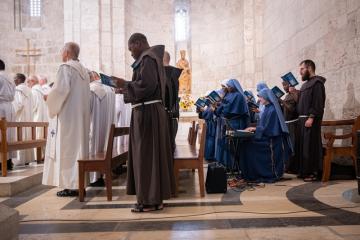 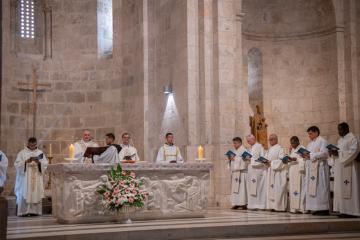 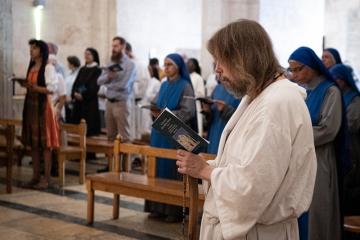 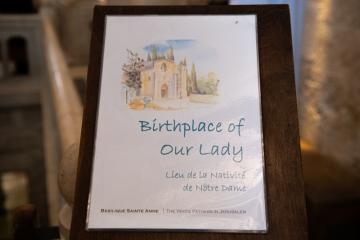 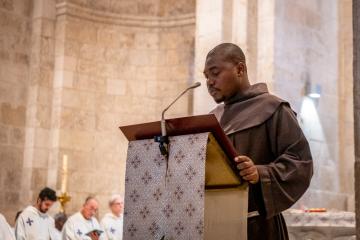 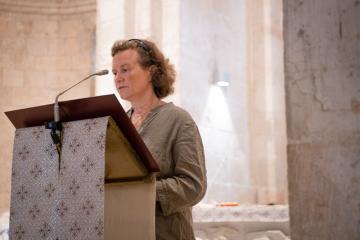 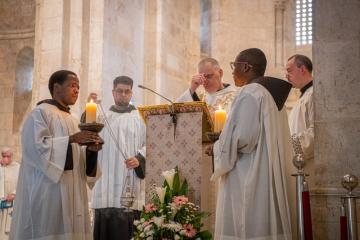 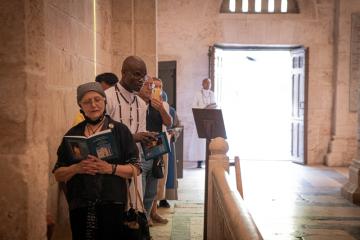 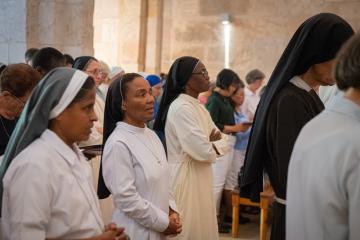 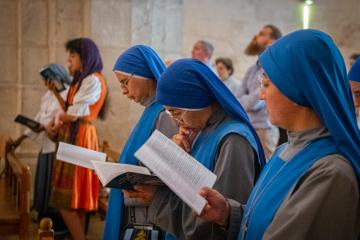 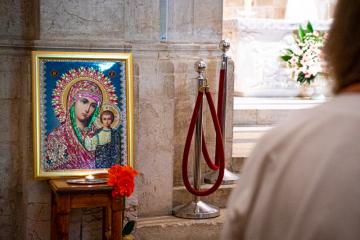 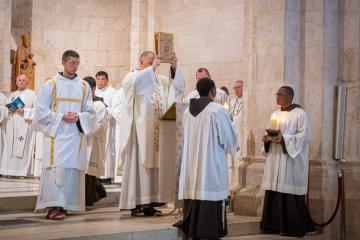 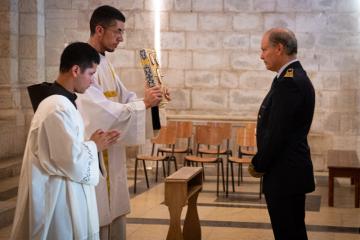 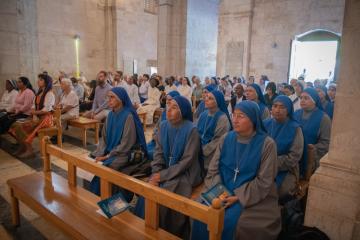 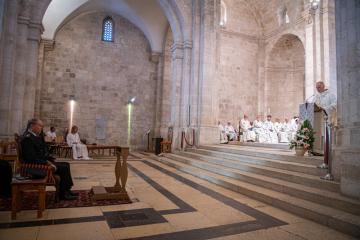 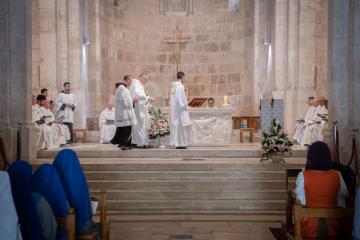 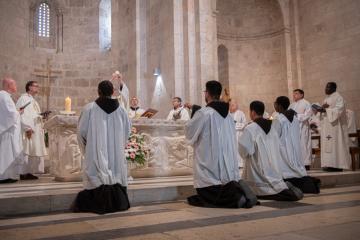 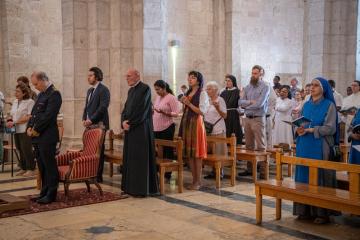 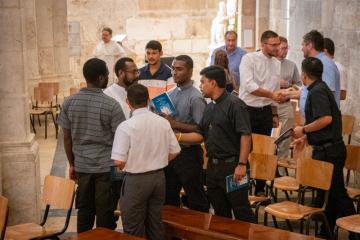 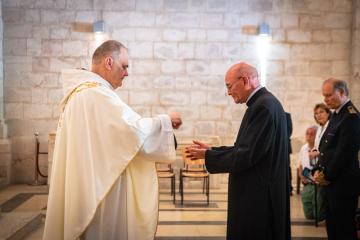 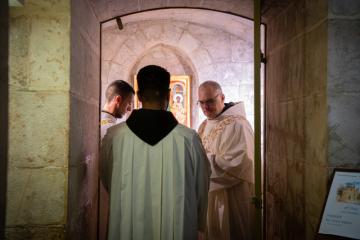 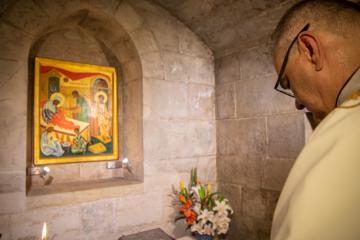