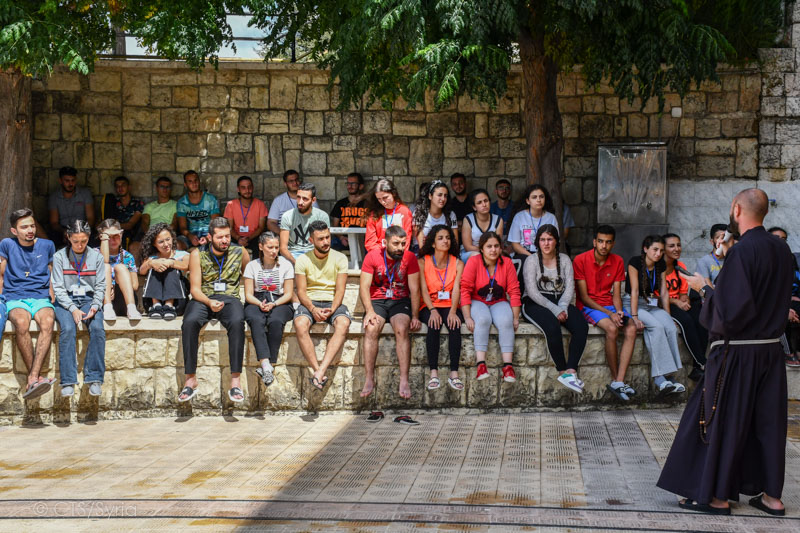 Br SAMHAR ISAAC, ofm
Responsible for the Franciscan March and vocation ministry in Syria
"It's the seventh Franciscan march. This year is special because it returns after 11 years of interruption due to the war and crisis in Syria. The last edition of the march, in fact, was in 2010."

ABDALLAH IBRAHIM
Participant in the seventh Franciscan March in Syria
"I encourage every young person, man or woman, to have this experience, especially those who don't know themselves or their mission in life so they can discover it on this march."

Thanks be to God who always leads to victory. Like the poor we have nothing but we have "enriched" many people. Despite the darkness and anguish, war, fear and death that destroyed the most beautiful years of life, that tried to extinguish the light and spirit of youth and that led to despair in hearts and weakening of faith, the Syrian Franciscan youth returned to their path, broke through the darkness and saw the light.

This seventh edition of the march, with the title " On the Way of Francis", started from "Autan", passing through "Barshin" and "Kafroun", up to "Bakto". 103 young men and women joined the Franciscan friars with fraternal love to live the faith, joy, simplicity of the Gospel and Franciscan spirituality. Coming from all the parishes and cities of Syria, they united in their love for life, for the Church and for brotherhood. For these young people it was a journey through the streets in the heart of Syria, but also an inner journey into the depths of their humanity and their faith, to establish a deep bond with God, in the love of His Son and in the power of His Holy Spirit.

MERA MOUSA
Participant in the seventh Franciscan March in Syria
"I took part in the march full of enthusiasm and confident that it would be beautiful despite the fatigue. I wanted to experience how to live the spirituality of St. Francis: we lived chastity, poverty and obedience, we lived love and inner peace; I had more than wonderful moments with people who became part of my family. A beautiful experience. My relationship with God was strengthened, I learned to be detached and give up most of the things I needed in my life, and now I don't need them anymore!"

A small Church full of life, strength, hope and love in God, who tried not to be affected by the lack of electricity, water, food, the looseness from the outside world, cell phones, internet, as well as the rain, cold and debilitating economic situation. They challenged themselves and circumstances to reach the goal they set out for.

FADI SABA
Volunteer at the seventh Franciscan March in Syria
"I joined because this experience is beyond wonderful, and it pushed us towards Christ. The experience we gained during this march is very Christian and taught us how sometimes we live with doubt about the existence of God or other things about God, but thanks to the march we were reminded that God is always present and with us."

They became brothers in the love of Christ and the joy of St. Francis, united in one heart, one faith and one prayer with their brothers and their guides, the friars of St. Francis. Coming from all countries they have overcome borders, circumstances and time to offer all their love, experience, support and good example to their young brothers in the Church who are the future, energy and joy in the face of wars and evil.

MARCELLE KAADI
Participant in the seventh Franciscan March in Syria
"I participated in this march because each of us needs to have good and difficult experiences, to test ourselves. I had so many good experiences with so many people and met so many people from other provinces. I learned new prayers and got closer to Jesus. In fact, we took advantage of everything we did, the themes or the prayers or even the way we walked. Although sometimes many people said they couldn't do it anymore, in the end there was something stronger than us that gave us strength: Jesus, who was always with us."

This march also helped many find their vocation. Some of them felt called to be fathers or mothers, others to be monks or nuns, but all called to be supportive and good servants of the Church.

Br SAMHAR ISAAC, ofm
Responsible for the Franciscan March and vocation ministry in Syria
"Certainly, the goal of this march was to live in the footsteps of St. Francis of Assisi and his spirituality. Through this journey, loading up with bags, these young people were able to live or understand what St. Francis experienced in Italy. During this march, we contemplated the beauty of the nature of our country.
At the same time, we visited churches that were new to us, and we prayed for the people who welcomed us in the monasteries and villages we passed through, as St. Francis did. "Peace and Good" was the greeting he used wherever he passed or whatever person he met: our greetings have always been "Peace and Good" as well.

God's powerful, beautiful, tender hand and great care made this march possible, as did the intercession of the Virgin Mary, our Lady of the Immaculate Conception, who protected this march and embraced everyone with her motherhood and mantle. 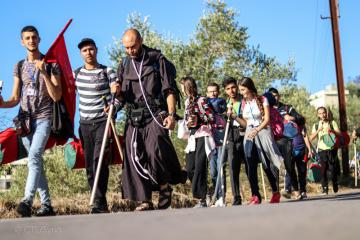 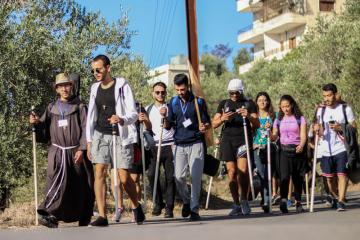 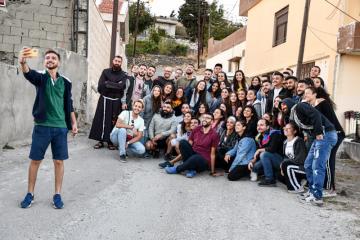 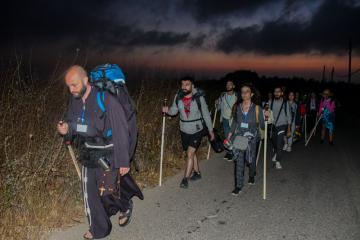 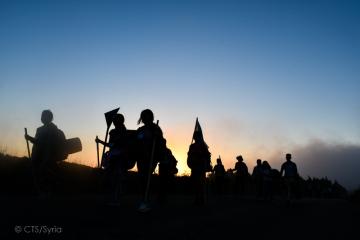 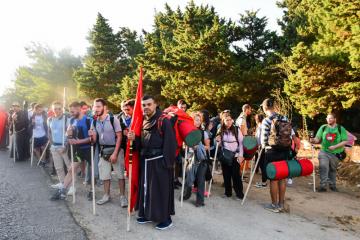 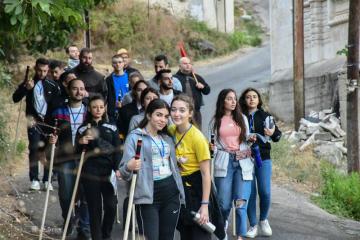 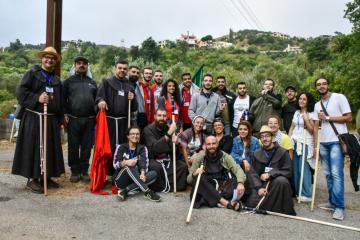 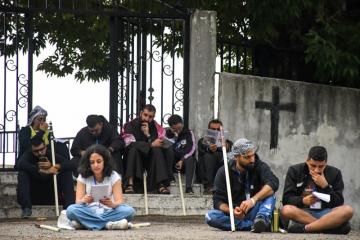 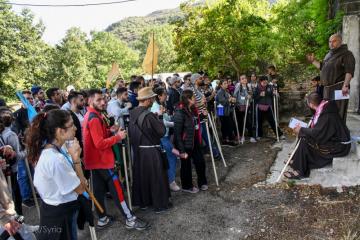 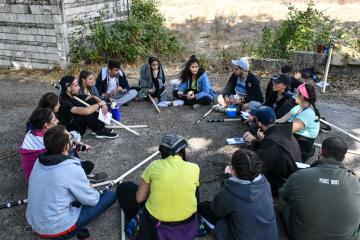 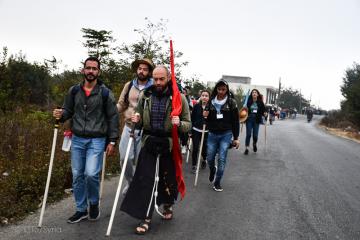 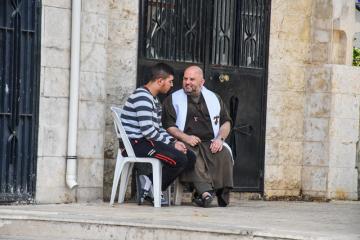 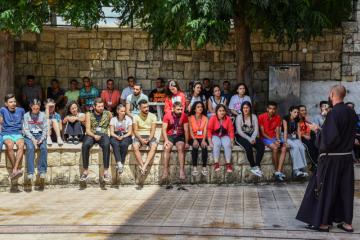 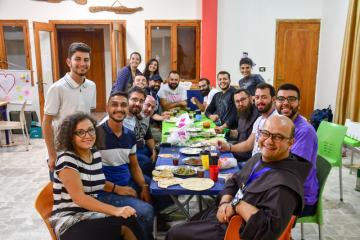 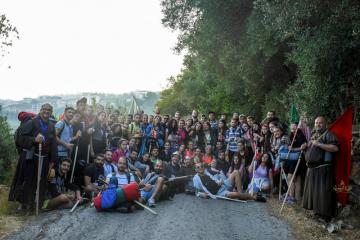 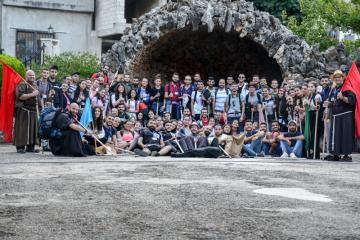 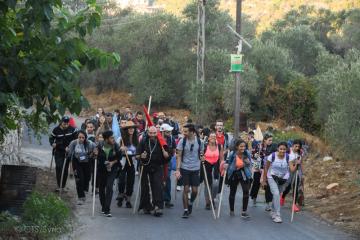 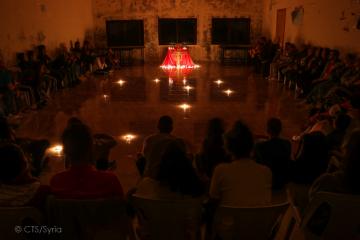 The challenge facing the Franciscans of Aleppo: “to rekindle the hope” of the Syrians

"A name and a future” for the children of Aleppo, the victims of war