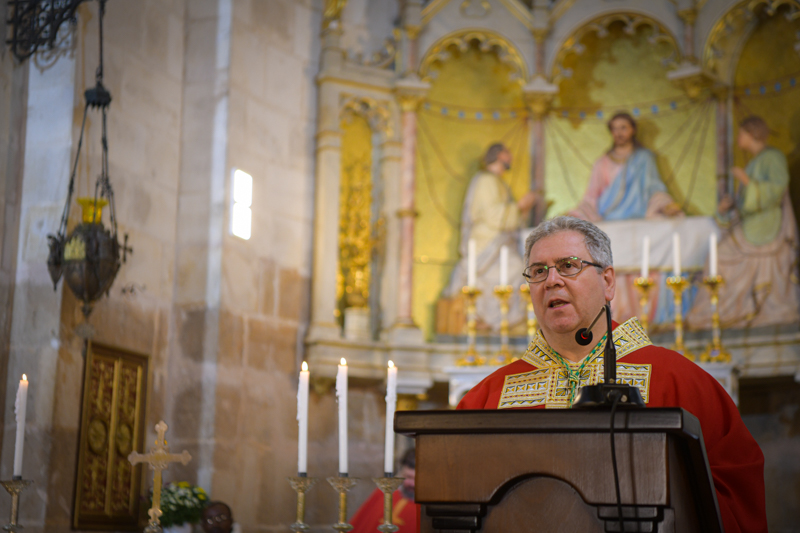 On Sunday 25 September, in the Shrine of Emmaus Al-Qubeibeh, Fr. Francesco Patton, Custos of the Holy Land, presided, as tradition has it, the mass in honour of St Cleophas and St Simeon, the two disciples who, on their way to Emmaus, met Jesus after the resurrection.

The celebration was attended by many Franciscans, religious and the few local Christians of Emmaus, the population of which is mostly made up of Muslims.

The Shrine, called of the Manifestation of the Lord, is in the village of Al-Qubeibeh, which comes from the Arabic term “Qube”, meaning dome. In the past, the village was made up of small domes. Here the meeting between Jesus and the two disciples who recognized him in breaking bread is commemorated: together with Abu Gosh and Nicopolis, Al-Qubeibeh is one of the three sites to which this memory is attributed, but the only one where the Franciscan Custody is present. It was purchased in 1861 by the Marchioness and servant of God Pauline de Nicolay and donated to the Custody of the Holy Land. Since then, the different excavations carried out have led to the discovery of the remains of the Crusader basilica founded on the “house of Cleopas in line with the coordinates that are given to us by Luke’s Gospel (24, 13-35).

In his comment on the readings, the Custos of the Holy Land, Fr. Francesco Patton, invited the faithful to recognize the close parallel which there is between the people of God and the disciples of Emmaus: “We too, like Simeon and Cleophas, in reading the present situation, understand the same sense of failure and frustration. We live in a land which ought to convey peace and hope to the whole world and yet it is still prey to a conflict that seems without a solution. We are surrounded by countries devastated by endemic wars that have lasted decades, by the economic crisis, by so many social evils and by new conflicts.”

“Like Simeon and Cleophas,” Fr. Patton continued, “we have to let Jesus illuminate our situation with his word and with the words of the Scriptures, to let us go from the sterile lamentation to taking on a new interpretation which is the Paschal one. The two of Emmaus do not recognize Jesus as he walks with them, neither from his appearance nor his voice: for them rising again is unthinkable. The words of Jesus, including the reprimands and above all the explanation of the Paschal meaning of all the scriptures, prepared them for the recognition, which is sparked off thanks to a gesture: that of breaking bread.” Breaking bread in the episode of Emmaus forcefully emphasizes the eucharist as the fulcrum of the Christian experience, but also the importance of recognizing Jesus in every concrete gesture of sharing and giving. The Custos quoted a fragment of prayer composed by Cardinal Martini, inspired by the journey of St Simeon and St Cleopas, a journey which “is never finished but which we still and continuously have to take in ourselves”:

“When, as evening falls, you had mentioned continuing your journey beyond Emmaus, we begged you to stay. We will address this prayer to you, spontaneous and passionate, infinite other times during the evening of our bewilderment, of our grief, of our immense desire for you. But now we understand that it does not reach the ultimate truth of our relationship with you. Indeed, you are always with us. It is us, on the other hand, who do not always stay with you, we do not dwell in you. This is why, o Lord Jesus, we ask you now to help us stay with you all the time, to take on with joy the mission that you entrust to us: to continue your presence, to be the gospel of your resurrection” (C.M. Martini, Partenza da Emmaus, Milano 1983).

At the end of the celebration, Fr. Arturo Vasaturo, ofm, Rector of the Basilica of the Manifestation of Jesus, addressed a final greeting to the Custos and to the participants in the celebration, wishing to all “to be perfumed bread for others, fragrant bread, the bread of life that we break for those who are next to us.” Fr Arturo also greeted and thanked two of his brothers, Fr. Joseph and fr. Dennis, at the end of the experience of Inter-obediential fraternity made up of Friars Minor and Conventual Friars which had started in Emmaus in 2017. 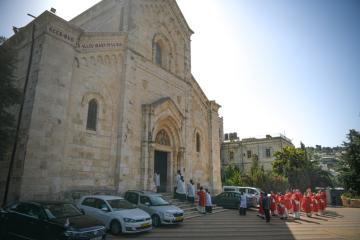 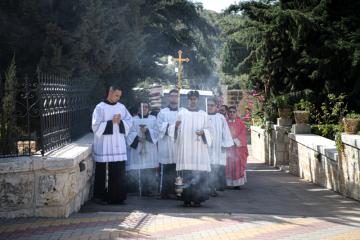 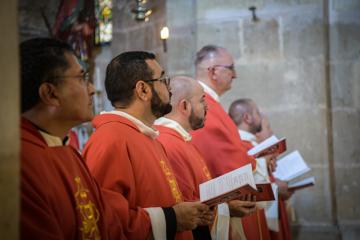 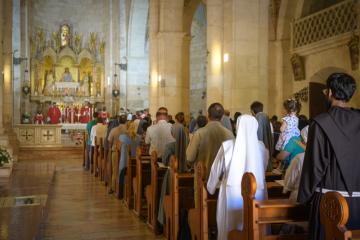 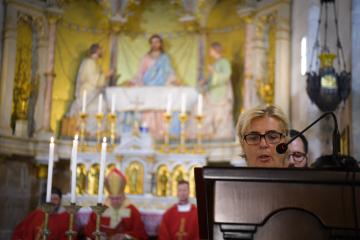 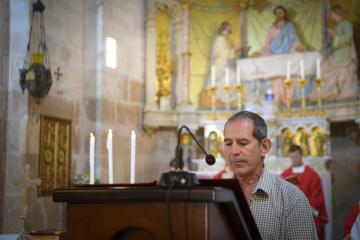 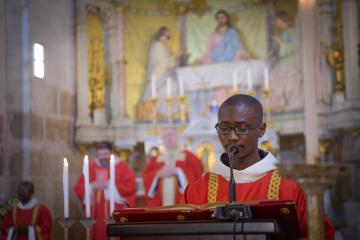 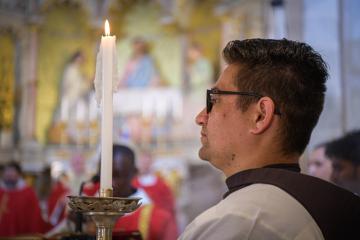 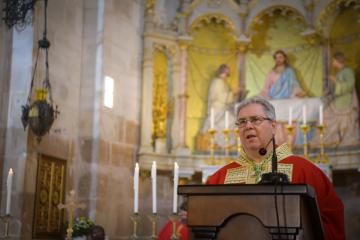 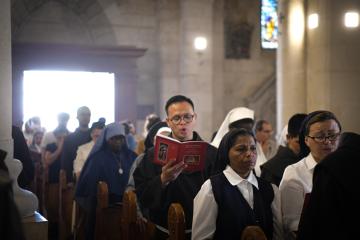 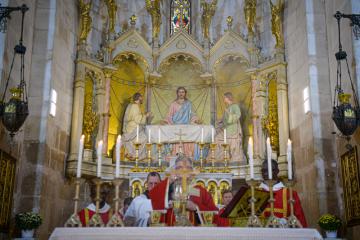 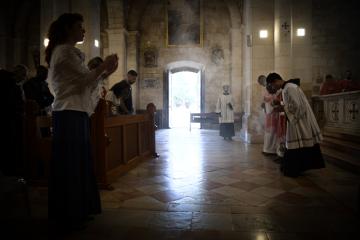 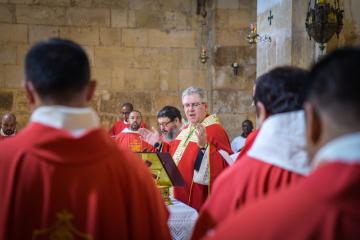 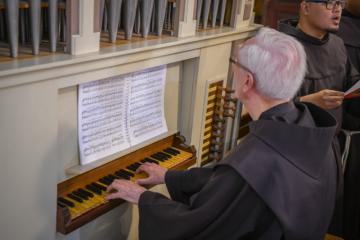 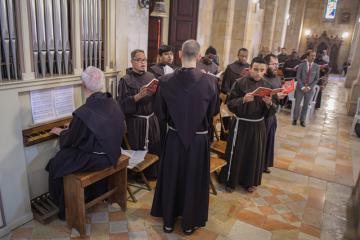 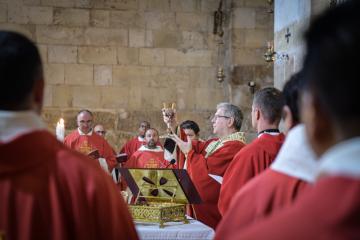 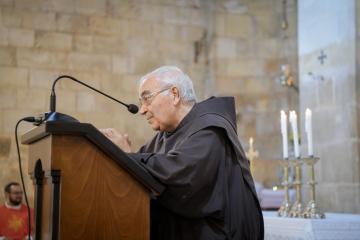 Emmaus Al-Qubeibeh: the Easter Monday of the Custody