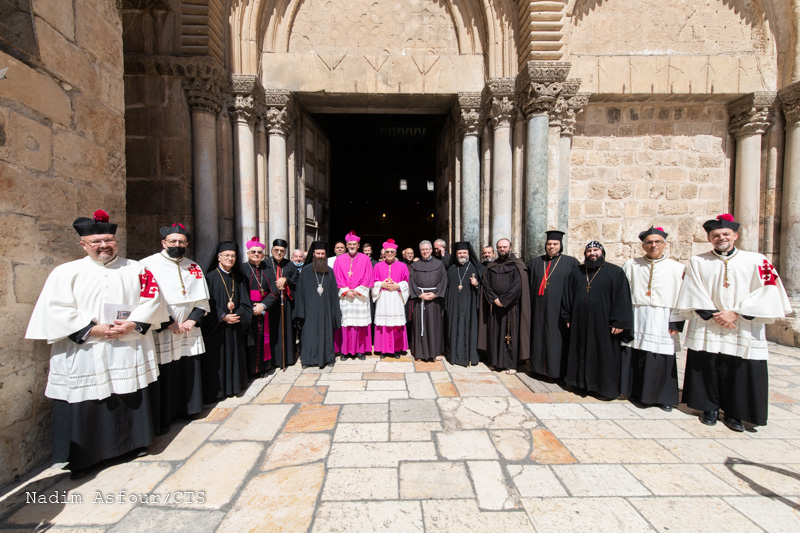 On Thursday 30 September, Mons. Adolfo Tito Yllana made his solemn entrance to the Basilica of the Holy Sepulchre through the wide open doors, accompanied by the Christian religious authorities of the Holy Land. This important moment marks, as tradition has it, the official welcome of the newly-appointed apostolic delegate in Jerusalem.

Mons. Adolfo Tito Yllana entered the Old City of Jerusalem from the Latin Patriarchate, going through the Jaffa Gate, where historically the pilgrims entered. From there, he reached the Holy Sepulchre, where the Custos of the Holy Land, Fr. Francesco Patton and the Greek Orthodox and Armenian authorities were awaiting him.

“Welcome to the heart of the Holy Land”, said the Custos of the Holy Land to the apostolic delegate. “In this land and in this City, every single gesture and every single word have  such  weight and  resonance that charity and prudence have to impregnate every action and every speech,” Fr. Patton continued. “It is this gift of wisdom, charity and prudence that we invoke for you, in your diplomatic service in this Land, in the countries that come under your mandate and in this City”. The Custos said words of gratitude for the support of the Holy Father to the Franciscans of the Holy Land and ensured the same for Mons. Yllana: “As Friars Minor of the Custody of the Holy Land, we are close to you, we assure you of our constant prayers and our faithful and loyal collaboration.”

The Latin Patriarch of Jerusalem, His Beatitude Pierbattista Pizzaballa, in his welcome speech, wanted to present to the new apostolic delegate the multi-shaped Church of the Holy Land, made up of faithful of different languages and nationalities. It is a Church that operates in  a multi-religious environment, characterized by a “wounded and divisive political  and social context.”. “Just as here the women of the Gospel came to pour balms and oils on the wounds  in the pierced body of Jesus, we are also called to pour the balm of hope and the oil of mercy  on the life of our community,” His Beatitude Pierbattista Pizzaballa said. “We ourselves have to be the balm and the oil, the perfume of resurrection and life.”

“On this solemn occasion, representing the successor of Peter in the person of Pope Francis, I bring you his warmest greetings of communion  in the same hope and love of the Lord Risen”, Mons. Yllana said. After having thanked all the bishops as well as  the Consuls General and the diplomatic representatives for their welcome, the  apostolic delegate extended the Holy Father’s blessing to all those present. “Sharing a single faith in Our Father, I extend my fraternal greetings to all my brothers and sisters of the Muslim and Jewish faiths in the Holy Land with whom I pray that the presence of the love of the living  God can accompany each of us in our communities,” he added.

The Holy See had announced the  appointment of Mons. Adolfo Tito Yllana, 73 years old and of Filipino nationality, on 3 June and the archbishop arrived in Jerusalem a few weeks ago. Before this year, Mons. Yllana had already been to the Holy Land twice, but as a pilgrim, in 1975 and in 1997.

A member of the pontifical diplomacy since 1984, he has served in Ghana, Sri Lanka, Turkey, Lebanon, Hungary, China, Papua New Guinea and the Solomon Islands, Pakistan, and the Democratic Republic of the Congo. He had been in Australia or six years when Pope Francis chose him  as his delegate in the Holy Land.

“Today’s solemn entrance to the Holy Sepulchre has moved me and strengthened what I have always known: the nucleus of everything is that the Servant offered himself to die and this is also my vocation. If the grain of wheat does not die, it does not bear

The apostolic nuncio in Israel and Cyprus and apostolic delegate in Jerusalem and Palestine has already presented his credentials to the President oi Israel, Isaac Herzog, and has also met the Palestinian Foreign Minister Riyad al-Maliki. “In the meeting with the other, the first thing we have to look at is the human person, without making any distinction,” he recalled. “We have all been created in the image of God.” 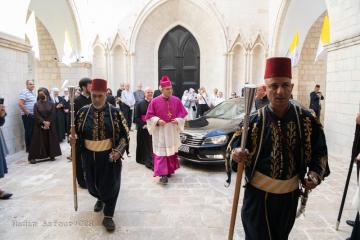 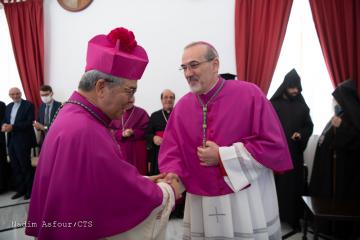 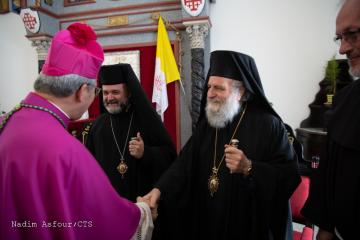 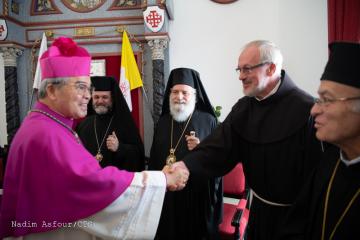 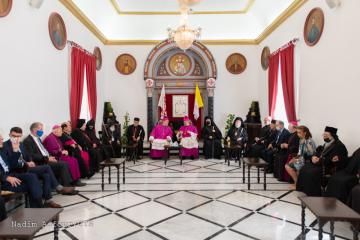 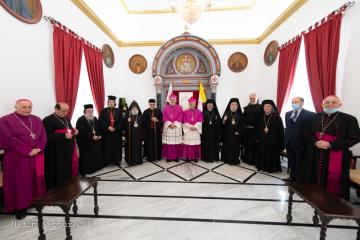 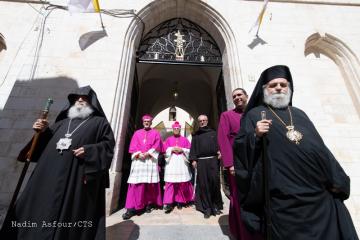 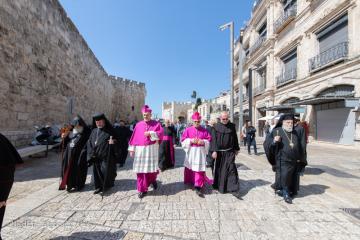 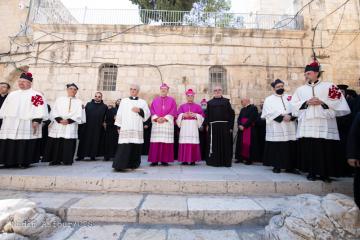 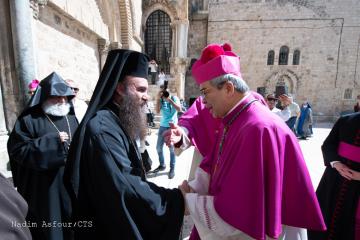 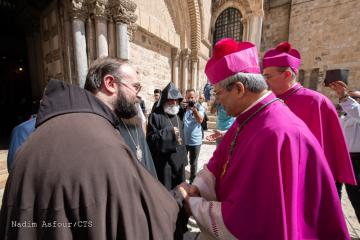 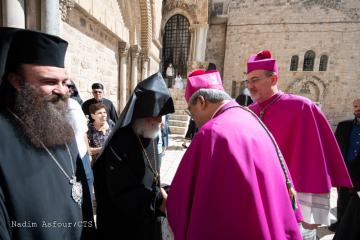 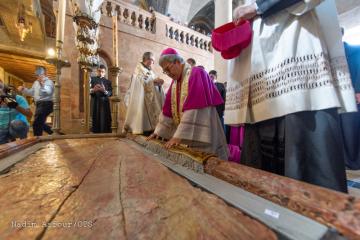 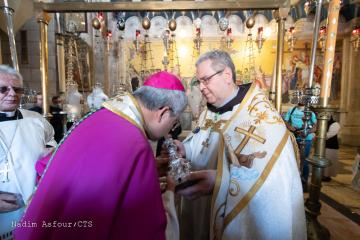 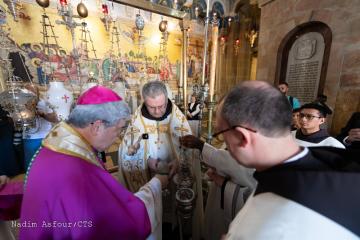 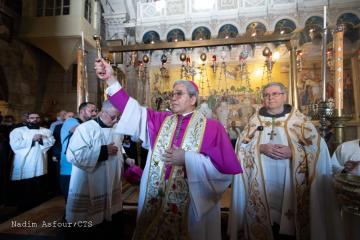 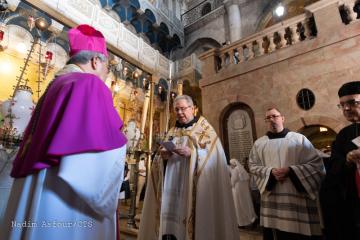 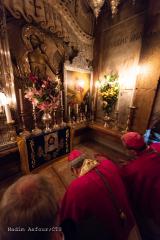 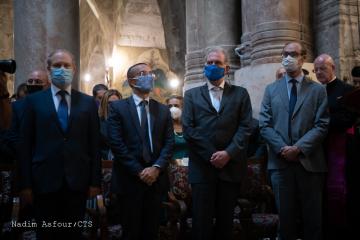 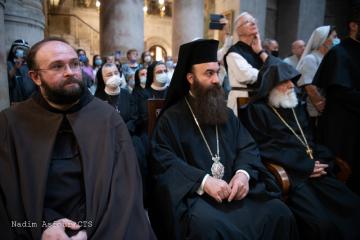 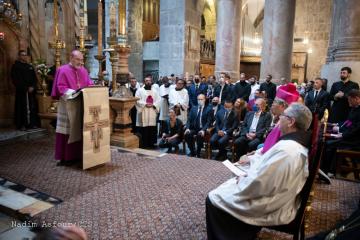 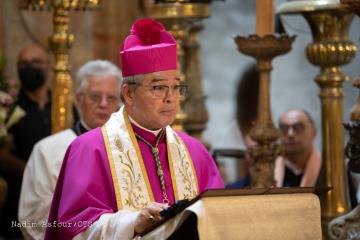 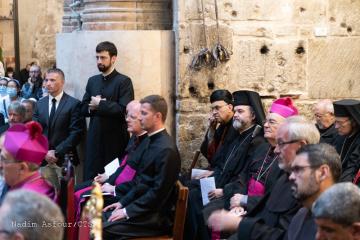 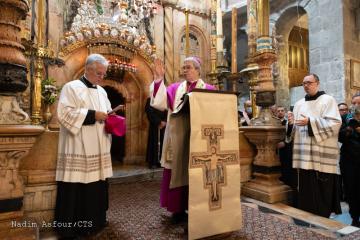 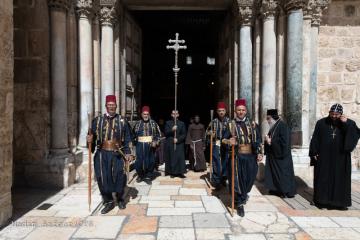 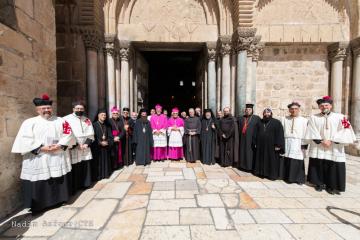 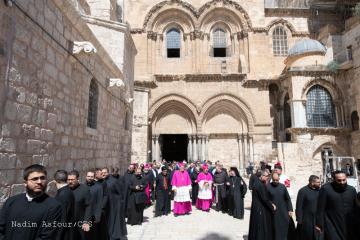