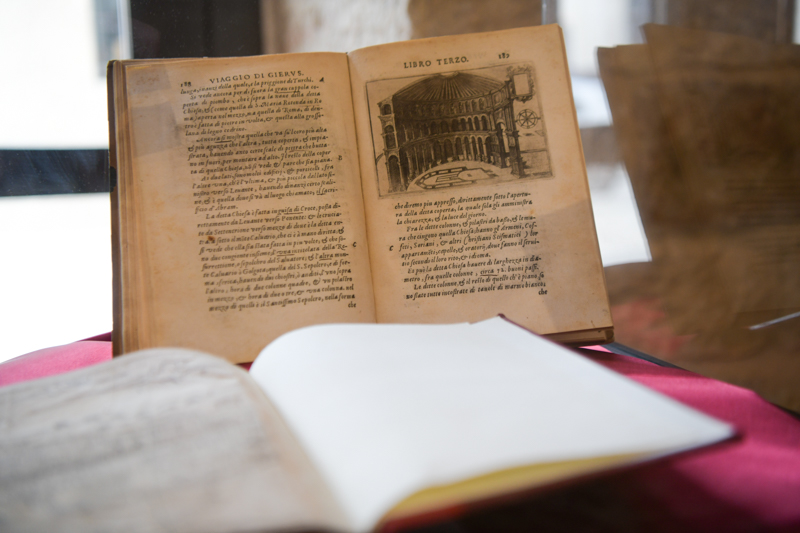 On Monday 7th November, the exhibition “Witness of the resurrection” organized by the CRELEB (Centro di Ricerca Europeo Libro Editoria Biblioteca) of the Università Cattolica  and by Pro Terra Sancta was inaugurated as part of the “Libri Ponti di Pace” [Books as Bridges of Peace] project, conceived by Edoardo Barbieri, Full Professor of History of the Book and of Bibliology at the Università Cattolica in Milan. The aim of the event is to offer the general public a journey in time to discover the Holy Sepulchre, through the accounts of pilgrims who left a trace of them in their diaries and memoirs. The exhibition thus features the itineraries of pilgrimage from the 15th to the 20th century selected from the ITS collection dedicated to Itineraries in the Holy Land and kept at the General Library of the Custody.

“The idea came about from seeing the restoration of the floor of the Basilica of the Holy Sepulchre, which started in the spring of 2022,” explains Prof. Edoardo Barbieri. “We wondered: how does the Library of the Custody tell us the story of the Sepulchre? This is why we started to look for books and manuscripts that handed down accounts and descriptions of this place, to offer an overview of the very many evolutions of the Holy Sepulchre from the point of view of the pilgrims who have come here over the centuries. Our objective is a legitimate part of the initiative “Libri Ponti di Pace”, in which the heritage of the library is communicated simply and efficiently to the more general public and becomes a tool and an occasion of encounter between people belonging to different cultures.

How the exhibition is structured

“The material is divided into 3 parts,” Prof. Barbieri continues, “The accounts of the pilgrimage, i.e. the words handed down by the narratives of the pilgrims, the descriptions more focused on the basilica, and lastly, the studies, with a more technical and scientific approach to the building and its structure. The route offered this way ought to help reflect on the importance that so many Christian generations have attributed to this monument, the heart of Christianity.”

Outstanding among the texts and manuscripts on display to the public, are the copy of the manuscript by fra  Niccolò da Poggibonsi, who made the pilgrimage in the Holy Land in the mid-14th century; the diary of Bernhard von Breydenbach, who started the production of illustrated books with one of the most marvellous travel books of the 15th century, and the Treatise on the buildings and plans of the places of the Holy Land of 1609 by fr. Bernardino Amico da Gallipoli, guardian of the Convent of Jerusalem in 1576, the invaluable illustrations of which are the result of meticulous measurements and  surveys carries out on the spot by the author, and important because they provide a realistic and detailed illustration of the holy places.

“The synergy between CRELEB, the Library of the Custody of the Holy Land and the Pro Terra Sancta association is giving abundant and good results,” emphasizes fr. Rosario Pierri, dean of the Studium Biblicum Franciscanum. “Thinking of this fertile activity, verse 13,52 of the Gospel according to Matthew came to mind: “Then every scribe who has been instructed in the kingdom of heaven is like the head of a household who brings from his storeroom both the new and the old,” because a library like the Custody’s, so rich and full, needs experts who can find both new and original things, unknown even to those in the trade, and old things, even if already known.”

The pilgrim in the steps of God incarnate

“I find the title “Witness of the resurrection”,” continues Fr. Rosario Pierri, “exactly right: it refers to a single place that protects two places, both of which have remained in the memory of the disciples of Jesus: Golgotha and the tomb. The quantity of accounts by pilgrims who reached and visited this place over the centuries is impressive, leaving us descriptions which are fundamentally important for us. The Christian pilgrim seeks and follows an itinerary that takes him to tread in the footsteps of Jesus and it is this total immersion which forms the peculiarity of the Christian pilgrimage in the Holy Land, the heart of which is represented by the Basilica of the Holy Sepulchre.”

Fr. Lionel Goh, director of the General Library of the Custody, joins in the satisfaction for the quality of the exhibition and for the purpose it sets itself: “The library is like a silent treasure: the aim and the mission of those who look after it is not only to reserve the written memories, but also the possibility of making them available to the new generations of today. This exhibition represents an important stage on a journey of promoting the priceless ancient and modern collections of the Franciscan libraries in the Holy Land.”

The exhibition “Witness of the resurrection” will remain open to the public from 7th to 11th November, from 9 a.m. to 6 p.m. and volunteers will always be on hand for guided visits, in several languages, of the three different thematic areas. 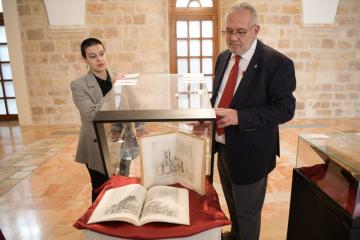 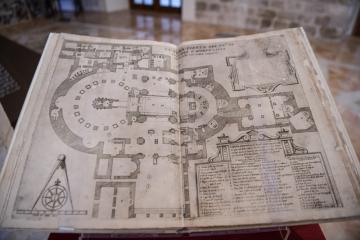 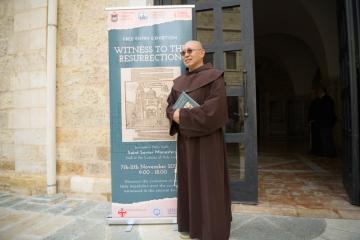 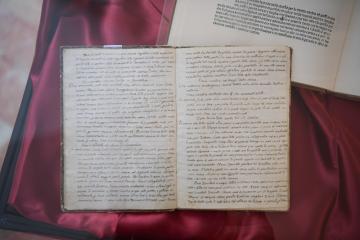 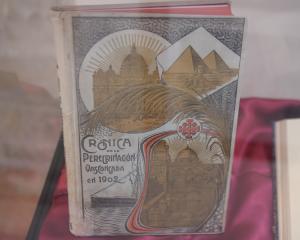 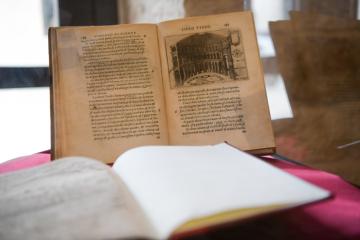 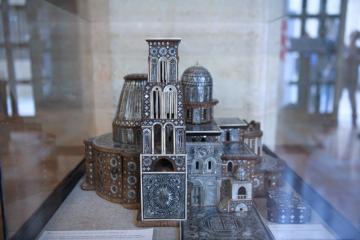 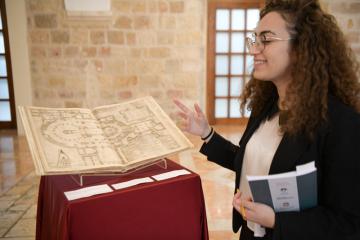 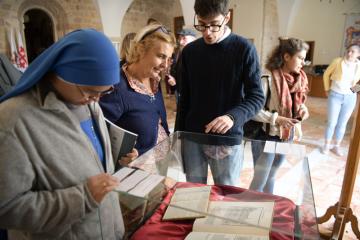 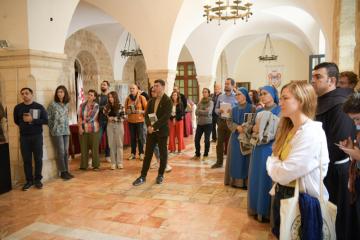 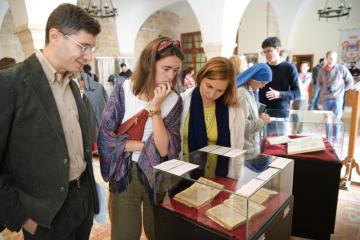 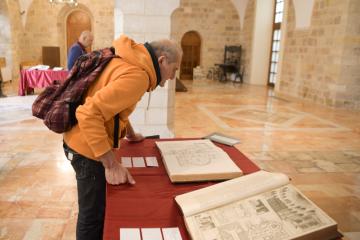 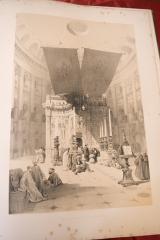 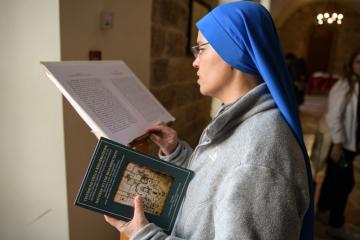 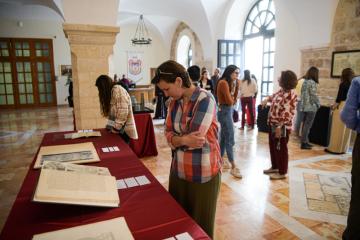 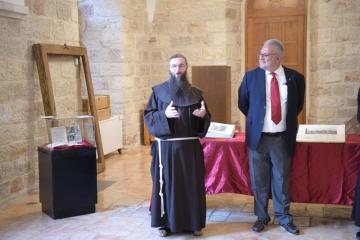 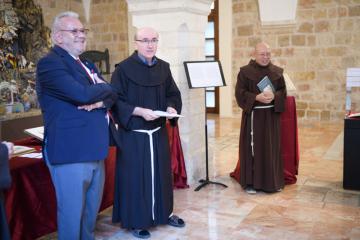 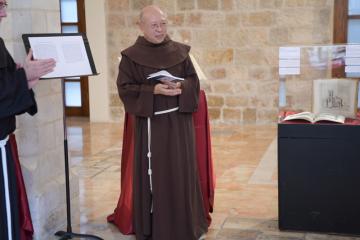 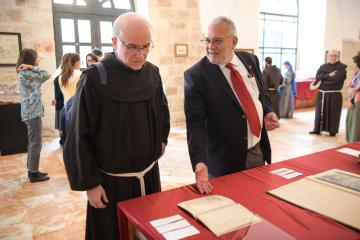 Exaltation of the Holy Cross, solemn mass on Calvary presided by the Custodial Vicar

Works at the Holy Sepulchre: the heads of the Churches agree on the choice of the floor stone