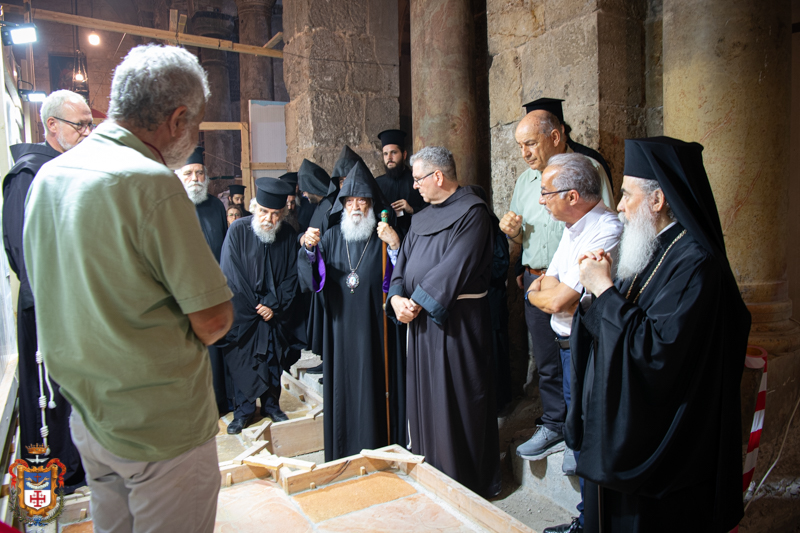 The pilgrims present in the Holy Sepulchre in the late afternoon of Tuesday, 30 August were surprised by the almost incognito presence – considering the ritual entrance in grand style which usually accompanies them on religious holidays- of the heads of the major Churches, the custodians of the tomb of Jesus.

Each of them arrived on their own at the established time: the Greek Orthodox Patriarch, Theophilos III, preceded by the Kawasand followed by monks and advisors; theCustos of the Holy Land, Fra Francesco Patton; Mons. Sevan Gharibian, the Armenian Grand Sacristan of Jerusalem,representing the Armenian Apostolic Patriarch.

In the area that marks out the Edicule, the heads of the Churches were preceded by Fr. Dobromir Jasztal, ofm,coordinator of the works in the Basilica of the Resurrection for the Custody of the Holy Land, and  DrOsama Hamdan, the appointed architect. The latter presented the agenda, prepared by the team of La Veneria Reale,appointed to restore the floor of the Anastasis.

At the centre of this meeting in the field, there was the choice of the type of floor stone that was to replace the missing slabs or those that are excessively damaged, at the end of the works. The friars listened attentively to all the information that was presented to them. It is not a question of “choosing a new floor for the bathroom”, but of restoring the most important building in Christianity. There are many criteria and variables to take into consideration.

AS in all restoration works, it is important to pay tribute to the elements of the past that can survive. All the stones that can be cleaned and that are considered sufficiently resistant will be laid in the exact place and in the same position as where they were taken from. When this is not possible, the stones will be replaced with the intention of filling in the existing gaps or the slabs that are too damaged.

As the work started in the northern art of the edicule, attention was concentrated on the progress of the works in this area.

In the choice, aesthetic aspects, such as the colour, as well as the nature of the rock, are taken into consideration, in order to replicate as faithfully as possible the appearance of the old stones. However, these slabs must be sturdy enough to resist the pressure of the great crowds that fill the area around the tomb. They also have to be strong enough to resist the blows of the kawas (the janissaries) who with their batons beat out the rhythm of the solemn processions. The rock also has to resist the stains of wax, oil or any type of litter that dirties the floor after the tourists have passed through. It also has to be resistance to the detersives that will be used in the future, despite the, cleaning done with petrol which the area around the kiosk had undergone until the present day!The resistance of the colours also has to be tested. We know that the stones vary in colour – and sometimes in density – when they come into contact with the air, once they have been extracted fromthe quarries, as well as during the extraction process itself. The colour of the edicule, restored and cleaned in 2016, is not the same as when the works were completed in March 2017. The Greek Orthodox Patriarch added that attention must be paid “not to let the pilgrims have their waybecause we know and it can be seen that they do not hesitate to use instruments to extract and take away relics from the basilica."

To help them in their choice, the heads of the Churches had at their disposal samples of stones that met most of the criteria identified. Dr Sara della Felice and Dr Sara GambellaofLa Veneria Realeset up three areas of two square metres each, placing the original stones ready to be reused alongside the new slabs. Osama Hamdan illustrated the advantages and the disadvantages of each type of stone, after having answered the many questions by the participants. All with expert and in-depth knowledge of the purposes of the basilica and its architecture, they emphasized that the stones selected could vary between the rotunda around the edicule, where a grater aesthetic harmony is desired, and the ambulatory. where the type of the stones is different, darker and with ochre-yellow tones.

Naturally, the conformity of the soil that will receive this new floor and the safety of the lower stratigraphic levels are taken into consideration. The same applied to the nature of the joints that seal the stones, which will be injected under pressure so that they run as far as possible along their thickness, guaranteeing greater cohesion between each slab and a better resistance to both vertical and horizontal pressure. In addition, while the current stones have a thickness comprised between 4 and 8 centimetres, the future ones should be 12 centimetres thick.

The attention given to the decision-making process reflects the desire of the Churches to do restoration of the heritage that is sustainable and of quality. In due time, the researchers of La Sapienza and of La Veneria Reale will be able to provide much information on the history of the flooring of the basilica, on the origin of the stones and on the date when they were laid. These elements, however, which will complete the historical data on the history of the building, are still being studied.

Behind the fences of the works, in the area of the Virgin Mary’s Arches, the exchanges took place in a convivial atmosphere. At times even comic, such as when a religious raised the possibility of putting a plastic tip on to the kawas’ batons, since the mark of their blows is clearly visible on certain chipped stones. This observations almost horrified some people for whom it would have been better no longer to have the kawas rather than have them but equipped  with “silent batons”. In a spirit of agreement, it was decided to ask the Kawas to reduce their ardour in hitting the floor of the basilica.

In this regard, the churches decided on a series of combinations according to the various areas of the basilica. For the area around the tomb of Jesus, however, the aesthetic of pink shades prevailed. At the end of the works, the restored floor will without a doubt be more beautiful and less dangerous but for a few months it will be slightly surprising for those who are used to the current floor, which  is irregular, dark and uneven.

Discover all our magazines HERE 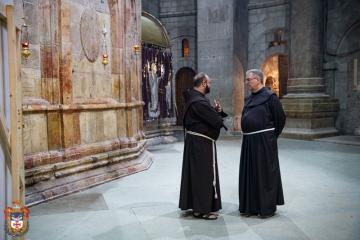 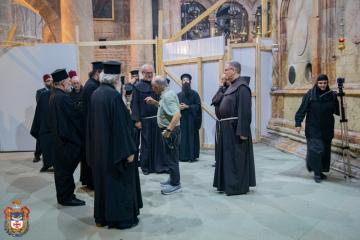 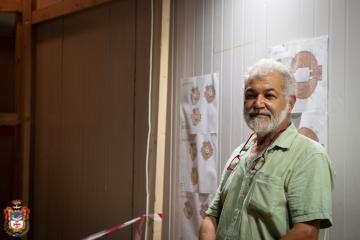 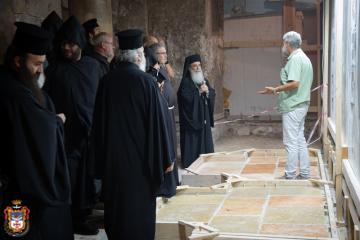 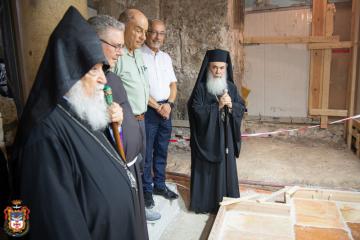 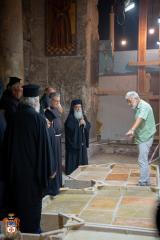 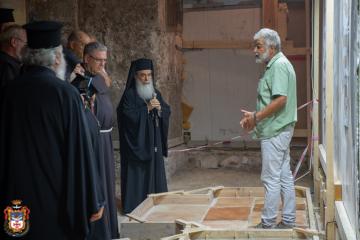 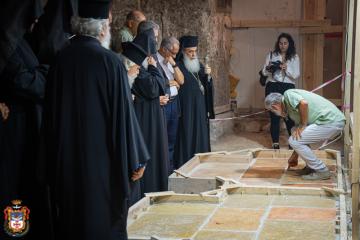 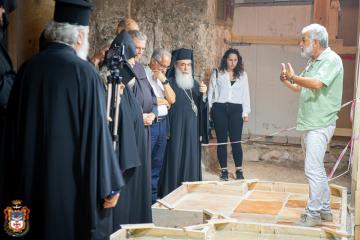 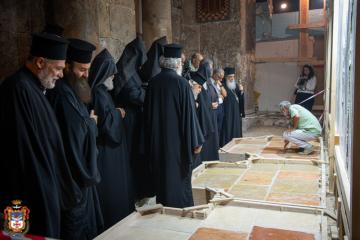 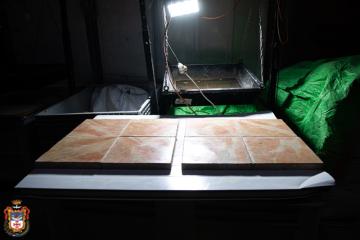 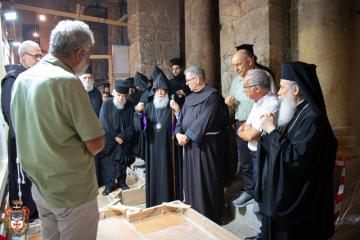 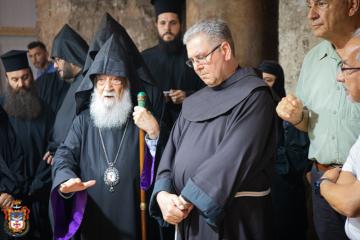 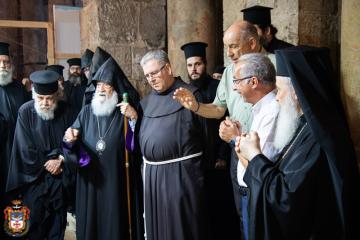 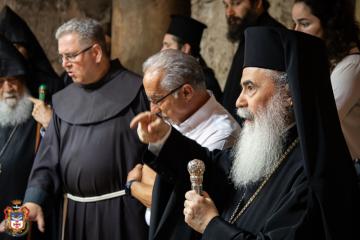 “By a new name”: the Franciscan march in Syria seen through the eyes of Fr. Johnny Jallouf

Exaltation of the Holy Cross, solemn mass on Calvary presided by the Custodial Vicar