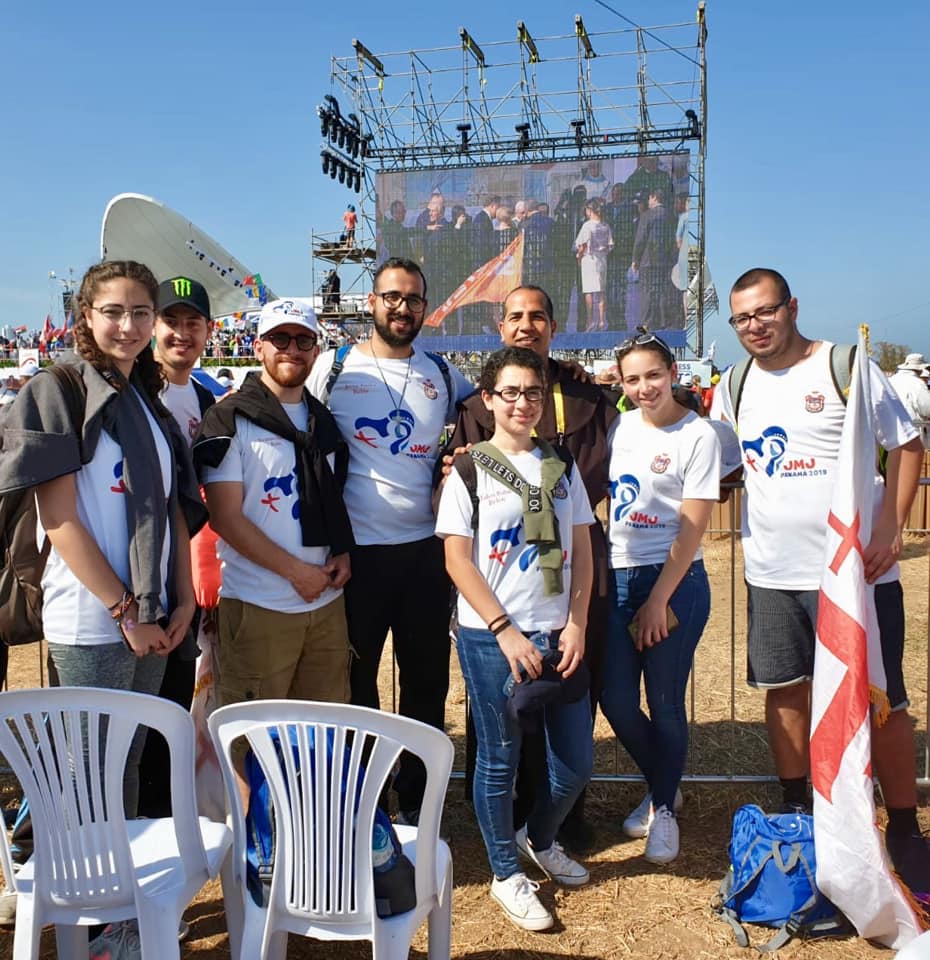 World Youth Day brought together participants from 156 countries in Panama.

Among the registered there were young people from the Holy Land. And more than two weeks after the great event, the experience of meeting the Pope and youth from all over the world continues to live within each of them. This group of 10 young people from Bethlehem gathered to share their experience in the Central American country.

During the long journey, the compatriots of Jesus, led by Brother Emad Kamel, could count on the help of the Embassy of Panama in Palestine and the Custody of the Holy Land! When they arrived in the country, they were received by the Panamanian president himself, Juan Carlos Varela, and they offered him a Child Jesus of Bethlehem!

Br EMAD KAMEL, ofm - Youth Pastoral Animator Holy Land
"The president was hosting us, but it was a surprise to see him there waiting for us at the Panama airport. It was very touching for the boys because they are ordinary young people, but the fact that they came from the Holy Land, from Bethlehem, was very important and made our identity as bearers of the perfume of the Child Jesus shine wherever we were".

An important experience both for the spirituality and for the cultural heritage of these young people.

ORIANE HOSH - Student
"We saw the Pope and many Christians; we saw the faith that there is among young people, men and women of other countries. It was a sweet, beautiful spiritual experience. The Pope walked among us and it was exciting to see him up close".

While exchanging experiences, everyone thought it was interesting to attract the attention of people who came to Panama from all over the world because they are from the Holy Land!

TALEEN RAHIL - Student
"Many came to us when they discovered that we were from the Holy Land and said that it was wonderful to meet us; when we realized that they felt something special, werealised where we come from...and this is something we may forget...they reminded us how blessed we are for this".

For Ibrahim it was also moving to see the Pope up close and for him one of the most intense moments was the mass in the cathedral.

IBRAHIM HANDAL - Student
"It was the first time I saw the Pope, like this, face to face... it struck me when we went to the cathedral of Panama, a temple that was abandoned and restored for a mass with the Pope...".

The simplicity of the people of Panama and the gestures of the Successor of Peter also impressed the kids!

LEEN HAMATI - Student
"I was impressed by the humility of the Pope, who insisted on walking among the young, to see them up close".

JIMMY LAMA - Student
"It was a fantastic experience. It was a spiritual day. People sacrificed their work and time to be there, to see the Pope and to experience the faith. Personally, I experienced something very strong! It was wonderful to see the Pope representing Peter, the head of the Catholic Church".

And after sowing in the good land...it's time to reap the fruits!

Br EMAD KAMEL, ofm - Youth Pastoral Animator Holy Land
"We hope that this experience will bear fruit in the hearts of young people, fruits for their life which is renewed in their love for Christ. As it was during WYD, following the example of Mary we learn to say, yes, Lord, here I am to do your will! We, like Mary, are ready to accept God's will, to put it into practice"!

The Franciscan March: "Don’t be afraid of putting out into the deep"

The Franciscan March in the Holy Land