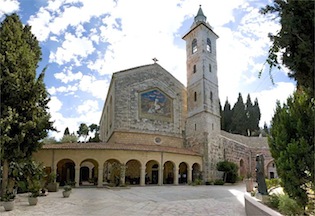 From the church of S. John to that of the Visitation, there is a spring called the "Virgin Spring" by the pilgrims of the fourteenth century.
According to tradition, it was here that Mary met her cousin Elizabeth and sang a hymn of praise (the Magnificat), a song of gratitude to God.

"My soul proclaims the greatness of the Lord;
my spirit rejoices in God my savior.
For he has looked upon his handmaid’s lowliness;
behold, from now on will all ages call me blessed" 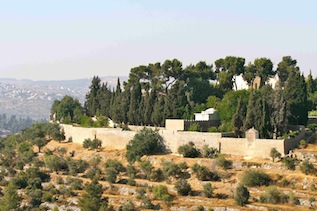 The Virgin Mary’s visit to Elizabeth was first set in a place other than that of the birth of Saint John at the beginning of the 14th century: "Zechariah’s house is in the mountains of Judea.. In this place there are two churches… and between these churches flows a spring that is quite full of water. At the site of the first church, it is said, Elisabeth was greeted by the Blessed Virgin Mary. It is also said that the blessed John the Baptist was hidden there during the Slaughter of the Innocents. At the site of the second church, the blessed John the Baptist was born" (Brother Giovanni Fedanzola of Perugia, 1330).
Going beyond the gospel episode, the same church also conserves the memory of the hiding of Saint John the Baptist, taken up by the apocryphal protoevangelium of John (2nd century): "Beyond a small valley full of trees is the mountain toward which Elisabeth ran with her own son, saying "Mountain! Receive a mother and son!" And the mountain opened and offered them refuge. Herod’s soldiers who were following them reached that point and finding no one, returned, confused. Even today one can see the place where this happened, marked in the rock. Above it is a small church, under which is a little grotto and in front of its entrance another little church has been added. From this grotto flows a spring that quenched the thirst of Elizabeth and John while they were in the mountain,staying there, served by an angel, until the death of Herod." Relics of "earth from the grotto of Elizabeth and John" were conserved as early as the 7th century in Rome, in the Lateran treasury and elsewhere. A stone, exposed in the crypt, continues this tradition today. 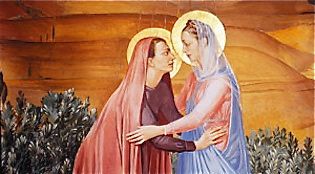 During those days Mary set out and traveled to the hill country in haste to a town of Judah, where she entered the house of Zechariah and greeted Elizabeth. When Elizabeth heard Mary’s greeting, the infant leaped in her womb, and Elizabeth, filled with the holy Spirit, cried out in a loud voice and said, "Most blessed are you among women, and blessed is the fruit of your womb. And how does this happen to me, that the mother of my Lord should come to me? For at the moment the sound of your greeting reached my ears, the infant in my womb leaped for joy. Blessed are you who believed that what was spoken to you by the Lord would be fulfilled." And Mary said:
"My soul proclaims the greatness of the Lord;
my spirit rejoices in God my savior.
For he has looked upon his handmaid’s lowliness;
behold, from now on will all ages call me blessed.
The Mighty One has done great things for me,
and holy is his name.
His mercy is from age to age
to those who fear him.
He has shown might with his arm,
dispersed the arrogant of mind and heart.
He has thrown down the rulers from their thrones
but lifted up the lowly.
The hungry he has filled with good things;
the rich he has sent away empty.
He has helped Israel his servant,
remembering his mercy,
according to his promise to our fathers,
to Abraham and to his descendants forever."
Mary remained with her about three months and then returned to her home. 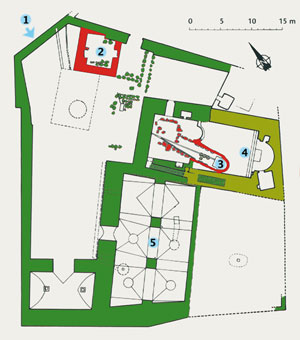 In the 14th century the sanctuary was under the care of Armenian monks, who left it shortly afterwards. The Franciscans acquired the site in 1679.
The excavations (by Father Bellarmino Bagatti, 1937) conducted in view of the construction of a new sanctuary (by the architect A. Barluzzi, 1939-40) brought into evidence the remains of the ancient memorial structures that make up part of the upper church and the crypt with an antique gallery faced in stone that ends over a well permanently fed by a thin stream of water. Of note is the well-conserved Crusader hall above the south side of the church. 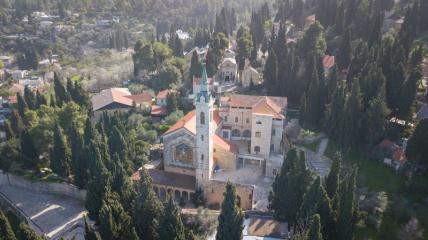 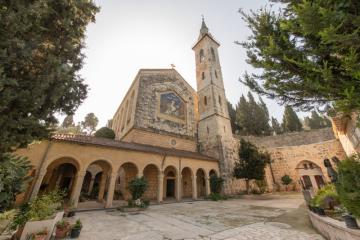 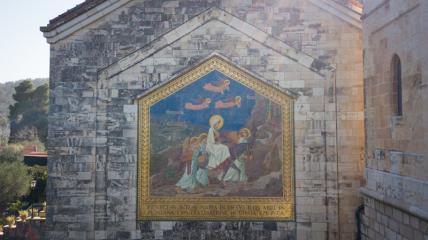 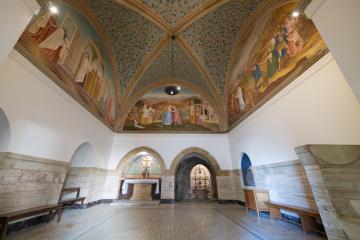 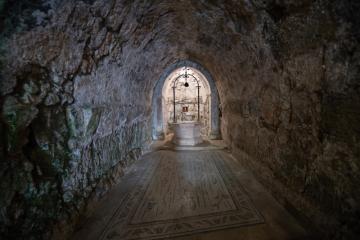 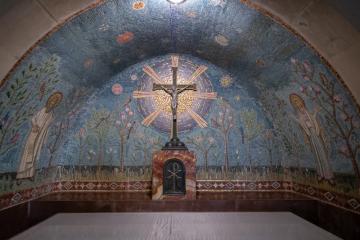 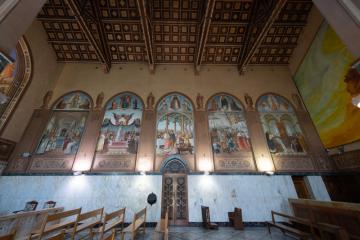 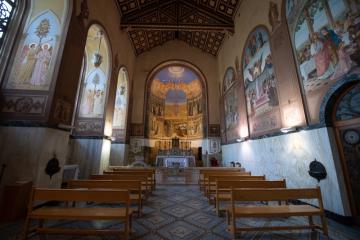 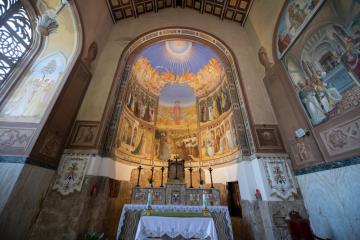 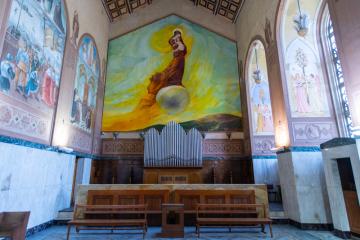 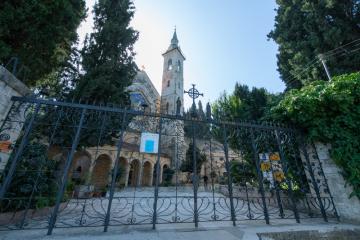