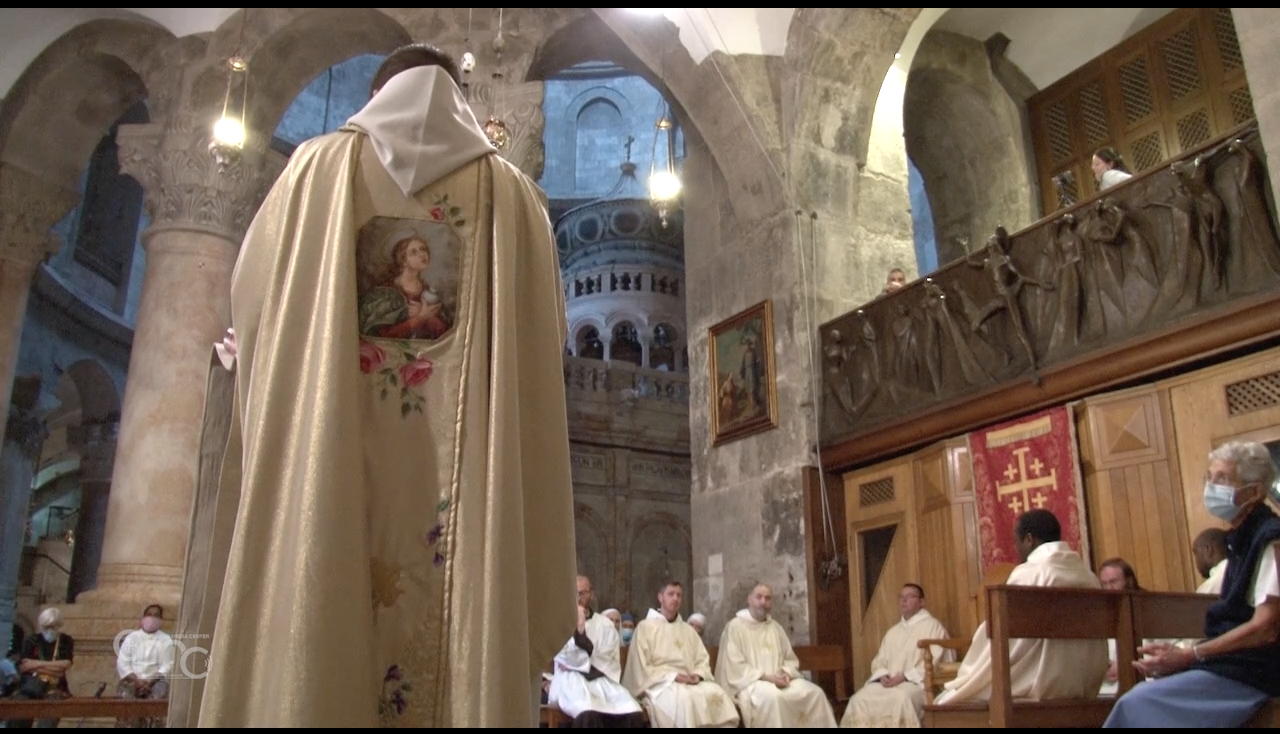 It was in this place, inside the Basilica of the Holy Sepulchre, that Mary Magdalene, after seeing Jesus risen, exclaimed in Hebrew: "Rabbuni!", which means Master. But who is this woman who witnessed the crucifixion and resurrection of Jesus Christ? Her story takes place in a city in Galilee.

On the west coast of the Sea of Galilee, 36 km from the city of Nazareth and very close to Mount Arbel, there is Magdala.

Magdala has an enchanting historical and archaeological wealth.

PATRICIA SILVEIRA
Volunteer
"In 2009 this synagogue, dating back to the first century, was found here.
Here stood the market of Magdala: in this place a stone used for grinding and ovens was found. A bit like we see the streets reserved for the market in the old city of Jerusalem, in the same way this would be the part dedicated to the market here in Magdala. At the back we also have the ritual baths, where there are the seven stairs that the Jews used to walk on during the purification."

In addition to the whole archaeological part, pilgrims who come to Magdala can also find a special place of spirituality.

PATRICIA SILVEIRA
Volunteer
"Here is the church: it is called "Duc in Altum", whose meaning recalls "advancing towards the deepest waters". We have the main church and also four chapels. This church was dedicated in 2014, when the inauguration of this space was held.
In that space we find the women's atrium. Why did they do that? Because Jesus came to bring dignity to women."

PATRICIA SILVEIRA
Volunteer
"This is the lower part of the Duc in Altum, of the church...here there is an ecumenical chapel. This chapel is called the "chapel of encounter", because it is a meeting point between Christians and Jews. Then we have this beautiful image of the encounter of the bleeding woman with Jesus."

Fr VAGNER BAIA
Canção Nova Community
"Magdala means tower...it comes from "fish tower": it means that this must have been a place where people took the fish and left it to dry. This woman lived here, but she was a woman who lived a life maybe unregulated. Here Jesus will cast out 7 demons."

The woman who was considered a sinner came to holiness after her life was transformed by Jesus, and today this woman is solemnly celebrated by the church. On the feast day dedicated to her, a solemn Holy Mass was celebrated in the Basilica of the Holy Sepulchre in Jerusalem. In his homily, brother Salvador Rosas Flores, President of the Convent of the Holy Sepulchre, said: "Saint Mary Magdalene is an example of a true and authentic evangelizer.”

Br SALVADOR ROSAS FLORES, ofm
President Holy Sepulchre Convent
"In these 4 years, since Pope Francis decreed that Mary Magdalene would have a universal feast throughout the Church, here in the Holy Sepulchre we can say that not much has changed. We remember that we are in the exact place of her encounter with the Risen Lord: here there has always been this tone of solemnity, with which we remember this courageous woman, a woman who left the dark past to encounter Jesus. And the encounter with him, knowing him and living with him and for him, has become an example for us."

Saint Mary Magdalene pray for us!