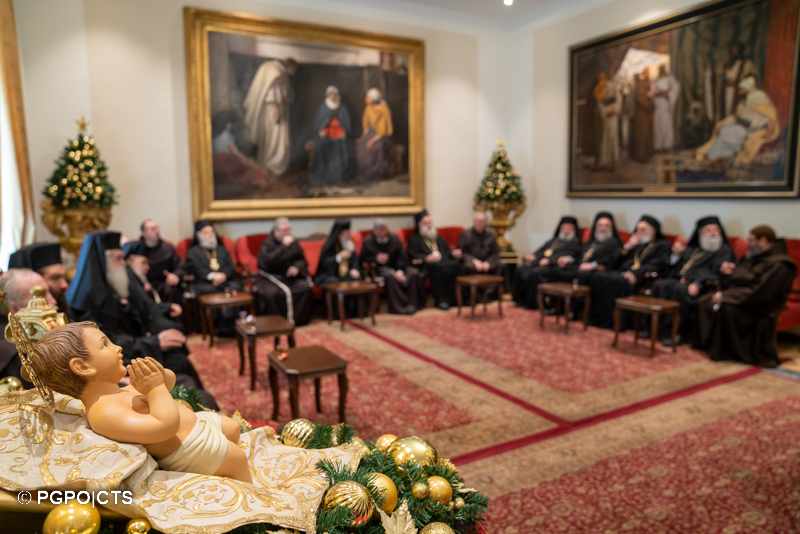 As tradition has it, the ritual exchange of Christmas greetings between the Christian communities was repeated again this year in Jerusalem. Every year, two days after 25th December, the various Christian denominations in Jerusalem visit the Custody of the Holy Land to offer their Christmas greetings to the friars and to the Father Custos. As it was repeated several times during the exchange of greetings, it is not a question of protocol requirements, but gestures that express the most genuine fraternity between communities united by the same mission. The beauty of this harmonious diversity also appears in the Holy Land through the celebration of Christmas on different dates. Whilst the Latins, who follow the Gregorian calendar, celebrated the Christmas of the Lord on 25th December, most of the Orthodox communities, faithful to the Julian calendar, will celebrate on Saturday 7th January. This means that the cordial exchange of Christmas greetings is repeated twice. The first time on 27th December with the visit of the various Orthodox delegations to the capitular hall of St Saviour’s convent; the second time after the Orthodox Christmas, with the Franciscans going to the seat of each Patriarchate to exchange the courtesy and honour tradition.
The first to be received were the Greek Orthodox, followed by the Armenian Orthodox, the Copts and the Syriac Orthodox. It was then the turn of the visit to the Greek-Melkite Patriarchate (Catholics) by the Franciscans and, again, receiving the last two delegations at St Saviour’s convent: the Ethiopian Orthodox and the Patriarch of the Latins.

The Greek Orthodox delegation was led by His Beatitude Theophilus III who, addressing the Custos of the Holy Land, Fr. Francesco Patton, and the community of friars, invoked hope as a response to the uncertainties of the present. This hope is born and strengthened starting from the celebration of the Incarnation which has just been celebrated. Lastly, the Greek Patriarch did not forget to thank the Custos Patton for the common commitment aimed at assuring the moral union of Jerusalem and the protection of the Christians.

The Father Custos thanked Theophilus, expressing in the same way his gratitude for the harmonious relationship between the two communities which is becoming increasingly stronger over time. Father Francesco then recalled the restoration of the floor in the Basilica of the Holy Sepulchre as an example of cooperation and thanked the Greek prelate for his synodal spirit.  ir

The second delegation to be received was the Armenian one. The Patriarchal Vicar who led the procession took the floor and, after having extended greetings to all those present, congratulated the Custos Patton for his commitment every day in the Holy Land and for being an example of life and a model of reference for every good shepherd.

Father Francesco returned the greetings and expressed satisfaction for the “fraternal relationship which allows carrying on together the restoration of the Holy Sepulchre.” It is a relationship which expressed a common testimony of faith for the benefit of the whole local community, the pilgrims and their two respective Christian communities.

The friars then sang two other songs in honour of the guests: “Puer Natus” and “Adeste fideles”

The Coptic and Syriac-Orthodox delegations

The Coptic Father Maximus Gerosolomitanus brought the greetings and extended the wishes to the Franciscans in the name of all the Coptic vicariate in Jerusalem. “God wanted to announce the news of his miraculous birth to all people through two types of people: the shepherds and the Magi. They are very different types of people, yet God used them both according to the capacities they had, because Christ reaches everyone and speaks to the hearts of every person. Happy Christmas!”

The Syriac Father Shimun Jan, in the name of the Syriac Orthodox vicariate of Jerusalem, then extended his dearest greetings on this “beautiful occasion of the Nativity of Our Lord Jesus who descended from heaven to here on earth to free us from sin and death.” The Syriac prelate then hoped for liberation for all those suffering, in particular for the Syrians.

The Father Custos recalled that every day in Bethlehem the Christian communities of the Holy Land contemplate the physical place where Jesus was born to the Virgin Mary. It is a place that shows us the humility of God made man for us. And quoting St. Athanasius: “He became man so that we became gods. He revealed himself through the body so that we could have an idea of the invisible father. He supported the violence of men so that we could inherit incorruptibility.” Fr. Patton then wished for joy and peace for the Coptic brothers who live in Egypt and expressed his closeness to the Syriac Church of Jerusalem, praying for peace in Syria.

The visit to the Greek-Melchite Patriarchate

The friars, guided by the kawas, then reached the Catholic brothers of the Greek-Melkite Patriarchate, where they were welcomed by the Patriarchal Vicar, Mons. Yaser Al-Ayyash. He welcomed the Franciscans: “It is always a great joy to meet the Custos and the friars, it is a sign of union and testimony for Christ here in Jerusalem. [...] The church plays a very strong role in protecting the Christians in the Holy Land, and this is what we must think of today, on this feast of Christmas. There is no peace around us, there is war and fear. Our only hope and our only answer is Jesus Christ. Many Christians have migrated, there is now only a small minority here but our hope is placed in this human child born in Bethlehem. Going deep down, we can see a God incarnate, who has come to give us his nature, to give once again grace and eternal life to all of us.”

The Custos exchanged greetings and quoted the Christmas message from the Holy Father, Pope Francis, on the risk of forgetting the mystery we celebrate with Christmas. The answer is in the Gospel, in looking at a poor man and finding real wealth.

After lunch, a delegation of the Ethiopian Orthodox Patriarchate of Jerusalem, led by Father Gebre Selassie, visited the friars at St Saviour’s convent. The Ethiopian father extended greetings to all and recalled the close bonds which united Ethiopia and the Custody. To do so, he quoted the contents of a letter which the Ethiopian emperor Haile Selassie sent to the Governor of Jerusalem in the first half of the 20th century, exhorting the latter not to damage the Franciscan community in the Holy Land in any way.

The Custos sincerely thanked the Ethiopian Father Gebre Selassie and recalled how this moment of encounter represents authentically sharing the mystery of Christmas and the occasion to behave as brothers.

Delegation of the Latin Patriarchate

Lastly, it was the turn of the visit of the delegation of the Latin Patriarchate led by His Beatitude Pierbattista Pizzaballa. The Patriarch, formerly Custos of the Holy Land, cordially greeted Father Patton and the whole of the Franciscan community. “We have many reasons of concern, but no reason to be afraid. God has become man and this is the foundation of our hope. Nothing can stop our testimony which through us and in spite of us, continues to appear here in the Holy Land.”

Father Francesco Patton’s answer was equally as warm, as he emphasized how Christmas always brings a great deal of emotion. To do so, he recalled an episode last Christmas night during the mass he celebrated in the grotto of Bethlehem. He saw people crying.: “This seems to me in harmony with the spirit of our seraphic father, St Francis. It is important to return to the essential, without getting lost in too many digressions. Let’s concentrate on the heart of the mystery of God.” 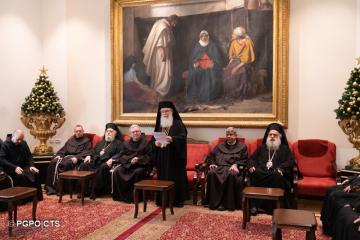 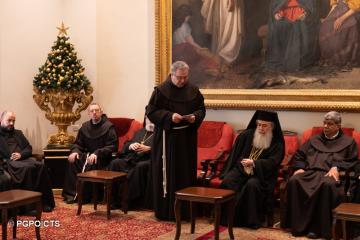 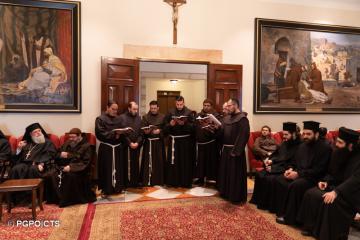 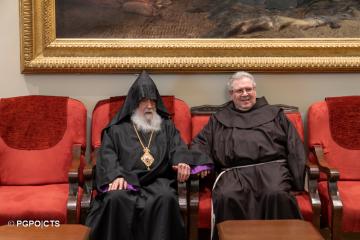 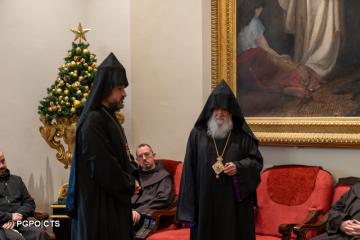 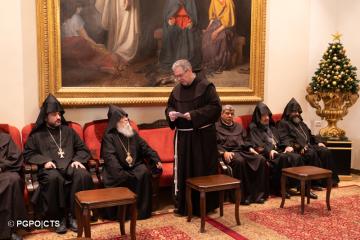 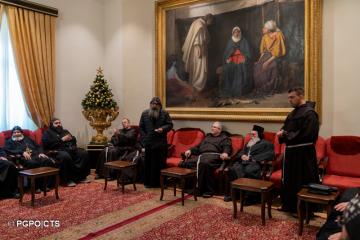 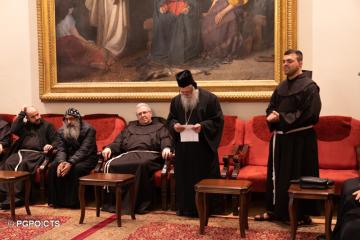 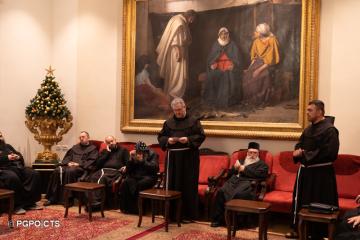 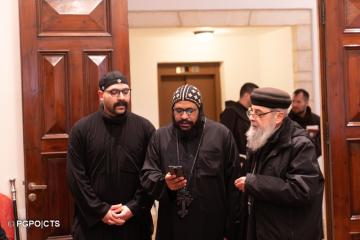 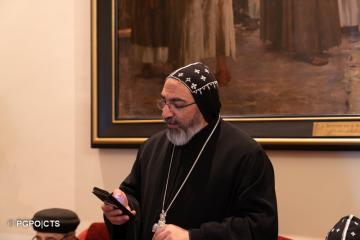 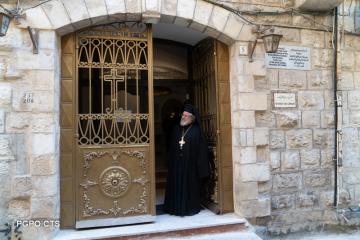 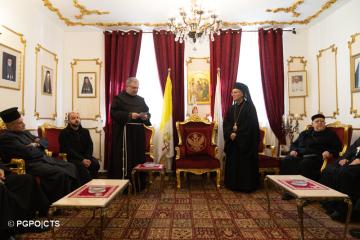 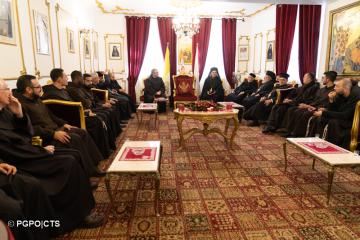 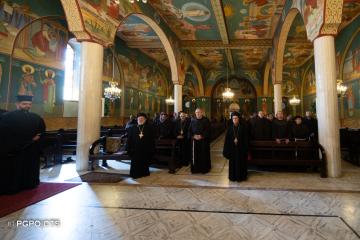 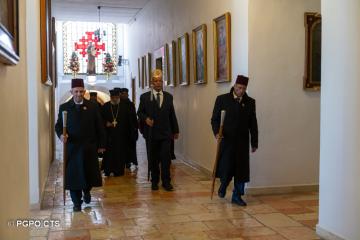 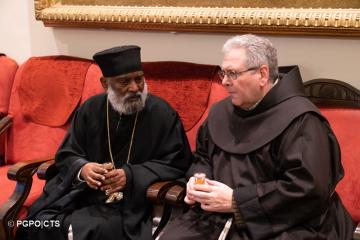 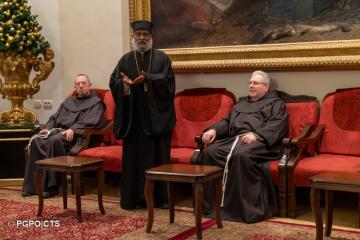 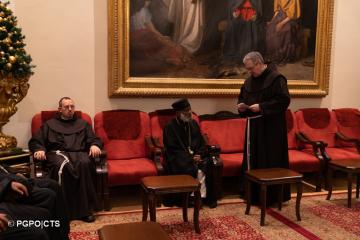 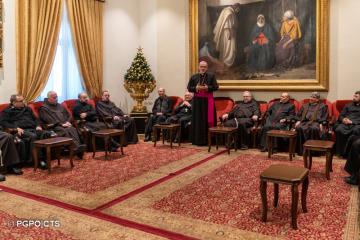 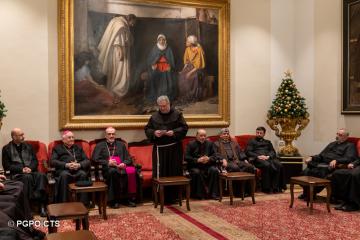 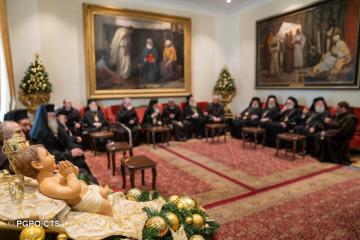 The Franciscans’ Christmas greetings to the Orthodox Churches