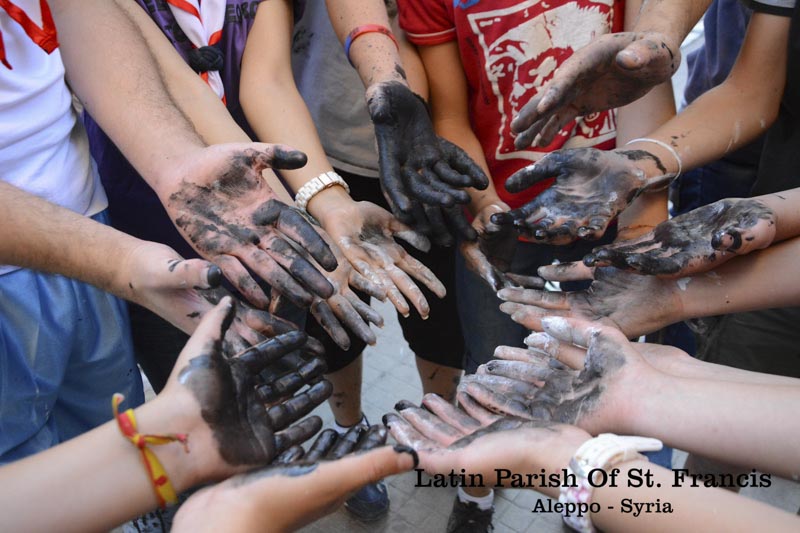 Never have Aleppines found the markings on their sidewalks more beautiful. The Franciscan parish in the large city in Northern Syria decided to restore the city’s colors.
Aleppines could not believe it when on Sunday, June 18, they saw scout brigades repainting their sidewalks for the first time. A little black and white paint was enough to give color to the neighborhood around the parish of St. Francis of Aleppo. A municipal sign indicated to drivers whether they were allowed to park their cars or not. It is the most trivial of things and yet “It is beautiful,” said one passer-by.
“Aleppo more beautiful” is an initiative carried out by the local friars of the Custody with the support of the governor, the mayor and the whole municipality. The program was inaugurated on Sunday, June 18. In front of the parish church, Fr. Ibrahim, the pastor, was surrounded by government officials, brushes in hand, to paint the edges of the sidewalks.

After years of war that literally made the city’s colors fade, making “Aleppo more beautiful” is a concern and a challenge. For the people in charge of the initiative: “It allows us to unite as a single nation, a single family, whatever our religion or convictions... We also thought of this initiative right away as an opportunity to make reparations, to restore this beautiful mosaic-- our society, which has been torn apart… So, we dove in with a lot of interest, love and commitment; [with] love for our martyred city and [with] the desire to promote reconciliation in our wounded, torn society. We are convinced that good is contagious. We do good and spread it, radiate it. War, hatred, egoism, the reign of death will be replaced by peace, charity, solidarity, the common good and the extension of the Kingdom of Heaven.”

The promoters of the initiative invited all of the churches to join them and many groups such as the Christian Scouts, various religious groups and any of the inhabitants of the city who wanted to help. The Latin parish took charge of the financial aspect by buying all of the necessary materials.
In the end, more than 200 people, armed with paintbrushes, buckets and paint, showed great enthusiasm and zeal and set out to conquer the city by embellishing it.
On Thursday, June 22, the work continued. Volunteers were divided into teams, and each team was composed of 10 people with a supervisor. The territory was then divided into sectors that were entrusted to each team.
Despite the gloves supplied to them, many young people seemed to take pleasure in smearing their hands with paint.

The Franciscan friars supported by their bishop, Mons. George Abu Khazen, through this type of initiative, wished to express the desire that they share with the population to rebuild the city. The parish of St. Francis of Aleppo in this way has carried out multiple initiatives. “We believe that with these small actions, these small gestures, we will all be able to rebuild our city and our society together. What matters is our personal commitment, our desire to be doers in the process of repairing our ‘home,’ which is our city with its inhabitants. As a Church, we have great potential that we cannot keep only to ourselves. Our duty, our mission, is to share it, to contribute to the common good of all of our brothers and sisters who share life with us in the same country, the same city, the same society.”
--------
ATS Pro Terra Sancta supports the projects of the Custody in Syria. You can also help them by making a donation online or through other means. Find out more here: