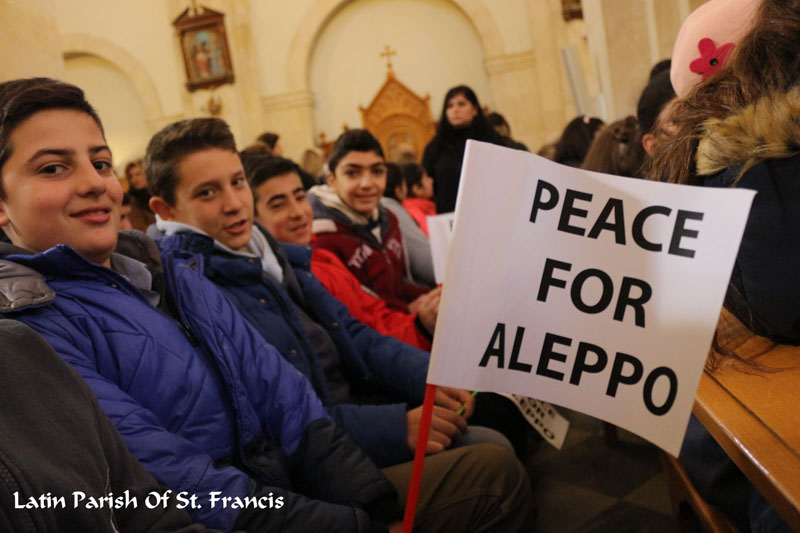 In Italy, Br. Ibrahim Alsabagh presented his book A Moment before Dawn. The Franciscan, who is in charge of the Latin community of Aleppo and who is the pastor of the local church of St. Francis of Assisi, had his book published by Edizioni Terra Santa; it tells the story of his last two hardship-filled years serving the Syrian community. “In the book, bitter stories are recounted, as well as the experience of pain, bitterness and despair of the people in Aleppo because of the war, but at the same time, I've included episodes of joy that took place in this sad environment,” said Br. Ibrahim. There is the contradiction of making a chronicle of facts that are very sad and painful that are read though the light of faith. [My intention] is not to write a history book, but to present an account of the Lord's presence among this rubble in Aleppo.”

The book was presented in some cities of Italy and was welcomed with great interest and participation. These cities included Rome, where the Custos of the Holy Land, Fr. Francesco Patton, was also present. “I immediately noticed that people attentively listening, with great compassion,” said Br. Ibrahim. In Oropa, people would not even get back up because they wanted to keep listening [to him]. I told them about the situation and the living conditions, the political situation, the war and the division in Aleppo, as well as the very difficult conditions that prevent that there be life there today. At the same time, I also told them about our response, which is the response of charity, a charity that knows how to get in touch with the poor and look at them and listen to them with the eyes and ears of our heart, as Pope Francis said; we must be ready now to act like the Good Samaritan through all possible means and to meet to their basic needs.”

Br. Ibrahim is very familiar with the political situation in Aleppo today: “We have arrived at the last intersection of this 'world war in bits and pieces': these are the words of Pope Francis about Syria, and especially Aleppo now. Right now there is the presence of all the international forces. The armed militias present in the East of the city, with about 200,000 civilians, and on the other hand, the West part is controlled by the regular army and the Assad government, where there are 1,200,000 inhabitants. The militias are not giving up, and they do not respect the truce, and they do not accept a reconciliation or reintegration, perhaps out of fear, perhaps out of distrust for the current government, or because of extremist ideas. At all costs, they want to continue bombing civilians in the West part of the city, so as to put pressure on the government and the regular army. On the other side, the army is not giving up: it wants to defend civilians. After so many attempts at reconciliation, the doors are closed and what has begun is a struggle to recapture of all the land in the East. This is not an easy thing, because the weapons used are of great destruction. Some civilians are likely part of the struggle, and sometimes combat happens at a distance of two meters and these armed militias also have sophisticated weapons. They continue launching missiles on churches, houses and hospitals. Aleppo risks meeting the same end as Homs, a city that has become a ghost town full of ruins. People were forced to leave the town. After fighting to the end, the militias left Homs, but everything was already destroyed, and thousands and thousands of people had died. We are risking this same end because there is no place for dialogue and the world is divided. The lack of harmony has reached its maximum, and this is obvious even at UN meetings, and it is visible to the whole world. We see what failed dialogue at an international level means: the division of the world into two camps is slowly becoming evident and the degeneration of the situation not only in Syria, because Syria and Aleppo are just one point in these disagreements. We are risking an unlimited war that does not stop on the outskirts of Aleppo, but that touches the whole world and all of its countries.”

What motivates the friar to keep going in this difficult mission? “Charity urges me,” said Fr. Ibrahim. “Charity gives me, in the words of Psalm 93, the 'strength of a buffalo.' As a father, a pastor, I never even imagined giving of myself in this way, and I could not have imagined that the fruits [of my labor] would become this big and so abundant. Charity pushed me all the way: Christian charity toward the poorest of people, but also the heart of the shepherd who pushes his way through this gift of the priesthood.” A gift of self brought Br. Ibrahim to give up the idea of continuing his doctorate, and instead of traveling to Aleppo, where he has been the pastor since the feast of Christ the King in 2014. “The Custos at that time, Pierbattista Pizzaballa, said 'We need help in Syria.' I responded: 'You said it all. If you say that we need help in Syria, I will be available.' My response was very spontaneous, though I had never been to Syria for any kind of service and I did not know the living situation at that time of great confusion and war.” But for Br. Ibrahim this was not a problem. “Then all of the fruits of our Franciscan presence were seen,” continued the friar.

“We have seen the fruits of meeting the practical needs of the people, of inventing new projects with a tremendous amount of creativity, such as the very vast distribution of water in different ways, the distribution of food parcels to hungry people, in great numbers. We saw fruits in working and acting [almost] like a medical insurance company, in covering all of the expenses of medical examinations, analyses, medicines and expensive surgeries for all of the people who knocked on our door, and in going into the rubble to repair damaged houses, which once again are in danger of being destroyed. We currently have twenty-three projects underway, to serve our Latin community, as well as all Christians of other communities and all of the people around us, our Muslim brothers. and sisters, all suffering people.”

In his book A Moment before Dawn, Br. Ibrahim discusses all of this, through a compilation of letters and messages to give to the world (this was the friar's original idea), along with the witnesses and articles to share stories about suffering, but also hope. “We suffer every type of violence possible, but our answer must be commensurate with this crisis, and it must save the dignity of the human being, through genuine, creative charity, which is Christ's. I realize that we Franciscans are signs of hope. When all of the signs of hope are missing on the streets, between our houses, everywhere in Aleppo, we are called not to seek hope elsewhere, but to give of ourselves, as Jesus said. That is to say that we are to give hope, to strengthen the faith through our actual presence, our own participatory suffering and total surrender to God, by giving ourselves entirely to our brothers.”

In war-torn Syria, at times running away seems like the only real hope of survival. Many wonder why people risk everything, even their own lives, to emigrate. And Ibrahim replied: “When there is no electricity for years, when there is no water for several weeks at a time, when 80 percent of the population is unemployed, and 92 percent of households are poor, when missiles are launched in broad daylight and at night on churches, hospitals, schools and houses, then desperate people start to leave everything behind. They even jump into the sea, into the hands of the pirates, so as to escape from death. There was a young man, for example, who had decided to run away and he informed me the day before doing it. He had no certainty of reaching his destination—the West—but he told me: “Here I am sure to die, but by escaping this world, maybe I will have a small chance of being saved. At least I will have a chance, even if it is minimal, to survive.”

The Franciscan presence can be recognized as bringing something different to the people of Aleppo and Br. Ibrahim experiences this daily: “We, as Franciscans, see the Risen Lord in these ruins of Aleppo, the light of Christ in the midst of darkness. While people look with human wisdom and see that there is no way out, that there is no future, we, through the eyes of faith and divine wisdom, can see the Risen Christ, who is present among His people and who works miracles every day with us. He gives us food, multiplies the loaves and the fishes; there is always a miraculous catch: these are the signs of His presence and His Resurrection in our midst in Aleppo. This warms our hearts and always gives us hope for a better future and that war and hatred will not have the last word. Charity, hope, and peace will have the last word.”