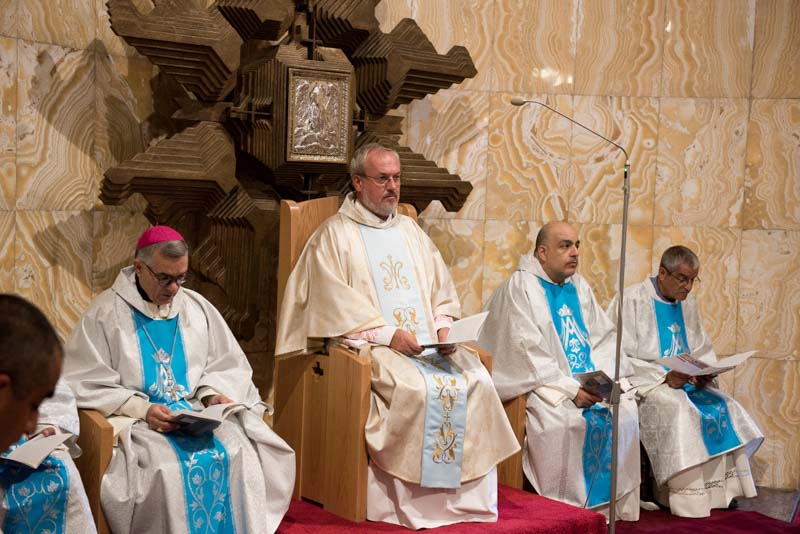 “Most blessed are you among women, and blessed is the fruit of your womb” (Luke 1:42). The Feast of the Assumption began in Jerusalem with a procession in the Garden of Gethsemane.

Close to the tomb of the Virgin, the Apostolic Nuncio Mons. Lazzarotto presided over the vigil that brought together parishioners, religious and religious pilgrims. The first part of the ceremony was devoted to different readings on the life of Mary. Afterwards, the procession began through the olive trees and flowers, finally reaching the Basilica of the Agony. The torchlight procession was brought to life by the Marian hymns that were sung. Finally, the evening ended after a final prayer and the blessing on the congregation. After thanking the faithful who were present, the community of the monastery in Gethsemane offered everyone some ice cream.

On August 15, the solemn mass was celebrated at the basilica in Gethsemane. It was presided over this year by Br. Dobromir Jasztal, the vicar of the Custody, in the presence of Mons. Cesar Augusto Franco Martínez, the bishop of Segovia. The church was filled with pilgrims who came together to pray with the friars. The Liturgy of the Word was proclaimed in Arabic, followed by English, and the Gospel was also sung in Arabic.

In his homily, Br. Ramzi Sidawi, insisted: “We must give Jesus to the world as Mary did by her fiat in accepting the Incarnation of the Word.” Indeed, “Mary has always been united with her son, and even at the end of her life, she could not help but be united to Him.” So, there is still this “union even in death.” “Mary did not give her Son without suffering.” So, we need to pray that “Mary [may] accompany us on the path in order to [receive] her son.” We must follow the example of Mary, who knew how to be humble, and “Jesus exalted Mary, while she put him in a manger,” he insisted. Then, offertory procession by representatives of different religious communities was a highlight of the solemn mass.

At the Grotto of the Betrayal, at 4:30 p.m., vespers were celebrated by Br. Dobromir Jasztal in the presence of the Apostolic Nuncio Mons. Lazzarotto. First Vespers in the Franciscan holy place closest to the tomb of the Virgin. Then, the priests and faithful processed and prayed before the tomb of the Virgin. This was also a high point, because this procession and prayer, as specified by the status quo, is the only day a Latin prayer is authorized at the Virgin’s tomb. Finally, after a final prayer and blessing of the congregation, the community of the monastery at Gethsemane offered refreshments to all of the faithful.