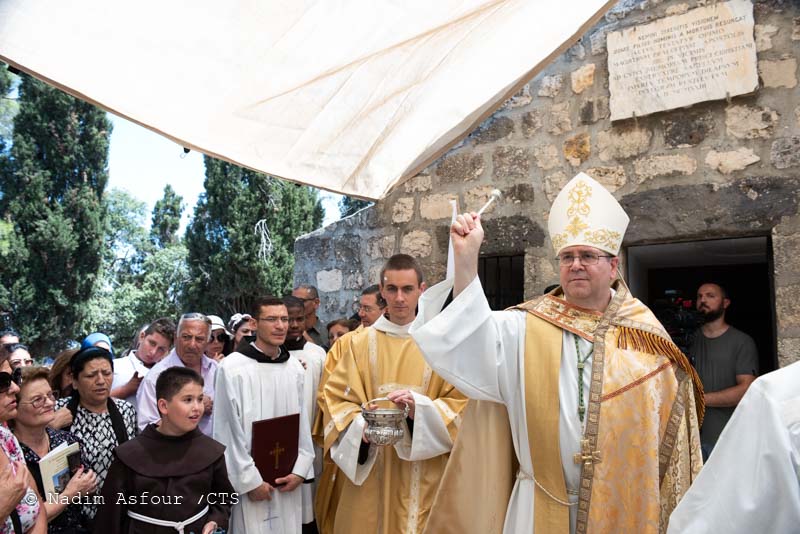 Christians from all over Galilee and pilgrims from all over the world came together to participate in a very special event. For this year’s celebration of the Transfiguration, many came in the night before, as is the local custom. As the Gospel recounts (Matthew 17: 1-8; Mark 9: 2-8; Luke 9: 28-36), Jesus invited Peter, James and John to a side of the mountain and there he transfigured before them, changing their appearance. The Franciscan friars of the Custody of the Holy Land celebrated the solemnity on August 6 at the Basilica on Mount Tabor, where tradition places that biblical episode.

The tradition of stopping and camping out the day before dates back to the Ottoman era, when the friars owned the area, but had the right to go only once a year, for the feast of the Transfiguration. So, they would get there the night before to spend the night with local Christians. On the morning of the next day, the mass was celebrated. Also this year, it was the Custos himself, Br. Francesco Patton, who presided over the Eucharistic celebration. Before leaving, the faithful participated in the procession to the Descentibus chapel. Inside the chapel, located south of the main church, is the place where Jesus ordered Peter, James and John not to speak about the Transfiguration: “Do not tell the vision to anyone until the Son of Man has been raised from the dead.” (Matthew 17: 9).

Mount Tabor rises 450 meters above the plain and 588 meters above sea level. The Basilica of the Franciscans was built in 1924 by the architect Antonio Barluzzi on the site of the Crusader-era Benedictine monastery that was razed to the ground by the sultan Al Malik (1211-1212).