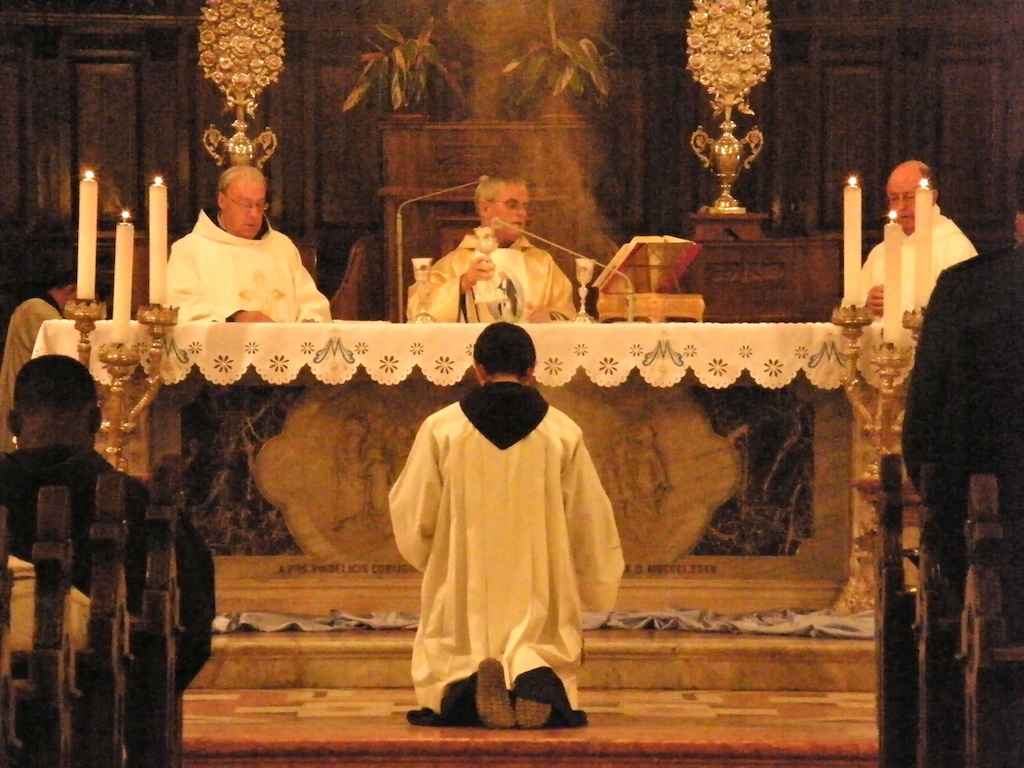 In a solemn yet festive atmosphere, the Holy Mass for Spain’s National holiday and the Feast, celebrated on October 12, in honour of Our Lady of Pilar, the title conferred on the Virgin Mary venerated at the Sanctuary of the Virgin of Pilar in Zaragoza and considered the patron Saint of Spain, was celebrated today in the parish Church of St. Saviour. The ceremony was presided by Father Artemio Vitores, Custodial Vicar, who was joined by the concelebrants Father Emilio Barcena and Father Enrique Bermejo. They were assisted during the celebration by the deacons Fernando Comparan and Jorge Espinoza. Attending the ceremony were the General Consul of Spain in Jerusalem, Alfonso Portabales, with his wife, and the authorities of the Spanish Guardia Civile, whose patron Saint is Our Lady of Pilar. The Franciscan community, joined by priests and religious, mostly Spanish-speaking, friends and faithful of the local Christian community also participated in large numbers.

In his homily, Father Artemio dwelt briefly on the significant anniversaries celebrated today: the apparition of the Virgin Mary to St. James the Apostle (Santiago) and to his disciples in Zaragoza, where the Madonna is alleged to have been transported by Angels and to have given St. James Her Holy image placed in a pillar (Pilar), telling him to build a sanctuary in her honour on that spot; the Spanish National holiday, which coincides with the discovery of America and the start of the history of the New World.

The devotion to the Madonna is deeply rooted in Spanish culture. In 1730, Pope Clement XII allowed commemorating the Feast of Santa Maria del Pilar throughout the Spanish empire and, due to this feast coinciding with the date of the discovery of America, the Virgin Mary of Pilar was later named Patron Saint of the Hispanidad. In 1984, Pope John Paul II also went to Zaragoza to prostrate himself in front of the Holy image of Mary.

All the European nations – Father Artemio continued – are debtors to Christianity in their history and culture, moulded by the great values of the dignity of the person, respect for life, freedom, the family, tolerance and the desire for peace. Many of these values were also transmitted to the inhabitants of the New World, thus forming a sole family united in faith and inspired by these values. The love and devotion for the Virgin Mary also represent a very strong unifying element of these very distant peoples.

In the present-day world, where what Pope Benedict XVI calls the “dictatorship of relativism” is becoming increasingly widespread, Christianity is still capable of offering young people essential values on which to solidly base their personal and social life. These include, in particular, disinterested love, which for every Christian is the fundamental criterion that guides existence and is rooted in the exhortations “Give and it shall be given unto you” and “Love as you have been loved”; education promoting reciprocal comprehension and tolerance; building peace, that cannot be conquered through religious or political fundamentalism, but only through respect for and collaboration with those who are different, as the tradition of encounter and dialogue inaugurated in Assisi 25 years ago teaches; the respect of religious freedom, guaranteeing for each person, without discrimination, the freedom to practice their own faith; the encounter with Christ in our lives, rediscovering the courage to be Christians and proclaim Christ in our countries.

At the end of the Holy Mass, all the participants gathered for a very enjoyable convivial moment in the Divan Hall of the Convent of St. Saviour.