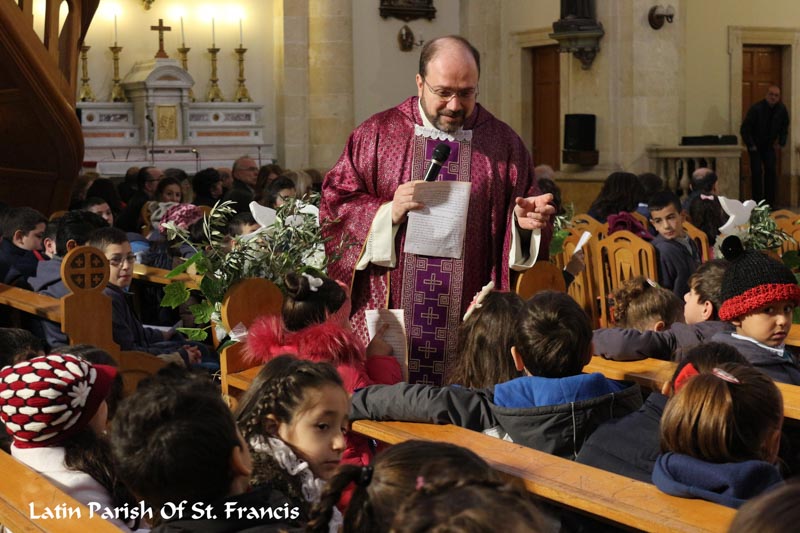 The parish of St. Francis in Aleppo sent us this article directly, as well as the photographs that accompany it. It reveals how the pastor, Fr. Ibrahim Sabbagh, first sent out the his message on November 27, and subsequently, the Minister General of the Order of Friars Minor and the Custos of the Holy Land, Fr. Francesco Patton, made a special appeal to pray for peace in Syria, and in a special way, for the city of Aleppo. (Read Our article: Children praying for peace: Letter from the Minister General and the Custos of the Holy Land.

While outside, bombings and rocket fire can be heard, in our parish church, over a hundred children prayed the prayer of St. Francis: “Lord, make me an instrument of your peace,” all while waving white flags with the words “peace for Aleppo.”

The inspiration for this initiative entitled “Children praying for peace” began here. It was soon embraced by the Custos of the Holy Land, Fr. Francesco Patton, who transformed it into an invitation made by the Custody of the Holy Land and the Order of Friars Minor to the whole Church throughout the world and to all of the people of good will, to organize moments of prayer for peace on the first Sunday of every month.

The aim is to intensify efforts to end the war and the suffering of the civilian population, the most vulnerable of whom are children. Some of them know no other life than war. Some were born under constant bombings. They suffer from enormous psychological trauma, malnutrition, lack of water, electricity and adequate medical care, as well as cold and hunger. Their faces struggle to smile. The suffering comes through their frightened eyes. For years they have been living in anguish. They wake up to the rumble of explosions, bombardments and the launching of rockets. You never know where they are going to fall but it is always to the detriment of civilians, without any distinction.

At the beginning of the Eucharist, the children carried a candle to the altar – a sign of our communion with all of the people all over the world who remain united with us in our prayer for peace. During the procession of the offerings, they presented all of their suffering to the Lord, expressed through symbols. By placing them on the altar, they asked Jesus to turn their sorrows and sadness into hope.
The toys, balloon and butterflies symbolized their childhood, their innocence and also the most expensive thing that they possess. They offered it to the Lord in the midst of war, destruction and violence.

From the debris from a rocket, they made vase filled with flowers, a symbol of their pain caused by the death of their relatives and friends in the war, of their fear of the rockets that threaten their lives and the lives of their loved ones. This is a symbol of a form of pain that is transformed into an offering for the Lord. This is a symbol of forgiveness that comes from hearts that are filled with the Holy Spirit.
On a red background, lit by candlelight, they had written the name of “Aleppo,” their beloved city torn apart by war, of which a large part of the population is [now] displaced. A globe with a dove flying over it represented their prayers for peace in Syria and throughout the world—the same peace, whose absence causes so much suffering.

Next to the altar, a poster on which a bloody hand had been drawn read “Stop the war.”
At the end of the celebration, the girls mimed a song as if to raise their prayers to God: “May the Lord give peace to our country and to every person in the world.

All the songs during mass called for peace. With the children, we seek to be ambassadors of forgiveness. This is the attitude that Jesus teaches us by his example. He who forgave his killers. Every time we gather, we also pray for those who strike and kill. Forgiveness alone is not enough. Justice and dialogue are also very important, but when all of that was possible does not succeed, only prayer is effective and it must be our only weapon.
On Sunday, with the children, we invoked the Spirit of God on the leaders of nations for peace not only in Syria, but throughout the world. We are convinced that the Lord hears the cry of his “little ones” and the prayer of these “little ones” in the world will become an opportunity for reflection and conversion for “the big .”
For the first time, we were able to broadcast this mass live on our parish page: https://www.facebook.com/latinparish.aleppo/

We thank all those who joined us in our prayers on Sunday, December 4, and all those who shared their initiatives on our “Children praying for peace” page:
https://www.facebook.com/st.francis.parish.aleppo/

We invite you to join us on the 1st Sunday of next month; January 1, 2017, the World Day for Peace