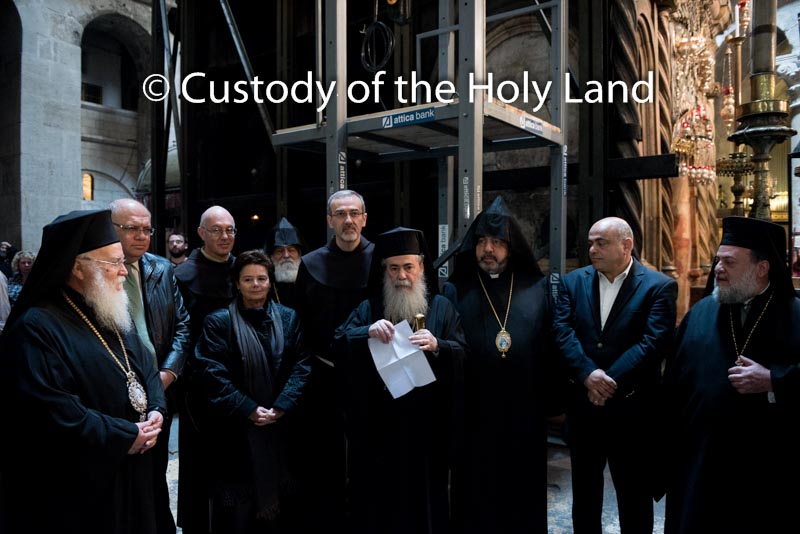 The pilgrims present at the Holy Sepulcher on the late morning of Tuesday, March 22, may be wondering what kind of ceremony they attended. Greek Orthodox, Armenians and Franciscans gathered for the blessing of scaffolding!

The churches of the Holy Land, guardians of the Church of the Resurrection, have worked in utmost secrecy in recent months in order to carry out feasibility studies for the restoration of Christ's tomb. It is no secret, however, that this tomb in the center of the rotunda of the Holy Sepulcher, is in a dilapidated state.

This work and these consultations resulted in a conference in early March in Athens that was attended by various ministers of the Greek government, the Greek Orthodox patriarch of Athens and Jerusalem, Theophilos II, the Custos of the Holy Land, Pierbattista Pizzaballa, and the Armenian Patriarch Nourhan Manougian, as well as around a hundred guests.

At the meeting held in Athens, Professor Antonia Moropoulou, of Chemical Engineering School of the National Technical University of Athens (NTUA), presented the results of the study that she led on the state of the building. She had the help of several other Greek scientists due to the fact that the study is multidisciplinary.

Professor Moropoulou presented the structural defects of the building dating back the construction itself. But she also stressed that some contemporary factors are also contributing to the overall weakening of the structure. One of the main factors is the significant number of visits to the basilica by pilgrims and tourists.

The main cause of the distortion of the marble blocks between them is the alteration of the mortars. This is the result of increased moisture from the condensation of visitors' breath. In addition, the thermographic study of the southern part of the shrine has shown that the use of candles, which burn for hours, just a few centimeters from the structure, if they do not actually touch the shrine itself, have led to a great deal of thermal stress to be placed on the marble. Moreover, the fumes that are released, have led to a buildup of black and oily deposits that deteriorate the marble but that also set up the conditions for physicochemical reactions, which accelerate the oxidation and deterioration of the architectural surfaces.

Scaffolds were brought out immediately. The work will begin after the conclusion of the Catholic Easter celebrations but could begin right after the Orthodox holidays.The restoration work could begin as early as the next few weeks. It is expected to last at least eight months, and it should be completed by early 2017, 70 years after the British laid down a metal frame on the shrine. All of the work will be documented little by little by thirty professors from various NTUA departments. Both Catholic and Armenian experts will also be part of the team.

During this time, the holy place will remain open to the faithful for worship and devotion.

The agreement reached between the churches is to proceed to a conservative restoration. The shrine will therefore be dismantled the shrine and then rebuilt identically. Only parts which are too fragile or broken will be replaced. The marble that can be preserved will be cleaned, and the structure that supports it will be consolidated.

The project is funded by the three main Christian denominations of the Holy Sepulcher: the Greek Orthodox, the Franciscans and the Armenians. The Greek government will also publicly fund it, as well as private benefactors. In addition, the World Monuments Fund (WMF) has shown interest in participating.

The shrine is 206 years old

Built in 1809-1810, after the great fire of 1808 that damaged the whole building, the current shrine, in an Ottoman Baroque style, quickly show signs of fragility. Until 1868, the dome of the rotunda only partially protected it from the weather since it there was an oculus overhead that was open to the sky. However, the main issue was that the shrine quickly began to sag because of its own weight.

What might look like a design flaw, is really the result of an issue that the Greek architect of , Nikolaos Komnenos, had at the time to conserve the vestiges of previous shrines. Marble plates were therefore placed on the cover. “Onion-peel thing,” said Martin Biddle in his reference book entitled “The tomb of Christ” (1). Built in a fragile way on an unstable structure, it goes without saying that the strong earthquake of July 11, 1927, would only make matters worse.

The basilica had withstood the high intensity tremor (6.2 on the Richter scale). The only visible damage was in the cupola above the Greek Orthodox choirs, which was severely cracked.

Since Palestine was under British rule, the engineers of the Department of Public Works (DPW) took two months to get religious authorities to make an inspection. Their conclusions were without appeal on the basilica's overall need for repairs. The survey of the tomb that they carried out confirmed that its structure enclosed the remains of the previous building.

However, at the time, the churches were not been able to reach a satisfactory consensus. Weather and new seismic activity, particularly in 1934, continued to wear and tear the building. The largest church in Christendom became a forest of scaffolding that now supported its very fragile walls. The Greeks and the Franciscans, on behalf of Latins and Armenians, proceeded to carry out certain repairs but not one of them touched the tomb.

But in March 1947, the British forcefully encircled the shrine with steel beams, on which one can still read “Bengal Steel Company.” They did not have time to obtain the support of the churches to go on with the restoration. The British mandate ended in May 1948.

In 1959, the three main Christian denominations (Greek Orthodox, Latin and Armenian) had coexisted in the Basilica of the Resurrection were in agreement to carry out a major restoration project. Each church undertook major works for its respective area, and they all worked on the restoration of the dome of the rotunda. The work ended in 1996, but the tomb, was untouched and remained in the same dilapidated state.

This is what is finally being repaired.


Different shrines throughout the ages

Jesus' tomb was dug out of a hillside, in an unused quarry. But the garden of the resurrection and the tomb were buried starting in 135, underneath the temple that was erected by the Emperor Hadrian. It was in about 324 that the Emperor Constantine asked Bishop Macarius of Jerusalem to find Christ's tomb and to build a basilica in its location. This was the first church of the Holy Sepulcher.

They dug around the burial chamber, where Jesus' body had been laid, so as to free up some space. This original boulder was covered with marble and with Constantinian décor. This was the first shrine.

Partially damaged by the Persians in 614, and then looted and razed to the ground in 1009, following the orders of Al-Hakim bi-Amr Allah, known to Christians as the Hakim the Fool, this tomb was replaced by a Romanesque shrine around 1014.

This construction, in turn, showed signs of fatigue, the same factors causing the same effects: bad weather, fires and looting, and so it was replaced in 1555 by a construction that was similar to the previous one but it was marked by Gothic influence. This was the shrine erected by the Custos Boniface of Ragusa that did not survive the fire of 1808 and that was replaced by the current one.