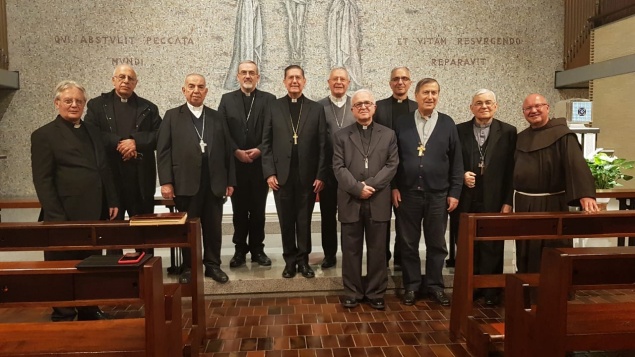 ROME – The 70th Plenary Assembly of the Conference of Latin Bishops of the Arab Regions (CELRA) took place at the Instituto Maria Santissima Bambino, Rome from February 17-20, 2020. Among the topics discussed by the bishops of the regions, led by the pro-president Archbishop Pierbattista Pizzaballa were the documents “Human Fraternity”, the Exhortation “Querida Amazonia”, a proposal of a World Youth Day from the Arab regions, and the approval of the update of the Arabic-language liturgical texts.

The meeting opened Monday afternoon, February 17, with a positive moment of sharing, when each of the 13 members offered an overview of the social and pastoral situation of their country and diocese.

The following morning, the CELRA bishops began the day celebrating the Mass presided over by the Holy Father, Pope Francis at Domus Sanctae Marthae, at the end of which each one greeted the Pontiff and exchanged some words with him.

At the beginning of the discussion, the content of the recent post-Synodal Apostolic Exhortation “Querida Amazonia”, and the four dreams[1] that he expressed in the document, were treated. The session was presided over by Cardinal Michael Czerny, undersecretary of the Migrants and Refugees Section of the Dicastery for Promoting Integral Human Development.

The next topic on the day’s agenda, presented by Archbishop Pierbattista Pizzaballa was an analysis of the guidelines for the concrete application of the Motu proprio Vos estis lux mundi, which contains procedural norms for combatting the phenomenon of abuses in the Church.

In the afternoon, Cardinal Guixot, President of the Pontifical Council for Interreligious Dialogues, and overseer of the session revealed to those present the revolutionary character of the “Document on Human Fraternity for World Peace and Living Together”, having entered the delicate phase of its reception. The document was signed by Pope Francis and Muhammad Ahmad al-Tayyib, the Grand Imam of Al-Azhar, one year ago, during the apostolic visit of His Holiness to the Arab Emirates. Since this document is intended to have universal reach, its reception will influence future social, political and religious relations on a global level.

On Wednesday, the topics on the day’s agenda assumed a more local character, treating matters that concern the Middle East specifically. The first part of the day discussed the opportunity to have a World Day for Youth that brings together the youth of the Arab regions only, to encourage massive participation according to criteria of nearness. Jordan was proposed as the host country for the Christian youth of the Middle East, for the meeting that will be called World Day of Youth of the Arab Regions. After lunch, the bishops were asked for a further opinion on the linguistic updates of the Arab language liturgical texts.

Following this, Cardinal Beniamino Stella and His Excellency Josè Rodriguez Carballo dealt with the sometimes very delicate relationship between the local Ordinary, diocesan and religious priests, concluding that it should be inspired by principles of mutual respect, where the Bishop is called to accept and welcome religious communities while the latter are held to collaborate loyally with their local bishop.

In the evening, the bishops received the welcome visit of six priests of the Latin Patriarchate who are living in Rome for reasons of study or work – Msgr. Khaled Akhasheh and Fr. George Ayoub, both of whom are employed at the Vatican’s Pontifical Council for Interreligious Dialogue; also Fr, Humam Khzouz, Fr. Bashir Bader, Fr. Wissam Masa’adeh, Fr. Tarek Abu Hanna.

Archbishop Pizzaballa had then to leave the assembly’s work to travel to Bari and participate in the meeting “The Mediterranean, Frontier of Peace”.

The following day, His Eminence Cardinal Lorenzo Baldisseri dealt with the topic of “Synodality in the praxis of the Church” exhorting the overcoming of every form of individualism and clerical authoritarianism in favor of a more intimate and effective collaboration at every level, from the parish to the diocese, thus working “as Church.”

The second session of the morning was presided over by H. E. Paul Richard Gallagher, Secretary for Relations with States, who reviewed the diplomatic dynamics of the Holy See in its relations with other States.

The meeting ended on Friday afternoon, February 20, with a series of discussions that touched upon diverse subjects: the International Eucharistic Congress in Budapest, which will be held in September of this year; the next Global Compact on Education in Roma; the proposal of Poland’s Episcopate to count St. John Paul II among the doctors of the Church. In closing, the appointment for next year’s meeting: Lebanon was designated as the next host for the Conference of Latin Bishops of Arab Regions in February 2021.

H.E. Camillo Ballin could not be present due to an indisposition, which hopefully will be resolved soon.