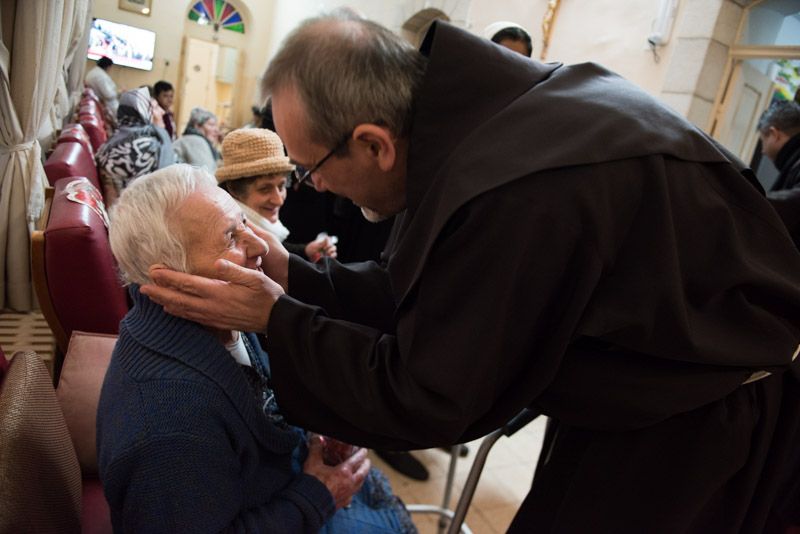 On Tuesday afternoon, on January 5, the Custos, Br. Pierbattista Pizzaballa and the secretary of the Custody, Br. Sergio Galdi, left St. Catherine's Church after vespers. The program included visits to the Bethlehem communities who work with the Franciscans. They were accompanied by the main actors in this collaboration, Brs. Nerwan Al-Banna, Badie Elias and Luai Bsharat, who are in charge of the parish. This friendly and informal visit allowed them to exchange vows, catch up and discuss ongoing projects. All of this was naturally accompanied by chocolates, liqueurs and coffee!

First, came the perpetual adoring sisters of the Blessed Sacrament, who pray at the Franciscan sanctuary of the Milk Grotto. “The year 2015 was harsh, but without your prayers, it would have been even worse,” stated Br. Pierbattista. Part of the community will move to the convent at Emmaus el-Qubeibeh as soon as they are able to raise the funds needed for some repairs. The Franciscan Missionary Sisters of Mary are in charge of the Franciscan Boys' Home and the Dominican Sisters are responsible for a children's nursery and a Sunday school were up next. Switching between Italian, French and Arabic, the friars were welcomed as friends, and language was no barrier. The recent release of Br. Dhiya Aziz, the situation of Christians in the Middle East and news from every community, were hot topics of conversation.

They then went to see the parish's Boy Scouts, whose leader is Br. Luai. Selfies, speeches and cakes were in order. “When I see the Pope next month,” the Custos said to them, “I'll tell him that Christianity in the Holy Land is not even close to fading away, because there are young people like you, who are standing, who believe.” They then proceeded to the Antonian Society, which is in charge of a home for the elderly, and they gave out chocolates there. The friars come to celebrate daily mass there regularly and they organize activities and small concerts, with youth groups such as the Scouts. It was already dark when they arrived at the Caritas Baby Hospital, where it is the mission of the Franciscan Sisters of St. Elizabeth to serve the only pediatric hospital in Palestine. The Franciscan Missionary Sisters of the Immaculate Heart of Mary, who serve children from the Aida refugee camp and the Sisters of St. Joseph of the Apparition, who manage the Terra Sancta School for nearly 1,000 girls, welcomed the friars in the late afternoon. And the friars' visits for the day concluded at the Catholic Action sports complex.

The obvious bonds and friendships between the friars and the different religious communities are based on the same desire to serve God and the people —both Christians and Muslims— in Bethlehem. This is a huge mission, for which our prayers are never in excess.