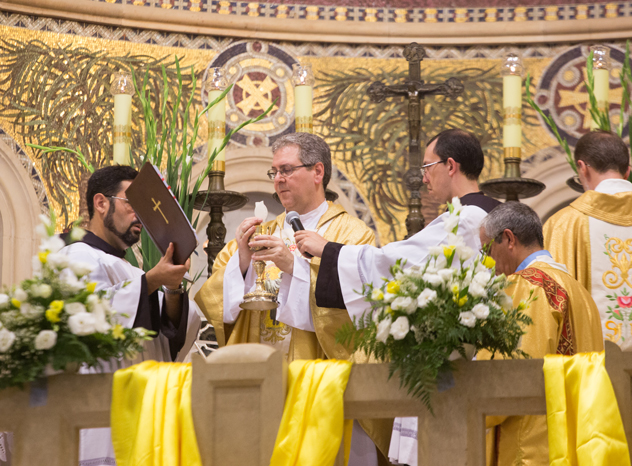 A third-century tradition identifies Mount Tabor as the place where Jesus led Peter, James and John, and where he was transfigured under the three disciples’ gaze.

Each year, on the evening of August 6, Christian families from Galilee took their seats at the sanctuary. Tents were set up for barbecues to the rhythm of the music, and everyone had a good time while children played outdoors.

In the morning, at 5:30 a.m., the first mass for the feast was celebrated in Arabic. As soon as the mass ended, some faithful began to leave the mountain.


At 10 a.m., the faithful from various parishes in Galilee, Palestine, and pilgrims from around the world took their spots. Thirty minutes later, the basilica was packed for the beginning of the solemn mass. It was presided over for the first time by Fr. Francesco Patton, who has been the Custos of the Holy Land for two months.

“In this setting,” Br. AmjadSabbara, OFM, began the Latin pastor of Nazareth, “Peter, James and John had a unique experience…the experience of God's Kingdom on Earth. Here Christ showed his divinity in his human flesh,” he continued,“so as to demonstrate that the prophecies are being fulfilled, and he was transfigured in the presence of Moses and Elijah... It is precisely the fulfillment of the law and prophets that now allow every human being to reach heaven.”

“What the disciples saw here can be experienced by each one of us,” he recalled. “Listening to the true voice, the voice of God speaking to us in daily life by the Holy Gospel, the voice of Hope, beyond the troubles of our lives, we are creating a living witness; this is our transfiguration and God’s Kingdom on Earth.”

At the end of the homily, on behalf of the Father Custos, Br.Amjad offered condolences to the family of the deceased Fr. Faisal Hijazin, who passed away this week and was buried on the day of the Transfiguration in Amman.

The faithful then participated in the procession toward the chapel of Descentibus. Located at the entrance of the sanctuary, it commemorates the place where Jesus asked Peter, James and John to keep the [Transfiguration] episode a secret. The Custos blessed branches from the mountain, which were distributed to the congregation. Everyone was then invited to a hearty meal, prepared and served by the youth of Mondo X, the community that is in charge of the Casa Nova.