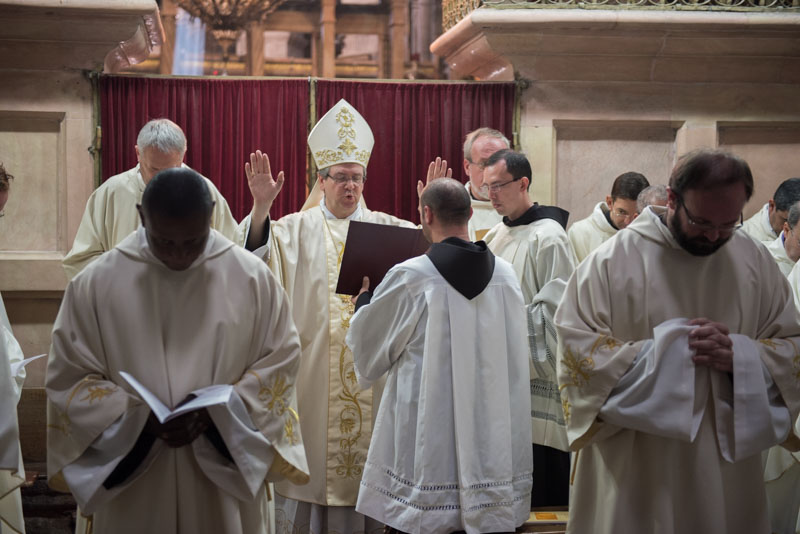 On Friday, July 15, which coincided with the eve of the closing of the chapter of the Custody, the Custos accompanied by most of the Chapter friars, presided over a celebration commemorating the dedication of the Basilica of the Resurrection

The celebration took place in a narrower space than usual: the barriers and scaffolding around the tombs, which were installed for the duration of the work, forced the assembly to gather closely around the altar.

This dedication dates back to 1149, when the Crusaders consecrated the altar and sprinkled the basilica that they had to rebuild with holy water. But this solemnity is not a tribute to the glory of the Crusades. This is a commemoration that brings all Christians together in this place which has become the center of the world through Christ.

In his homily, the Father Custos emphasized that this place is “the extreme point of Christ's lowering” to the death, but “it is also the place of the resurrection,” he insisted. Since this event, which “changes our whole life,” we must “live our our lives as baptized, as friars, and as friars belonging to the Custody of the Holy Land in a new way,” he continued. According to the Gospel, the resurrection is “victory over death and corruption,”said the Custos, emphasizing the last word. “How can I think about my personal interests when Jesus gave up his life? [...] Or how can I think about my own pride? [...] or my own status”: words that recall the humility that is inherent to the original spirit of the Friars Minor, who have a particular kind of resonance when the Custody ends its chapter. The friars are sent or confirmed on their missions all over the Levant. “We must do this because that is why we began here eight centuries ago,” that is to say, that they must carry out the Franciscan mission of the Custody, concluded the Custos. In fact, St. Francis of Assisi himself, who obtained for his brothers the right to come and live peacefully in the Holy Land, opened up for them the path toward Jerusalem and the holy places, in order to help spread the presence and values of Franciscan and Latin christianity.

Instead of Christ's burial and his victory over death, the friars' prayers focused on current events. “We direct our intentions to France and to the victims of the attack in Nice, which left more than 80 dead yesterday. Remember the dead, the wounded and their families,” said the Custos, Br. Francesco Patton, at the beginning of his homily. “We pray that everyone's heart may remain open to peace,” he added.

Later in the morning, during a short private celebration at the Latin Patriarchate, H.B. Fouad Twal officially left his office, to his successor, to be chosen by the Holy See, Mons. Pierbattista Pizzaballa, who was appointed apostolic administrator.

The evening before, the latter had returned for the first time to Saint Savior's in order to visit the friars who had come together for the chapter “in dark trousers and in clerics,” as noted in the chapter's blog.
Mons. Pizzaballa concluded the series of visits during this important time for the Custody, which will complete its work today and will conclude tomorrow with a prayer before the empty tomb at the Basilica of the Resurrection.