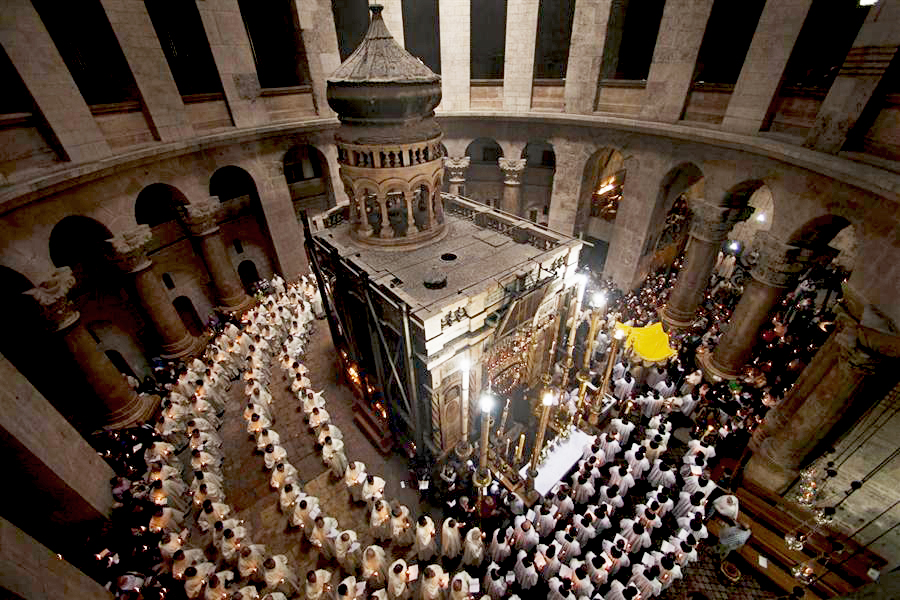 On Monday, October 15, 2012, the directive of the Assembly of Catholic Ordinaries of the Holy Land (AOCTS) was published, in regard to the celebration of Easter, according to the Julian calendar. The documents states that in two years, all Latin and Eastern Rite Catholics of the diocese of the Holy Land will adopt the Julian calendar (followed by the Orthodox), after the preparation of the final decree and its approval by the Holy See. The directive leaves to the Bishops of the various Catholic Churches the freedom to choose whether to start the experience in 2013 or begin in 2015.

The Latin Patriarchate of Jerusalem, in the person of the Patriarch His Beatitude Fouad Twal, has invited all priests of the Diocese of the Holy Land (i.e., Palestine, Jordan, Israel and Cyprus) to adopt the Orthodox calendar. Therefore, Easter will be celebrated May 5, 2013, with the exceptions of the Jerusalem and Bethlehem regions, because of the “Status quo”.

With regard to the other Churches of the Holy Land, His Excellency Elias Chacour, Archbishop of the Greek Melkite Church, invited the priests of his diocese in Galilee to follow the Julian calendar for Easter 2013. In contrast, His Excellency Moussa El-Haj, Maronite Archbishop of Haifa, said that the Maronite Church would follow the calendar of the Maronite Patriarchate of Lebanon, and thus, celebrate the upcoming Easter according to the date of the Roman Catholic Church.

In the past, several Catholic parishes in the Diocese of the Holy Land have experienced the unification of Western and Eastern Easter with much success, considering that many families are made up of mixed marriages between Catholic, Orthodox and Protestant. The difference in the calendars used by the Catholic Church (which follows the Gregorian calendar) and the Orthodox Church (which follows the Julian calendar) prevents members of mixed families to celebrate Easter on the same day. The difference dates back to the Council of Nicaea (325 A.D.), at which time the Churches agreed that the Easter was to be celebrated on the Sunday following the full moon (14 Nisan) after the vernal equinox. As we read in the Catechism of the Catholic Church, “Because of different methods of calculating the 14th day of the month of Nisan, the date of Easter in the Western and Eastern Churches is not always the same. For this reason, the Churches are currently seeking an agreement in order once again to celebrate the day of the Lord’s Resurrection on a common date(Cf. CCC 1170).

Concerning Easter 2015 and following, a decree will be submitted by the AOCTS to the Holy See for approval. It should establish the final adoption of the Julian calendar for the celebration of Easter, by all the Catholic Churches of the Holy Land, “resulting in the adapting of the liturgical calendar for the beginning of Lent and the Feast of Pentecost.” This is what we read in the Directives of the AOCTS, which states, “This decision will be accepted, respected and implemented by all Catholics of Eastern and Latin rites, as well as by all the foreigners living in our diocese.”
In 2014, the moon will be “ecumenical”. Therefore, the Catholic and Orthodox Churches will celebrate Easter together on April 20th.