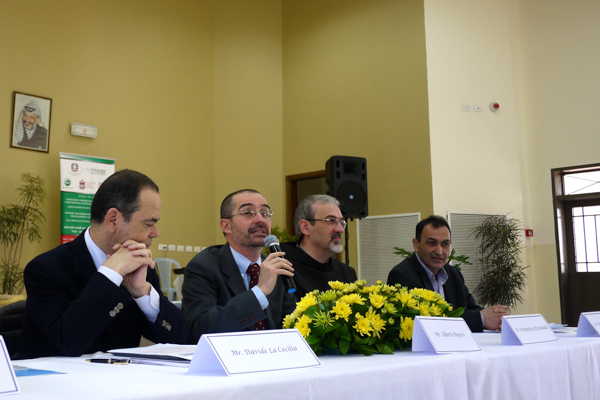 “We all are in agreement in considering education to be a key factor in promoting dialogue, but how can this statement be transformed into something which is concrete and systematic?” An initial answer has been given to this simple yet crucial question from Fra Pierbattista Pizzaballa, Custos of the Holy Land, through the project entitled “Supporting emergency education in the Palestinian Autonomous Territories of Bethlehem, Jericho and East Jerusalem.” This project has been promoted by the ATS pro Terra Sancta and AVSI, with funding from the Italian Ministry of Foreign Affairs’ General Management of Cooperation and Development (DGCS).
Begun November 1, 2010, this project ended this past February 28th, with a final ceremony at the Terra Santa School in Jericho. Present at the ceremony were: Alberto Repossi, Project Manager of AVSI; Fra Pierbattista Pizzaballa, Custos of the Holy Land and president of ATS pro Terra Sancta; Davide La Cecilia, Consul General of Italy to Jerusalem; Ali Zeidan, Minister of Education for the Palestinian government; and Giampaolo Silvestri, executive director of AVSI. The project involved 14 private schools and other public institutions: four in East Jerusalem, five in Bethlehem and five in Jericho, including both primary and secondary schools. It also furnished scholarships for the University, as well as formation programs for teachers, social workers and parents, for a total of 109 formation sessions for teachers, 136 activities for students, 19 laboratory sessions for parents, with an increase of extracurricular activities of students and in scholastic attendance of the most disadvantaged children.
This undertaking has benefitted 6,739 students, of whom 515 are children with disabilities, furnishing scholarships each year to 532 students. Not only were the children involved, but also 1,495 teachers and 784 families, thus interpreting fully and inclusively the concept of education.
The experience was a success, thanks to the collaboration of various organizations – such as ATS pro Terra Sancta and AVSI – in creating a network which, as the Custos underlined, will continue its educational mission in a context wherein the high school attendance rate, as in the Holy Land, does not exceed 65 percent.
The educational ideal of this project emerged clearly during the round table discussion presented by Luca Montecchi, head of the international department of the Fondazione Sacro Cuore; Terry Durnnian, head of the sector for Development at UNICEF; Diana Daaboul, head of the department of Special Education of the Arabic society; Gloria Nasser, social assistant at the Terra Sancta St. Joseph School in Bethlehem; Luisa Cogo, responsible for the Company of Foreign Educational Works; Osama Hamdan, director of the Mosaic Centre Jericho; and Carla Benelli, coordinator of the cultural activities of ATS pro Terra Sancta. The last two presented material on the value of the beauty and art of the mosaics in the Holy Land, the object of study and direct experience by many youth involved in the project, as an extra-curricular activity.
To educate with the goal of introducing one to the whole reality, according to the teaching of Don Luigi Giussani and of the Franciscan school, valuing the talents and critical abilities of the students, and involving families and teachers in an on-going process which has as its goal the discovery of self, with the exclusion of no one. It is a mission which considers the school as the center not closed in on itself, but open to the world, and to other elements in play in the educational process of youth, in light of forming future leaders in dialogue, making of the school bridges to peace. The initial undertaking has proved successful and was made possible thanks to the contribution of many who donated. It is to be hoped that they can continue to support us in this journey to guarantee peace in the Holy Land.