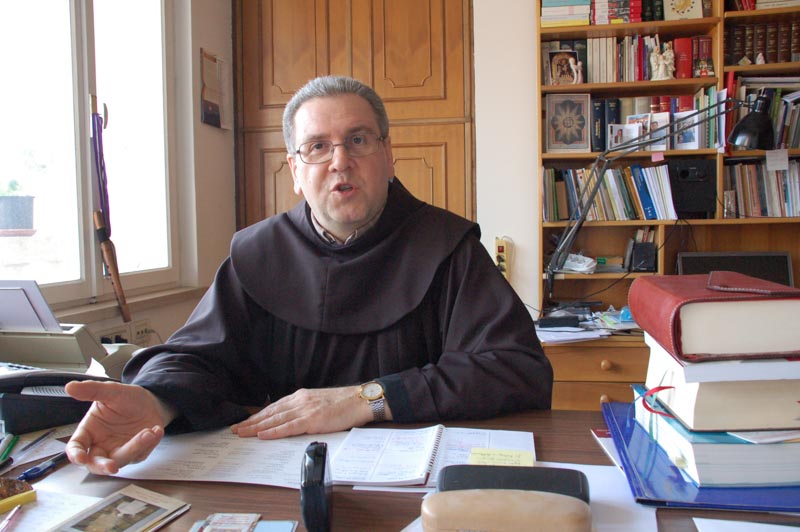 Father Francesco Patton a few days before leaving Italy for Jerusalem. (photo G. Caffulli)
In a few days, the new Custos of the Holy Land, Francesco Patton, will be officially received in Jerusalem and then at the shrines. Here are some of his reflections at the start of his ministry.

On Monday 6th June the new Custos of the Holy Land, Father Francesco Patton will make his official entrance into Jerusalem. He will be received in the afternoon at the Jaffa Gate, one of the entrances in the walls of the Old City, and will reach the Curia of the Custody at St. Saviour in a procession. The solemn reception at the Basilica of the Holy Sepulchre is scheduled for Tuesday 7th June; the next day at the Cenacle, on the Christian Zion (the Custos has the title of Guardian of Mount Zion, in memory of the first and historic seat of the Custody of the Holy Land). On 9th June a similar ceremony will take place at the Basilica of the Nativity in Bethlehem, on 11th in Jaffa and on 18th at the Basilica of the Annunciation in Nazareth.

These hours which separate him from the start of an important and delicate appointment, such as that of the Custos of the Holy Land, are marked for Father Francesco, born in 1963 in Vigo Meano (Trento), by “trepidation” but also by “confidence”.
“In the past few days,” he explains, “I have spoken of trepidation and I think it is the right word. However, I also have great confidence, because I believe in the value of obedience and so I believe that the will of God passes through very concrete human mediations, such as the willingness to take up this service as requested by the Order.”

He continues: “I realize very well that what I am being asked is something that goes well beyond my strength and abilities, I come on tiptoe and in humility, aware that I have to listen and learn. If there is one thing that has really given me pleasure in the past few days, before I arrived in Jerusalem, it was not the headlines in the papers or the congratulations, but the messages from many simple people who have ensured support in their prayers and also the many friars who have written to me from the Holy Land: “We are waiting for you and we are praying for you.” Including the brothers of Syria, who although they are living in a situation of dire suffering, have encouraged me and offered me support with their prayers.”

The service to the Holy Land that Father Francesco has been summoned to take up is on a path that the religious considers, in the light of the faith, almost natural. “For me, living in the Holy Land means returning to the concreteness of the Franciscan charisma. Francis, who was a practical and concrete man, as befits the merchant’s son he was, returned transformed from his experience in the Holy Land. Some indications from that pilgrimage which are still fundamental today in relation to the missionary experience went into the Regola non bollata. We are called “not to quarrel or argue” and to adopt a minority style in any context where we are summoned to live. “Confessing” then to being Christians through service to our brothers and “announcing” Christ when we see that this will be appreciated by the Lord. Using intelligence in dialogue that allows us to understand when the heart of our interlocutor is ready to welcome our announcement. These features of the Franciscan charisma are indissolubly linked with the experience of the Holy Land.”

Father Francesco Patton speaks of the situation of the Holy Land today, marked by deep conflict, as of “God’s wager”. “I believe that the fact that when God chose to become incarnate, He did so in the Holy Land has a meaning,” he specifies. “The history of this land is marked by disputes and conflicts. The fact that God chose to become incarnate here seems really seems a wager. Almost as though to say: if peace and justice can come about here then it is possible that they can reign over the whole world. We are all called to go and stay in the Holy Land, knowing that we are part of this “dream of God”, that is, it is possible that “the wolf will graze together with the lamb”, as Isaiah’s vision tells us. And that a time will come, as the prophets say, “of new skies and a new land.” We have to believe that all this will happen, because it is also our lack of faith that prevents God’s projects being realized.”

The first period of his appointment – and Father Francesco is certain of this – will be a sort of “novitiate”. “I do not have the presumption of being able to immediately enter a complex reality like that of the Custody of the Holy Land and the ecclesiastical and social context in which as Friars Minor we are summoned to work. I will listen. I believe that the experiences of internationalism and service of the Order can help me be attentive to the various sensitivities and cultures.”

Father Patton, however, is certain of one thing: “My heart is in the Holy Land. Since I was informed of the appointment, I have begun to remember in my daily prayers the brothers who live in Syria, all those serve in the shrines with such great dedication and are engaged in the parishes and in the many social situations of the Custody; those who are engaged in the various centres, not forgetting the Father Commissaries, engaged in spreading the work of the Custody all over the world. I feel great affection and gratitude for them. They are precious to me and I feel them all united in prayer.”