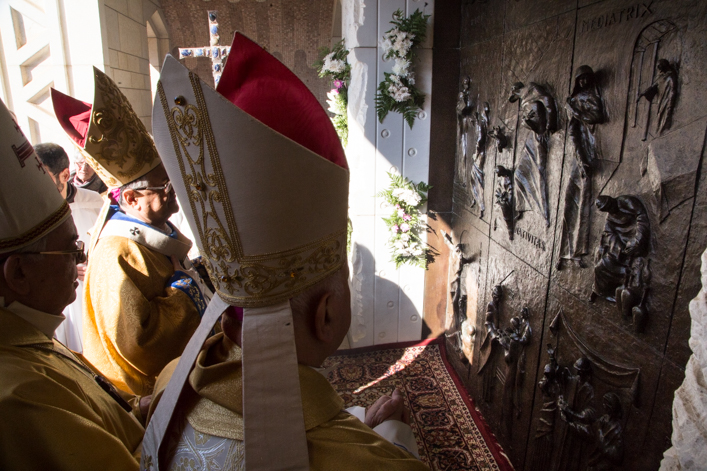 On Sunday, December 27, Nazareth celebrated the Holy Family and the opening of the holy door of the Basilica of the Annunciation. The Patriarch of Jerusalem and the Custos were both present.

The opening of the Holy Door of the [Basilica of the] Annunciation, on the occasion of the Year of Mercy, is not a first within the diocese. The door in Gethsemane kicked off the year [of Mercy] on December 13; the door in Gaza followed on December 20, and the door of St. Catherine’s Church in Bethlehem preceded midnight mass, on December 24.

At 9:30 a.m., the faithful gathered in front of the side door leading to the grotto. “Kul Saneh ou intou salmin!(“Merry Christmas and best wishes!”) is how the Nazarenes greeted each other. Soon the courtyard, which is decorated with mosaics of the Virgin from around the world, saw the arrival of a procession with the Patriarch, His Beatitude Fouad Twal, who was accompanied by Mons. Kamal Hanna Bathish, the auxiliary bishop and Vicar General emeritus, His ExcellencyMons. Giacinto-Boulos Marcuzzo, Patriarchal Vicar for Israel. The Custos, Br. Pierbattista Pizzaballa and his vicar Br. Dobromir Jasztal preceded them, in the company of many Franciscans. Prayers were sung, and the Patriarch hit the door with a hammer three times, thus opening it. The faithful then followed the procession through the door in order to get to the upper floor of the basilica, where mass was celebrated.

“We should rejoice for two reasons today: the opening of the holy door for the Year of Mercy and the feast of the Holy Family in Nazareth,” began the Patriarch. “But the circumstances are not encouraging,” he continued, recalling the consequences of war on families. “Faced with this violence and hatred, the response of the Pope was the gift of self: offering up a whole year of prayer for mercy for ourselves, and our respective nations and countries. For this occasion, the Custody of the Holy Land, along with the Latin Patriarchate, has set up a program of prayers, meetings, and conferences on the theme of mercy, spread out over the entire year. We must fully experience this Year of Mercy, especially here in Nazareth. For it is here that the Divine Mercy became incarnate for us all, by the mystery of the Incarnation,” he concluded.

At the conclusion of the mass, all were invited to join the procession to the Shrine at St. Joseph’s Church, also known as the children's home, so as to renew their vows to follow the Holy Family.