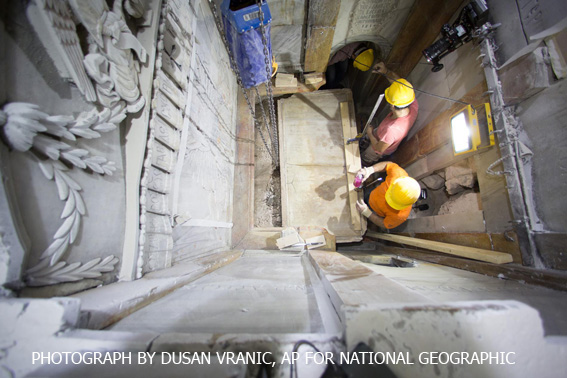 On Wednesday, October 26, there was the excitement in the air. It had been known about it since October 14. That day and the next day the shrine at the Basilica of the Holy Sepulcher was closed for refurbishment. What we had just learned was that the authorities who guard the Churches of this Holy Place were invited to attend the opening of the funeral bed.

The shrine is made up of two parts. The Angel's Chapel, in the middle of which sits a small altar that is a reliquary of the stone that closed the tomb and of the tomb itself, with a funeral bed, which is actually a marble slab that covers the area under which Jesus' funerary bed can be found.

Guests were hand-picked. At the top of the list were the Orthodox Patriarch Theophilos III, along with a small delegation from the religious and scientific communities. The Custos was not present, but the Custodial Vicar was accompanied by the Secretary of the Custody, and three friars, including Fr. Eugenio Alliata, the archaeologist of the Studium Biblicum Franciscanum. Also present on behalf of the Custody was Osama Hamdan, who is part of the scientific committee that is working on the project. A small delegation of Armenians, headed by Mons. Sevan, as well as the Copts of the Holy Sepulcher, were also present.

The event is of great important for the entire world. This is the first time since 1810 that the slab was moved. The previous time was in 1555 under the leadership of the Custos Boniface of Ragusa, who also authorized some work to be done when the shrine of his time—like today's—was showing signs of wear and tear.

Access to the shrine was closed from 2 p.m. onward. But the opening to the authorities was scheduled for 6 p.m., Holy Sepulcher time, or 7 p.m. elsewhere, because there is no daylight savings time at the basilica where time has not moved since the XIX century.
The event took place behind the closed doors of the basilica and under the lenses of the cameras. National Geographic, which has exclusive rights to the images, was also present with its video cameras. This explains our lack of pictures (for the time being).
In the tomb, workers were busy. In the afternoon, they worked hard to identify the marble slab. They now only have to pull it out horizontally about 20 centimeters.

Prof. Antonia Moropoulo, the director of the restoration project, welcomed Greek Patriarch Theophilos, Fr. Dobromir Jazstal and Mons. Sevan to the Angel's Chapel. Hardhats were provided for them, and she explained what they would see: sand. It is actually a marble filling used to prevent the slab from breaking if stress were to be placed upon it.
One after the other, the dignitaries entered the tomb. And they left after having been moved. However, they did not see Jesus' funerary bed. But they know that they were participating in a historical moment, and it was obvious that the [holy] place, on that day more than ever, exercised its power of attraction and emotions over its visitors.

Truthfully, all (or most) returned the following day separately. In the evening, the workers removed the sand and scientists came to make their analyses. On the morning of Thursday October 27, National Geographic released the video images taken the day before. In the courtyard of Saint Savior's Monastery, the few friars who were able to go to the Tomb, shared their impressions. Others decided to try their luck this Thursday. And in fact some will be able to enter and see.
And this time, it won't just be sand! The marble slab has been almost entirely pulled out. The sand has been removed. Another slab has been uncovered—one that is made of gray and is cracked. It is the same length but half the width as the one that covered it. The rest of it seems to have been broken off. One theory is that it could possibly be a slab that was laid down by the Crusaders. Scientists, who will deliver their findings in due time, have no certainty of this as of yet.

In the places where the gray marble is missing the rock can be seen. The original rock was Jesus' funerary bed, which was carved out of Jerusalem stone. In the stone, one can observe little canals that were carved into it. According to some, these canals are there for fluids to flow, and according to others, they are present as part of a Byzantine ritual of holy oil. The way the stone is cut could give experts an idea of the direction of the body. Was the head facing West or East?

Something that everyone noticed is the rock on which Christ's body rested is quite ordinary, but for those who are seeing it, it nothing short of extraordinary.

Everyone was moved. In front of the shrine, people shared their impressions. They checked with their neighbors to make sure that they have seen the same thing, or if there was something else that had to be seen. Intense emotion could be perceived on the faces of all of the men who are in the prime of their lives. Teary eyes were also not a rarity. One cannot help but think about the Easter sequence “Victimae paschali lauds”: Dic nobis Maria, quid vidisti in via? Sepulcrum Christi viventis et gloriam vidi resurgentis/ I saw the tomb of the living Christ and the glory of his resurrection.

The instructions were strict: it was prohibited to publish or to allow the publication of the pictures taken regardless of the type of device on which they were taken— and the Franciscans have respected the rules. But it is not prohibited to talk about the emotion that people experienced. And the messages on social networks were clear. A few hours later, those who were able to enter and see, like those who had responded to the invitation of the angels on Easter (Matthew 28:6), were still strongly moved and marked by this experienced, and they blessed the Lord for having experienced such a special day.

Their eyes they saw the exact GPS point where the Lord's body rested. They had been told that it was there.
It was shown to them like Jesus' open side before Thomas' finger, and whether they touched it or not, they came out of there with a single cry of joy:
Scimus Christum surrexisse a mortuis vere. Tu nobis, victor Rex, miserere.
We know that Christ is truly risen from the dead. May you, victorious King, have mercy on us.