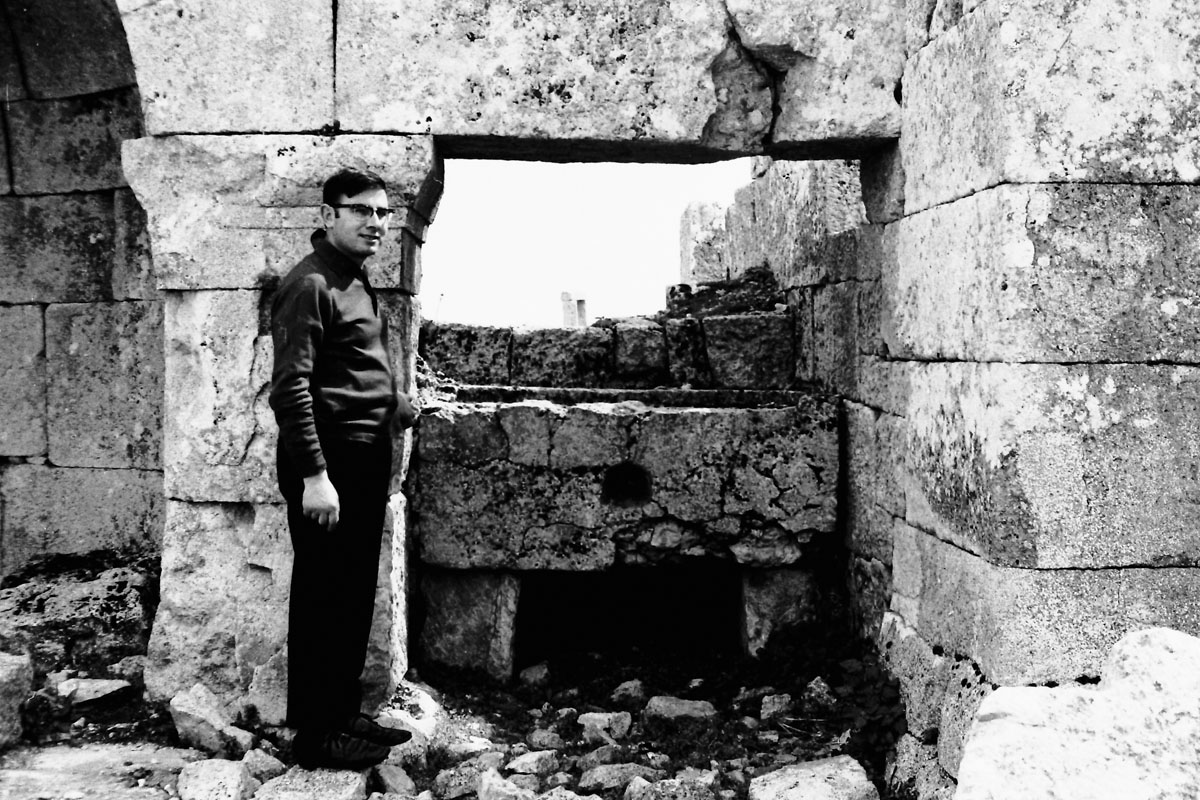 From the sky Brs. Ignacio Peña, Romualdo Fernández and Pasquale Castellana, arm in arm, lean toward St. Savior’s Monastery in Jerusalem, leaving tears of joy flowing. An unfinished part of their work is being worked on and will be on display as part of a new exhibition.

The three Franciscans, two Spaniards and one Italian, during all of the years that they spent in Syria serving the Custody, traveled through the country discovering its ancient heritage. They specialize in the Christian archaeology of the area known as the Limestone Mountain Range. Their work led, among other things, to the publication of four inventories (1). The work was significant enough for the three religious to be honored in 2009 with the “Pro Ecclesia et Pontifice” (for the Church and the Pontiff) medal by Pope Benedict XVI “for their service to the Church and to the Papacy.”

However, to the great displeasure of their authors, the books had not been able to offer necessary space for the photographic heritage of the inventoried sites. So, in the archives, one could find thousands of photos, papers, films, slides. Since Brs. Ignacio and Pasquale, who have now died, (the former in 2010 and the latter in 2012) were unaware of the events that have been shaking Syria since 2011. Br. Romualdo, the youngest of the trio, had one concern during his stay in Jerusalem at the end of 2012: his health declined and he was from then on the only person who could legend the images and he left it up to the Custody to digitize them.

On some level, it was at his request that the photographic department of the Historical Archives of the Custody be opened, entrusted to Br. Sergey Loktionov. In 2013, the latter called on a volunteer, Rossella, to sort through this pile of photos, arranged in scattered envelopes. “Without Rosella’s work, I could not have done mine,” said Emmanuelle Main. For the past two years, she has carried on the tradition. “Rossella took the photos out of the envelopes, put them in plastic sheets (meeting preservation standards). She drew up the first list of the inventory of photographic heritage. She has done a job that is as thankless as it is necessary. While this work was being carried out, the health of Fr. Romuald, still in Syria at the time, did not allow him to leave the country and come to the monastery infirmary in Jerusalem. As for the political situation, it did not allow him to obtain any more documents to annotate. When Emmanuelle began her work in 2015, she found herself cut off from those she had come to know and from the photographs she was digitizing.

A trained historian, Emmanuelle had to discover all of the different technicalities in regards to digitization. But this was not her biggest challenge. “I was there to digitize pictures and to fill in information about them. But on what basis? Annotations by the friars were extremely rare. The Arabic names varied from one author to another. Who could ensure that in the envelope all of the photos attributed to a site actually came from it? Her exceptional visual memory allowed her to accurately triage what she uncovered. “By looking at the photographs frequently, one can understand that the vegetation or the geography of such a site would not allow such a picture to be taken there.”

Emmanuelle, from the depths of a Jerusalemite convent, some 500 kilometers as the crow flies from the Syrian Limestone Mountain Range, now in the hands of the rebels (having taken the Islamic caliphate in the East and the Syrian army in the West in a stranglehold), became a detective thanks to Google to the point of getting to know the region as well as the good Franciscan friars themselves, or almost as much...

After the starting out by fumbling around, we must hear her talk about Dar Qita, Djeradeh, Djebel Zawiyé, up to the grove in the heart of the Kefert Aqab (Djebel Wastani) site. Listening to her, you feel ready to hop into a Jeep and “when leaving the village, make the first right,” to go with her to look at the Syriac inscription that is being measured by Br. Romualdo in Banabel, or to try to decipher the first words of the Our Father in Greek photographed in Frikiya.

For two years, Emmanuelle has not only become a visual expert in the Syrian archaeology of the Limestone Mountain Range. She has not only digitized some 10,000 photographic documents; she has created a 282-page database, for 326 sites.

Each entry presents all of the writings of a place and describes the picture whose filename is clearly codified. Moreover, on the very precious Google Earth platform, Emmanuelle pointed out each of the sites.

Next to the photos of the “Peña Collection,” named after the “Three Musketeers,” as Emmanuelle affectionately calls the three [friars] who took the most photographs. Emmanuelle created another folder of more recent images found on the Internet. She organized all of the information she read by citing the online sources. Thus, for example, one can learn about the Lion of Chnan that was destroyed in the 1990s, as described in an article by Prof. Marc Griesheimer found with the picture.

This is really the purpose of these pictures, their preservation and their documentation: to conserve the trace of an ancient past full of richness and often full of exceptional beauty that was already threatened but that in the last few years has had to endure the ravages of war and pillaging.

This work, ordered by the Custody, will be partly presented on October 17 in Jerusalem as part of the festivities of the 8th Centenary of the Franciscan presence in the Middle East. But the question remains to be answered: is it so valuable that it should be made available to researchers? Is it is so much in danger that one should not run the risk of sharing it with those who would like to see it destroyed for reasons that are beyond understanding.

The Custody will have to make these decisions and find funding for its ambition to promote and honor the expert work of its religious.