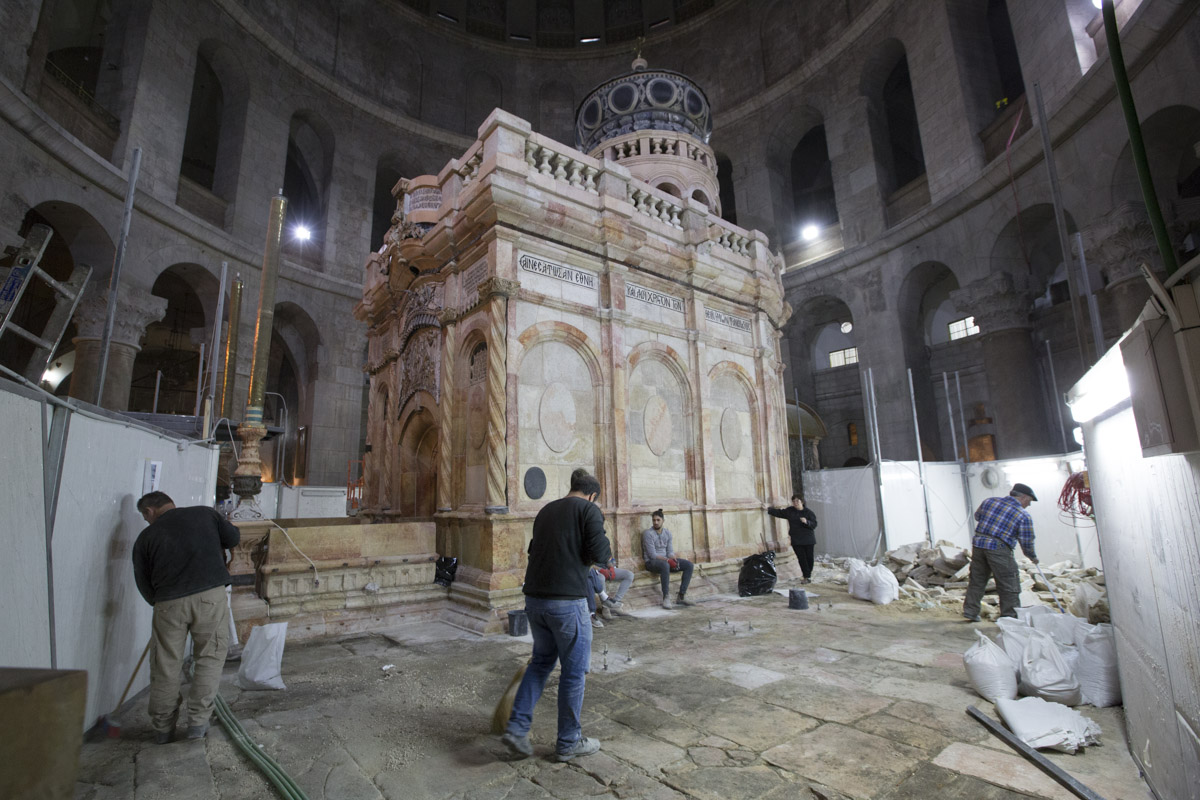 Four days from the ecumenical celebration of the work completed on Jesus' tomb, the Basilica of the Resurrection is filled with the sound of vacuum cleaners. Day and night, the teams of Prof. Moropoulou have been working on the last projects in and around the Edicule. Everything must be ready by Wednesday at 10 a.m., when the churches will gather together in prayer to contemplate the results of 10 months of intensive work.
The representatives of the three churches signing the agreement to undertake this work include: H.B. Theophilos III, the Greek Orthodox Patriarch, Fr. Francesco Patton, the Custos of the Holy Land, H.B. Nourhan Manougian, the Armenian Apostolic Patriarch. Beside them will also be Mons. Perbattista Pizzaballa. Today, he is the apostolic administrator, but he signed the agreement when he was still Custos of the Holy Land.
Naturally, all of the patriarchal auxiliaries of the Churches of the Holy Sepulcher, Copts, Syriacs and Ethiopians will be present, as well as representatives of the other Christian denominations of the Holy Land, but distinguished guests will also join in the celebration. Firstly, the Patriarch of Constantinople Bartholomew I. The last time he visited Jerusalem, it was on the occasion of Pope Francis' visit in 2014, following his predecessor Athenagoras 50 years prior. His presence in this place and on this day reflects the ecumenical initiative that the Churches wanted to experience on the occasion of the work. It is rumored that the Holy See will also send a high-ranking official [for the occasion].
We know that Rome is closely following the ecumenical advances on the site as they have been unfolding in recent years in the Middle East. As for Jerusalem, a press release from the Custody announced on Saturday that the Pope had made a very substantial donation to the works of the Holy Sepulcher and the Nativity, granting a budget of one million dollars for the two projects. The press release of the Custody of the Holy Land even specified that the budget of $500,000 dollars allocated to the work on the Holy Sepulcher is for the work that is still to come. Indeed, on the eve of finally seeing the Edicule released from its crutches, it has been confirmed that the churches are considering the agreement which would open them up for a second phase of work requested by Prof. Moropoulou in order to ensure the continuity of the first phase .
The Edicule that encloses what remains of Jesus' tomb as a frame has been consolidated, repaired, stabilized, cleaned but not all of the causes of its embrittlement have been eliminated and specifically not the issue of chronic moisture.
As we know, the city of Jerusalem is literally built on rock. What is less known is the fact that it rains in Jerusalem as much as it does in London, and that this water, once it has reached the level of the rock, unable to flow, either stagnates or rises by capillarity or evaporates, generating a high level of humidity in all of the city's buildings, including the basilica. Adding to this, the puddles of water in the basements of buildings caused either by the ruins of previous buildings or by aging pipes. All of these ingredients come together such that despite the work that was completed on the Edicule, water and moisture resume their undermining slowly but surely.
Meanwhile, on Wednesday, March 22, at 10 a.m., the few guests present will not be able to hide their delight. One could maybe not prefer the Ottoman baroque style in which the building was built but one can only admire the result of the work.
In the center of the gray rotunda, the Edicule stands proudly, without the oil lamps and the other decorations of the Churches (which should be postponed for a later time) it has the freshness of a newborn. One must admit that the change is astounding and well worth the effort. The photos will soon be available but for now, the fence surrounding the site has not yet been removed.
In another four days, the anticipation and excitement increases among successive teams with the photographers eager to take the most beautiful shot. To be continued...

The work was completed on the basis of an estimate putting it at $3.5 million. To date, it has not been revealed to the press whether this amount has been exceeded or not
They were financed by the three main Christian denominations of the Holy Sepulcher: the Greek Orthodox, the Franciscans and the Armenians. In addition to their contributions, there was also public funding by the Greek government and private benefactors. The World Monuments Fund (WMF) has been a major player in meeting the necessary funds.
In the region, King Abdullah II of Jordan made a “makruma,” a royal donation of benevolence and the Palestinian authority did not want to be outdone and so it also participated.
The new phase of work has already been estimated at a cost of $6 million. It will consist in lifting the entire pavement around the Edicule, re-building all of the pipes, restoring all of the pavers or replacing them with pavers in an identical style, consolidating the foundations of the shrine and guaranteeing the seismic stability of the structure's floor. In all likelihood, this work should also be an opportunity for archaeological excavations. They will be in line with the excavations already carried out by Fr. Virgilio Corboz, OFM, in the 1960s.
----
Related articles

Shrine of the Holy Sepulcher without crutches

I saw the tomb of the living Christ

What is happening behind the fences around the tomb?

The restoration work at the Holy Sepulcher can now be seen

Christ's tomb to be restored soon

A few centuries later, the Holy Sepulcher will be restored

Jerusalem: Christmas greetings are exchanged between the Christian confessions

The Biblical scholar Frédéric Manns has died in Jerusalem