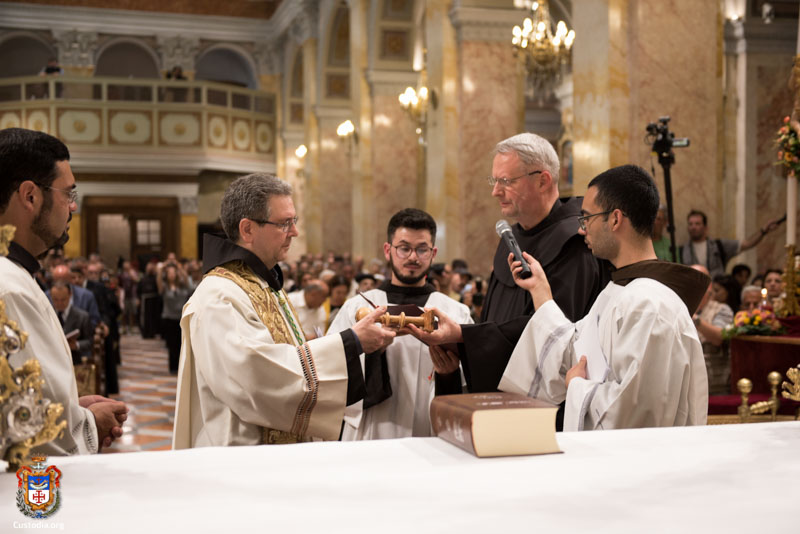 It had not happened in twelve years. A new Custos of the Holy Land, Franciscan friar, Br. Francesco Patton, made his solemn entry into Jerusalem. Yesterday he was the new Custos-elect and today he is the Custos in office. The handover was made at a ceremony which took place at Saint Savior’s Monastery.

Before that, at the Jaffa Gate, a crowd composed of many religious, Christians of all denominations, onlookers who were surprised by all of the hustle and bustle, church and civil authorities, rushed to the entrance in the Western part of the city, through which time-honored solemn entries have been made for a very long time.

At 3:29 p.m., the Custos’ car dropped him off at the Jaffa Gate. The Custos came out, shook people’s hands and embraced several people. The Custody’s secretary presented several important figures who were present. The Custos was smiling and trying to be present for each person. This event brought about the usual joyful chaos that can be expected from this kind of event. And Fr. Francesco could not completely hide his surprise or even his legitimate apprehension when diving into the deep end at the Mother Church of Jerusalem.

The atmosphere was joyful and one could distinguish comments about his height and smile. He was congratulated and people sympathized with him for having to be rushed around all over the place and for his having to discover so much at the same time.

Then, the kawas began drumming and the procession moved to St. Savior’s Monastery to the sound of Lauda Jerusalem Dominum while the bells at St. Savior’s rang in full force. At the head of the procession, there were kawas in solemn garb belonging to all of the churches, and they were followed by the Franciscan friars, two by two, and by the Custos, who himself was surrounded by his predecessor and the visitor, Br. Jakab Varnaio. Behind them, the apostolic delegate to Jerusalem for Palestine, the Apostolic Nuncio to Israel, Mons. Giuseppe Lazzarotto, representatives of the Latin Patriarchate of Jerusalem, the heads of the churches, the general counsel present in Jerusalem, civil authorities and the crowd also followed the procession.

At the bottom of the nave of the church, Br. Stéphane Milovitch, the guardian of St. Savior’s Monastery, was waiting for the Custos. He handed him the holy water and the cross for him to embrace and finally the incense.

After the Te Deum, the canonical visitor spoke. He invited the new Custos to remember that St. Francis himself expected his brothers, including superiors “have come to serve.” “The Lord calls you,” Fr. Francesco said solemnly, “to take good care of your brothers and the entire heritage of the Custody, as well as all of the people of Christians connected to it.”

Br. Jakab Várnai went on to warmly thank Fr. Pierbattista Pizzaballa for all of the work he has done in recent years. He then read the official nomination decree, in Latin and English. The congregation applauded. They were then heard the voice of the new Custos. Certain, strong, confident. Standing before the altar, he said the Creed and was sworn in by pronouncing the last words with his right hand on the Gospels:

The Custody’s visitor, Br. Várnai Jakab, gave him the seal of the Custody and Francesco Patton officially became Custos. After a singing to St. Francis, the Custos spoke.

He first spoke in English at the meeting so as to thank each person for their presence and like another Francesco, he asked for everyone’s prayers. In Italian, the official language of the Custody, he spoke directly to his brothers. “I received this request (to accept the office) as a new call and I answered as I did on the day of my first profession. I feel like a novice (...) but it the Lord is our Custos. (...) And I ask you to welcome me as well as a new brother.”

Words of humility that were indeed Franciscans, and during which he did not fail to also thank his predecessor.

Then the hundred Franciscans present, representing all of the monasteries in Israle, Palestine and Jerusalem, came to embrace him as a sign of welcome and to show him their obedience.

Despite the solemnity of the celebration, the atmosphere was clearly joyful, which was followed by a snack. Many religious, but also Christians from Jerusalem and employees of the Custody gathered around the new Custos for a few words and pictures.

The Custody of the Holy Land has a new Custos. He has come from far away, but he has found a new brotherhood to love, a people to serve, and his steps are following those of Jesus Christ more than ever.