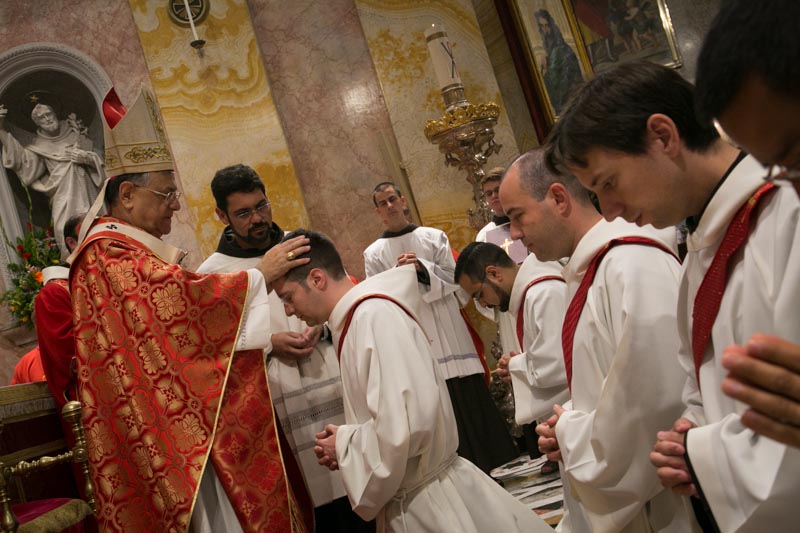 Saint Savior’s Church was packed on June 29 for the feast of Sts. Peter and Paul and for the ten Franciscan ordinations. Among them were six priests and four deacons. Some were from the Province of the Custody of the Holy Land, and others were sent here for all or part of their seminary studies and will return home. They do not all yet know the mission with which the church will entrust them now or in the years to come.

Among them, Br. Mario, OFM, is a native of Mexico. After four years in Jerusalem, he is preparing to go back home. “It is a very rich experience to study here, being in contact with international students. This shows us the reality of other provinces and helps us to understand the universality of the Order of Friars Minor. Being in the Holy Land also allows us to better understand the Scriptures.” Welcoming of foreign students allows the Custody to make the brothers in other provinces aware of the importance of its role as the guardian of the holy places. “I will ask for a special certification to be able to accompany groups of pilgrims. And then, having lived here, I have good knowledge of the Custody and of what it does, and I will create awareness of this in Mexico!” he added.

Br. Andrew is one of the new deacons and he is most known by pilgrims. A sacristan for 15 years at the Holy Sepulcher, he asked to become a permanent deacon in this Year for the Consecrated Life. “This allows me to serve God, the Church and the people” Having studied theology with the Salesians, Br. Andrew will now be able to carry out his ministry at the Holy Sepulcher. He will thus serve more pilgrims from around the world who attend many masses there.

The feast had begun the day before first vespers. Then, an hour of adoration was organized in order to pray for vocations and invoke the Holy Spirit in preparation for the ordinations.

The mass was presided over by His Beatitude Fouad Twal, the Patriarch of Jerusalem. The apostolic delegate Monsignor Giuseppe Lazzarotto and representatives of various Christian churches of Jerusalem were also present, accompanied by many priests. The smell of incense filled the air, and the June heat made those present grateful for the fans scattered around the church. For the litany of the saints, the ten brothers lay, with their faces against the ground, kneeling before an assembly that was visibly moved. The deacons received the Gospel and their liturgical vestments with cheerful and serene smiles. The priests were anointed in the palm of their hands, and so was the chalice. After the Patriarch laid hands on them, so did the concelebrants and they then expressed their joy with brotherly embraces.

In his homily, the Latin Patriarch of Jerusalem, His Beatitude Fouad Twal, highlighted the major commitments, responsibilities and sacrifices that choosing this mission entails, against the tide of today’s society. “The Church offers many ways to fulfill your mission: there is a cross to bear, a lack ofu understanding to endure and a Franciscan habit to wear, with all of the consequences that come with it.” In this hardship-filled context, the newly ordained are called to demonstrate even more love, forgiveness and justice.

“Each of your ordinations today is the culmination of many years of study, experience, human knowledge and great preparation. But it is also a responsible and conscious starting point, a beginning with an international dimension, like the city of Jerusalem is, which embraces and welcomes all believers.” And he ended with the following words: “Your ordinations are a gift from God to the Custody and a gift from the Custody to the local and universal Church.”

The Custos, Fr. Pierbattista Pizzaballa, OFM, closed the celebration by thanking all of the families in a special way for the gift of their children to the Order and to the Church. The congregation then gave their well wishes to the ten newly ordained inside the church. Kissing their hands and receiving blessings, family and friends, Christians from Jerusalem and from around the world, Franciscans and other religious congregations all rejoiced together. All were then invited to a buffet in the Cura’s reception hall.

The second solemn vespers for the feast of Sts. Peter and St. Paul were presided over by the newly ordained on the evening of June 29. For the occasion, they wore liturgical vestments that had been offered to the Custody by King Louis XIII of France (seventeenth century).