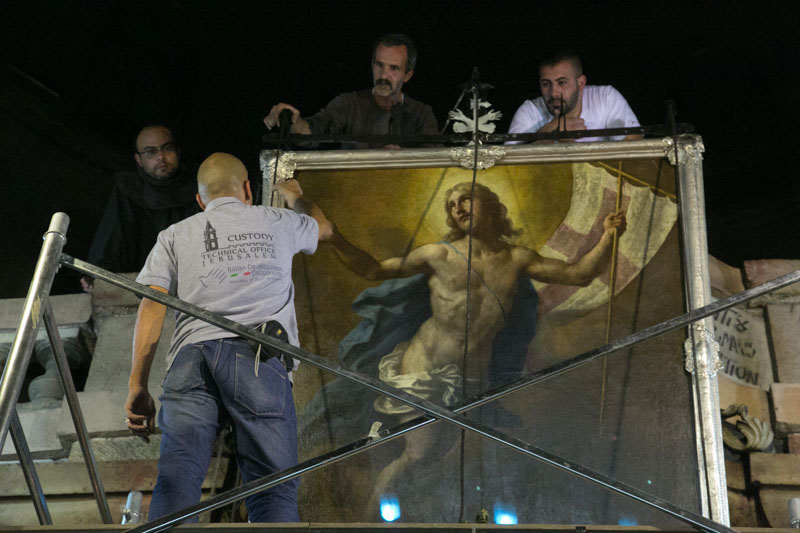 Monday, September 23rd, 2013, Maurizio Canesso, art dealer and specialist in XV and XVIII Century Italian sacred art, is in Jerusalem for a study trip with the ambitious project of restoring a number of works in the Custody of the Holy Land’s possession.

In Canesso's previous trips to the Holy Land, his expert eye had identified several works. This time he was accompanied by Professor Nicola Spinosa, Director of the National Museum of Capodimonte in Naples, Italy. Both, atop a ladder set in front of the empty tomb of Jesus in the Holy Sepulchre, with a flashlight they closely examined the 1.51 x 1.42 cm oil painting (59.4 x 55.9 in)that dominates the aedicule.

The Custody’s archives dates its presence prior to 1808, date of the conflagration that destroyed part of the Church of the Resurrection. Restored in 1860, in Malta, the painting had since been subject to its environment’s ordeals: moisture, dust, and the candles’ and oil lamps’ smoke had blackened it again.

In an instant, Professor Spinosa identifies the artist, “It’s a 'De Matteis’,” he says with an enthusiastic voice that pierced the quietness of the Basilica. Paolo De Matteis (1662-1728) was trained in Naples and was at the service of the Spanish viceroy in that same city. According to Professor Spinosa, it is certainly this same painting that inspired the silver bas-relief (literally a "low relief”, a sculpture technique in which elements are barely more prominent than the background) located in the Chapel of the Apparitions adjacent to the sacristy.

The decision is made, if the Status Quo governing the Holy Sepulchre gives the permission, that the painting will be lowered to undergo restoration. Status Quo has permitted it; A few weeks later, the Custody’s Technical Office undertook the task to replace the painting with an image of another scene of the Resurrection, for Status Quo obliges: a vacant space is a lost space.

Saturday, November 22nd, 2014, the pilgrims who had registered for the overnight in Holy Sepulchre, hoping to pray in the empty tomb of Jesus in quietness and tranquility, were caught by surprise. That evening, seizing the Basilica’s weekly closing (1), the Custody’s Technical Office, in agreement with other Christian denominations, had put the De Matteis in its place.

A year later, because in addition to its restoration, which took nearly three months, the painting had been displayed in Lugano, at Mr. Canesso initiative. Other paintings of the Custody have also been displayed at the same occasion along with the bas-relief of the Holy Sepulchre, which had been previously admired by visitors at “The Treasure of the Holy Sepulchre” exhibition hosted at the Palace of Versailles.

It is back "home" to resumes its service: reminding us that the tomb is empty because Christ is truly Risen.

By dint of experience, this time a scaffolding was installed. Under the supervision of Fra Sergey Loktionov and the direction of Issa Shaheen, the Custody’s workers, wearing white gloves, carefully handled the restored painting. It is much heavier than when it was brought down. In order to preserve the restoration work carried out by Serge Tiers’ atelier in Paris, it is now protected from the front with a special glass plate, while the back is covered with a polypropylene honeycomb allowing air flow and dust suppression.

A Greek Orthodox monk assisted the workers. The gilded wooden representation of the Holy Spirit, belonging to his Church, is attached to the front and was in the way of the maneuver. He dismounted it and will put it back in its place himself. From time to time, Copts and Armenians pass by to see the work’s progress. Some pilgrims went to find some silence at Calvary, others happily remained to see this bit of the Basilica’s history. Hélène, a French volunteer, smiles at the sight of the building’s and the tomb’s “profane" life and is thrilled to see the different faiths working together and helping one another.

The media of the Custody have documented the event both in video and in photographs. They will be shared with those who brought the restoration of the painting to its accomplishment, and, hereby, the Custody thanks them warmly.

1. On Saturday night, the doors of the Holy Sepulchre close at the usual time (7 pm in winter) to re-open at 11 pm and then stay closed until Sunday morning. A quota of pilgrims must register in advance with the sexton of their rite; only then are they granted the permission to remain in the Basilica during those quiet hours. Those hours are dedicated to silent prayer and precede services of the various Churches that succeed one another overnight.