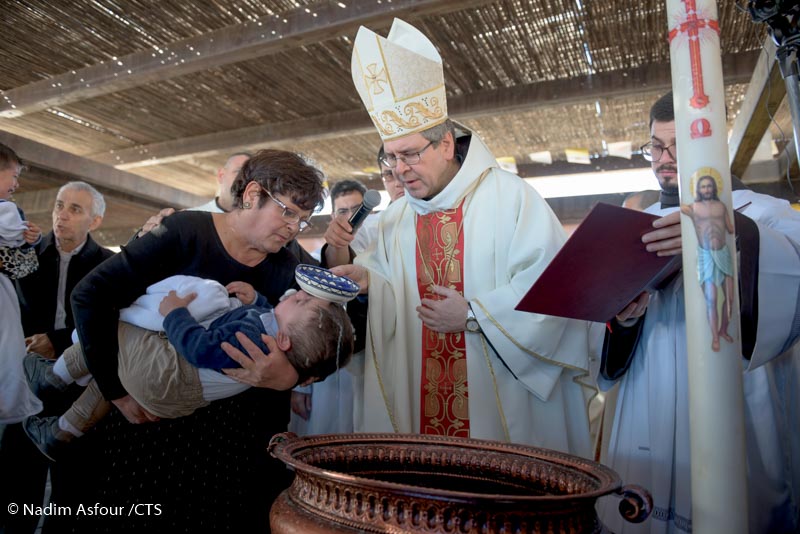 The air is crisp on this January morning in Jerusalem, as people are rushing to get on buses and then to depart. Reciting the Our Father is always the best way to start a pilgrimage, which is what Br. Stephane did on January 8 for the parishioners of Saint Savior’s. The destination was one of the most anticipated ones of the year: the Jordan River, on the day of Jesus’ baptism. Numerous friars, nuns, pilgrims, parishioners and volunteers of the Custody participated on the day of prayer.

A meeting with authorities from Jericho began in the morning. The Custos of the Holy Land, Fr. Francesco Patton, was sitting between the mayor of Jericho and the authorities that gathered in the local Franciscan monastery. On a warm, sunny morning, the traditional official meeting was held outdoors on the monastery’s manicured lawn. Br. Mario Hadchity, guardian of the fraternity of Jericho and director of Terra Santa School, made the first comments, followed by the authorities present: “I want to thank you for the warm welcome extended to me and to everyone else,” said Br. Francesco Patton, “and I’d like to take this opportunity to thank you for your extraordinary cooperation with the friars from Jericho and the Custody of the Holy Land.” The Custos said that Jesus went through Jericho many times and that it is therefore an important place to pray for peace, for the local people and for the prosperity of the city.

The January 8 pilgrimage came alive when the bus reached the banks of the Jordan River for the solemn mass. Near the river, there are several enclosed areas due to the presence of mines. Where it is possible to walk safely, a long procession marched to a large area that had been prepared for the liturgy. In the place where Jesus was baptized by John the Baptist and in which a voice from heaven pointed him out as the Anointed One, hundreds of people were present to remember the event. “In this celebration you, as parents, have brought your children to be baptized, to receive the gift of becoming God’s children, through the Holy Spirit. We hope you will be able to raise these children as children of God,” said Fr. Francesco Patton in his opening remarks, since two baptisms were planned for that day. After singing the Gospel in Arabic, Br. Mario Hadchity gave the homily. Then, with water from the Jordan River, and with the emotion of the faithful, the Custos baptized the two little ones, George and Lucas. “Thank you, Father Custos, for today we have two new children in the Church,” said Br. Mario, followed by a loud applause of exultation.

In the footsteps of Jesus, for over two hundred years, the day of His Baptism, it is also customary to go to the Greek-Orthodox monastery of the Temptation. Recognized for centuries as the place in the mountain of Jesus’ temptations, and after being abandoned for years, it has been active again since the end of the 1800s. The faithful walked the steep path leading to the monastery built into the rock, before which the Gospel of the Temptations was proclaimed. It was then the time for the pilgrims’ visit and for personal prayer and meditation. It was in the desert, in front of that extraordinary landscape, that Jesus was tempted by the devil, according to tradition. And for a Christian, the greatest gift that the Holy Land can offer is to walk on that land and to discover those places where Jesus lived. It means getting closer to Jesus, [who was] human like ourselves.