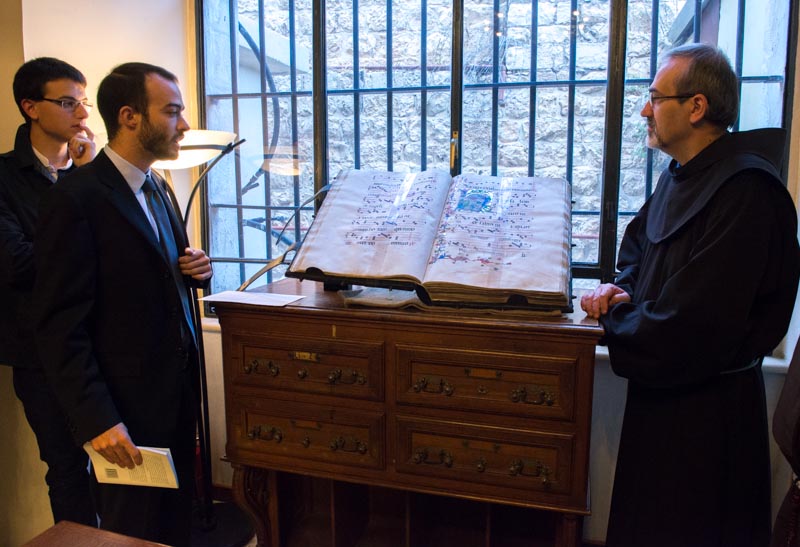 The exhibition Manuscripta Franciscana Hierosolymitana took place on Thursday, October 23th at the Library of the Custody of St. Saviour’s Monastery. The program: blessing of the new stained glass window,guided tour of the 35 exhibited manuscripts, conference in the afternoon.

Before an attentive audience, the former director of the Library, Fr. Marcello Badalamenti, and the current director, Fr. Lionel Goh, took the floor in the morning to explain the project.This exhibition crowns two years of work that led to the indexation of the 550 library manuscripts and to the creation of an online catalogue (See our article).

This was also the opportunity to present and bless the stained glass window of Blessed Gabriele Allegra OFM, translator of the first Bible in Chinese. The work was designed by CalogeroZuppardo and Roberto Alabiso, located in the Library.

Fr. Pierbattista Pizzaballa, Custos of the Holy Land,paid homage in his speech to the project participants including CRELEB of the Catholic University of Milan, the European research centre on books, publishing and libraries, Association pro Terra Sancta, the NGO of the Custody of the Holy Land, and all the students and volunteers.Their work helps to make public and available to researchers worldwide witness documents of the Holy Land history."Their growing enthusiasm and support are invaluable in these difficult times for the region," he stressed.

"An important and significant aspect of the history of the Holy Land emerges from the exhibition: the interaction of cultures and religions.Arabic texts written in Hebrew characters, or an encyclical translated into Turkish that was written using the Armenian alphabet... In a political climate such as this, where fanatics seek to destroy all coexistence, it is important to show that the history of the Middle East has left us a legacy of diversity.Religions and culture have been transmitted; they have interacted and “contaminated” one another. “These books are the formal proof and it is essential to keep revealing this history through our communal work.”

Marcello Mozzato, who worked for several months on the inventory of manuscripts, led the guided tour of the 35 manuscripts, explaining their characteristics and their value, focusing on his favorite one: "This is in Latin and contains letters of St. Cyprian of Carthage, St. Augustine treaties and apocryphal texts. It was well preserved and therefore, no restoration was required.”

The exhibition reached its goals: many people came throughout the day, including teachers from different Israeli and Palestinian universities, such as Ben-Gurion and Al Quds. "To make our manuscripts available to scholars from different backgrounds is exactly what we wanted," said an enthusiastic Fr. Lionel Goh. “After the catalogue was released online this summer, we were contacted by researchers from the United States , Sweden, England, Poland ... In this small world of research we begin to be recognized internationally. We are making progress.”

The exhibition was not restricted only to academics: Franciscans, students, bystanders and even several classes of the French secondary school came to admire the manuscripts.

The event ended with a lecture given by Professor Michele Campopiano, from the University of York."The Franciscans guided the pilgrims to the Holy Land in the Middle Ages, but they also studied with them many different maps and texts of the holy places. We have forgotten the central role of the friars in the representation that Europeans had of the Holy Land and also of the life and passion of Christ. It is on this that my work is based, through the study of Franciscans manuscripts of Jerusalem’s monastery between the fourteenth and sixteenth centuries.” The introduction of Fr. Lionel Goh reaffirmed the importance of this research: “Study the past because it contains the present. This Chinese proverb applied to the Middle East, speaks of a time when collaboration was encouraged. The medical, political, economic or cultural documents of the Franciscan archives are the proof”.

Helping people from different backgrounds to study the past together, creating networking opportunities in the present and thus allowing the future to be written in the context of exchange and collaboration…this exhibition day at the Library was a beautiful stage of this great mission.