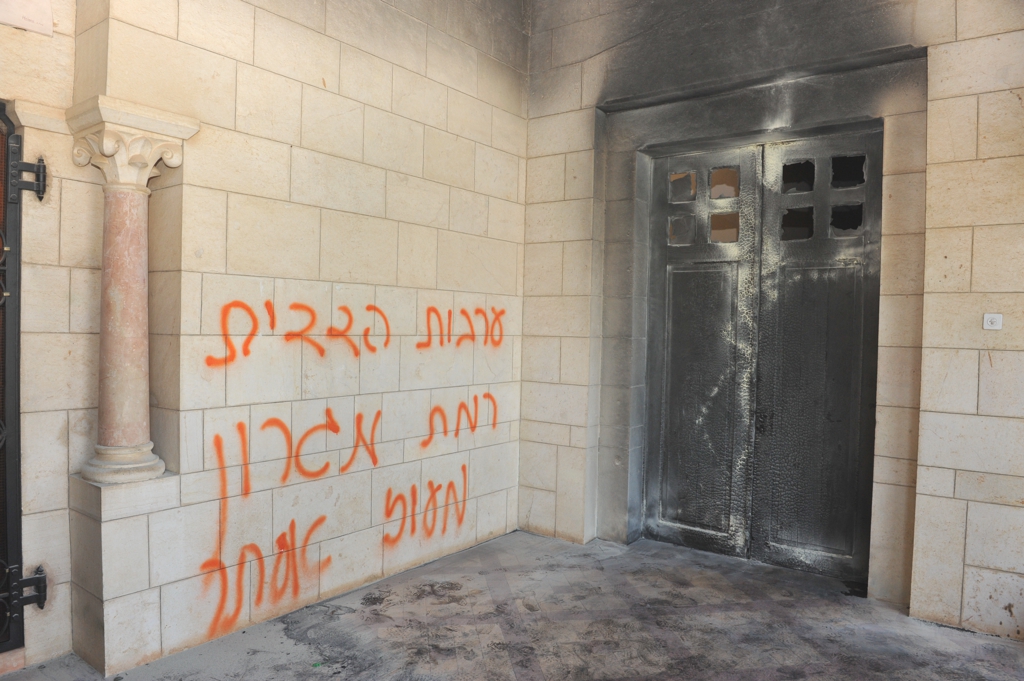 The Christian community awoke this morning, Tuesday, September 4, 2012, to discover with horror that once again it is the target of forces of hatred within Israeli society. In the early hours of the morning, the door of the Cistercian (Trappist) monastery in Latroun was burned and anti-Christian graffiti was sprayed on the walls.
The monks of Latroun have dedicated their lives to prayer and hard work. The monastery is visited by hundreds of Jewish Israelis each week and they are received with love and warmth by the monks. A number of the monks have learned Hebrew and promote mutual understanding and reconciliation between Jews and Christians, according to the teachings of the Catholic Church.
Sadly, what happened in Latroun is only another in a long series of attacks against Christians and their places of worship. What is going on in Israeli society today that permits Christians to be scapegoat and targeted by these acts of violence? Those who sprayed their hateful slogans, expressed their anger at the dismantlement of the illegal Jewish settlements in the West Bank. But why do they vent this anger against Christians and Christian places of worship? What kind of “teaching of contempt” for Christians is being communicated in their schools and in their homes? And why are the culprits not found and brought to justice?
This morning, the Christians in Israel are asking many questions as they grieve and seek consolation and assurances. The time has come for the authorities to act to put an end to this senseless violence and to ensure a “teaching of respect” in schools for all those who call this land home.
“Which of you desires life, and covets many days to enjoy good?Keep your tongue from evil, and your lips from speaking deceit.
Depart from evil, and do good; seek peace, and pursue it.”
(Psalm 34:12-14)
Signatures
+ Fouad TWAL
Patriarch of Jerusalem for Latins
President, A.C.O.H.L.
+ Giorgio LINGUA
Apostolic Nuncio for Jordan
Rt Rev. Waldemar S. SOMMERTAG
Chargé d’Affaires of the Apostolic Nunciature for Israel
+ Michel SABBAH
Latin Patriarch of Jerusalem Emeritus
+ Elias CHACOUR
Melkite Catholic Archbishop of Akka
Vice president, A.C.O.H.L.
+ Yaser Al-AYYASH
Melkite Catholic Archbishop of Petra and Philadelphia (Amman)
+ Mussa El-HAGE
Maronite Archbishop of Haifa and the Holy Land
Maronite Patriarchal Vicar for Jerusalem
+ Joseph SOUEIF
Maronite Archbishop of Cyprus
+ Boutros MOUALLEM
Melkite Catholic Archbishop of Akka Emeritus
+ Gregoire Pierre MELKI
Syrian Catholic Exarch of Jerusalem
+ Joseph Jules ZEREY
Melkite Patriarchal Vicar of Jerusalem
+ Maroun LAHHAM
Latin Patriarchal Vicar for Jordan
+ Giacinto-Boulos MARCUZZO
Latin Patriarchal Vicar for Israel
+ William SHOMALI
Latin Patriarchal Vicar for Jerusalem and Palestine
+ Kamal-Hanna BATHISH
Latin Auxiliary Bishop Emeritus
+ Selim SAYEGH
Latin Auxiliary Bishop Emeritus
Msgr. Joseph KELEKIAN
Armenian Catholic Exarch of Jerusalem
Very Rev. Pierbattista PIZZABALLA, O.F.M.
Custos of theHoly Land
Rev. David NEUHAUS, S.J.
Patriarchal Vicar for Hebrew speaking Vicariate
Rev. Evencio HERRERA DIAZ, O.F.M.
Latin Patriarchal Vicar for Cyprus
Rev. Raymond MOUSSALLI
Patriarchal Vicar in Jordan for Chaldeans
Rev. Pietro FELET, scj
Secretary general